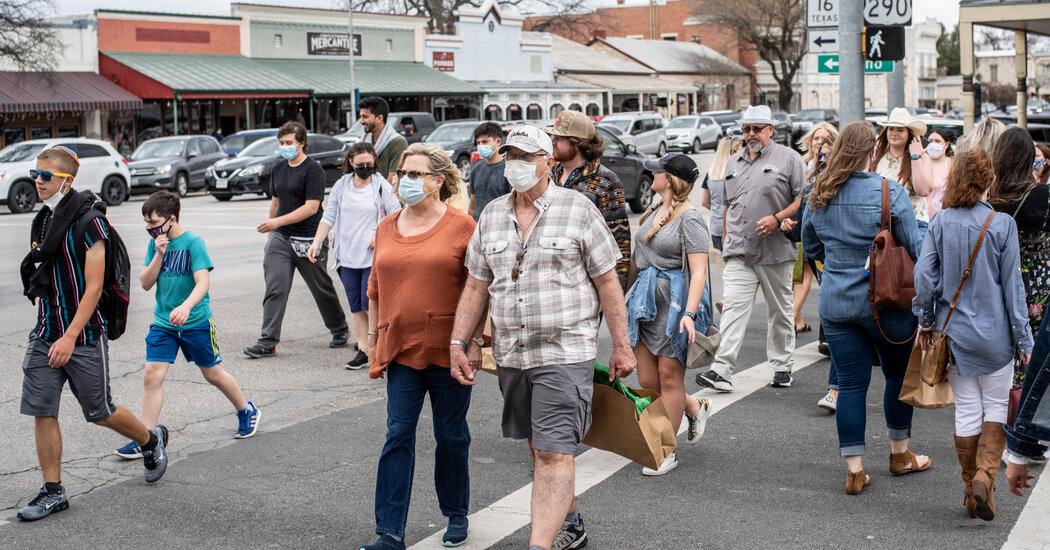 Americans on the right half of the political spectrum have tended to underplay the risk of Covid-19. They have been less willing to wear masks or avoid indoor gatherings and have been more hesitant to get vaccinated.

These attitudes are part of a larger pattern in which American conservatives are often skeptical of public-health warnings from scientists — on climate change, air pollution, gun violence, school lunches and more. In the case of Covid, Republican politicians and media figures have encouraged risky behavior by making false statements about the virus.

To many liberals, Covid has become another example of the modern Republican Party’s hostility to facts and evidence. And that charge certainly has some truth to it. Yet the particular story with Covid is also more complicated — because conservatives aren’t the only ones misinterpreting scientific evidence in systematic ways. Americans on the left half of the political spectrum are doing it, too.

That’s a central finding from a survey of 35,000 Americans by Gallup and Franklin Templeton. It finds that both liberals and conservatives suffer from misperceptions about the pandemic — in opposite directions. “Republicans consistently underestimate risks, while Democrats consistently overestimate them,” Jonathan Rothwell, Gallup’s principal economist, and Sonal Desai, a Franklin Templeton executive, write.

a major source of transmission, and Covid has killed about 15 times more Americans than either the flu or vehicle crashes do in a typical year.

Democrats, on the other hand, are more likely to exaggerate the severity of Covid. When asked how often Covid patients had to be hospitalized, a very large share of Democratic voters said that at least 20 percent did. The actual hospitalization rate is about 1 percent.

only 0.04 percent of Covid deaths.

It’s true that some of these misperceptions reflect the fact that most people are not epidemiologists and that estimating medical statistics is difficult. Still, the errors do have a connection to real-world behavior, Rothwell told me.

the damage being done to children, in lost learning, lost social connections and, in the case of poorer children, missed meals.

The reasons for these ideological biases aren’t completely clear, but they are not shocking. Conservatives tend to be more hostile to behavior restrictions and to scientific research. And liberals sometimes overreact to social problems. (A classic example was the overpopulation scare of the 1960s and ’70s, when people on the left wrongly predicted that the world would run out of food.)

Covid, of course, represents a real crisis, one that has already killed more than a half-million Americans and continues to kill more than 1,000 per day. As in the case of many crises, underreaction has been the bigger problem with Covid — but it has not been the only problem.

Perhaps the best news from the Gallup survey was that some people were willing to revisit their beliefs when given new information. Republicans took the pandemic more seriously after being told that the number of new cases was rising, and Democrats were more favorable to in-person schooling after hearing that the American Academy of Pediatrics supports it.

She returned it last month.

Their article visualizes these changes, charting the structure of pop hits from Billie Holiday to Billie Eilish.

Part of the reason for the move toward less predictability: With the rise of social media platforms and music streaming services like Spotify, songs now have more competition for people’s attention. Many artists want to get to “the hook” of a song faster, delivering a variety of catchy sections — rather than one repeating chorus — to keep people listening.

become shorter, in part because people can easily skip around. The average No. 1 hit now clocks in at just over three minutes, down nearly a full minute from the early 2000s. The new brevity is something of a return to the early days of rock ’n’ roll.

Make saag paneer, an Indian dish with spinach (or other dark greens) and spices. And check out the most popular recipes on NYT Cooking’s Instagram account.

In Brontez Purnell’s new book, “100 Boyfriends,” a rotating cast of narrators shares stories of desire and heartbreak. The critic Parul Sehgal calls it a “hurricane.”

The hosts got serious about the shootings in Atlanta. 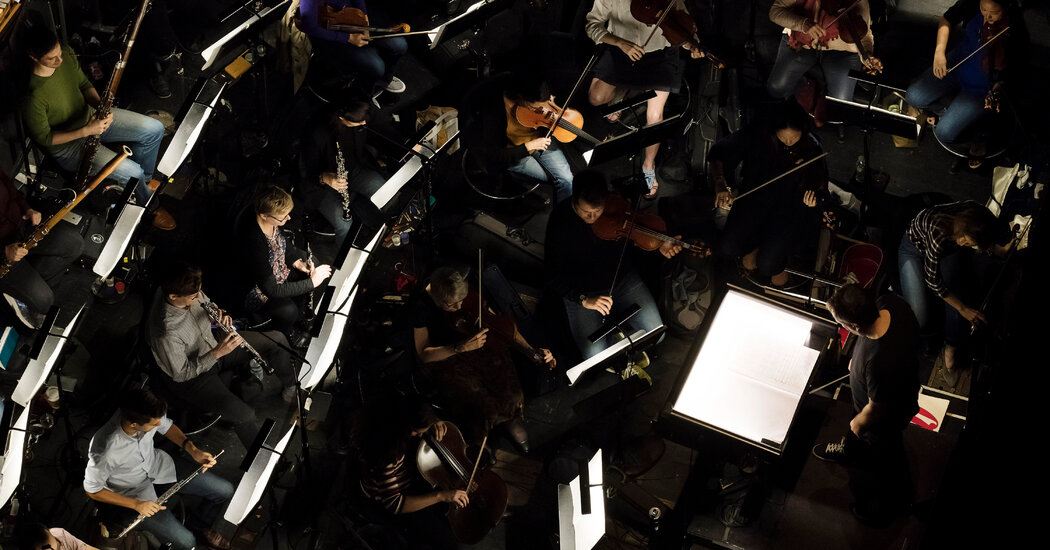 The musicians of the Metropolitan Opera orchestra have voted to accept a deal that will provide them with paychecks for the first time in nearly a year in exchange for returning to the bargaining table, where the company is seeking lasting pay cuts that it says are needed to survive the pandemic.

The musicians, and most of the Met’s workers, were furloughed in April, shortly after the pandemic forced the opera house to close. Months later, the Met offered the musicians partial pay in exchange for significant long-term cuts, but their union objected. Then the Met softened its position: Since the end of December, it has been offering to pay the musicians up to $1,543 a week on a temporary basis if they agreed to start negotiations. While the union representing the chorus agreed to the deal more than a month ago, the orchestra’s union took longer to accept the deal.

On Tuesday, the musicians in the orchestra, which became the last major ensemble in the United States without a deal to receive pandemic pay, agreed to take the offer, according to an email sent by the Met orchestra committee to its members.

“We’re very pleased that our agreement with the orchestra has been ratified and that they will begin receiving bridge pay this week,” the Met said in a statement, “along with the start of meaningful discussions towards reaching a new agreement.”

which it says has cost the company $150 million in earned revenues. For its highest-paid unions, the company is seeking 30 percent cuts — the change in take-home pay would be approximately 20 percent, it said — with a promise to restore half when ticket revenues and core donations return to prepandemic levels.

Under the deal, musicians will receive up to $1,543 for eight weeks; money they get from unemployment or stimulus payments is deducted from that total. If, after eight weeks, the musicians and the Met have not reached an agreement but the negotiations are productive, the partial paychecks will be extended, according to an email from the Met to the orchestra explaining the offer. The musicians’ labor contract expires at the end of July.

The Met offered the same deal to its choristers, dancers, stage managers and other employees who are represented by a different union, the American Guild of Musical Artists. That union accepted the deal at the end of January, and its members have been receiving paychecks for roughly five weeks.

The opera company is hopeful that it can start performing for the public in the fall, but opening night will be determined by where the virus and vaccination rates stand, as well as the outcome of the Met’s labor disputes. The company locked out its stagehands in December after their union rejected a proposal for substantial pay cuts.

In a note to Met employees sent on Friday, one year after the Met shut its doors, the company’s general manger, Peter Gelb, wrote that there was a “light at the end of the tunnel” because of the accelerated pace of vaccinations that President Biden had announced. Still, Mr. Gelb wrote, the Met needed to “come to terms with the economic necessities” that the pandemic has demanded.

“Even before the pandemic, the economics of the Met were extremely challenging and in need of a reset,” Mr. Gelb wrote. “With the pandemic, we have had to fight for our economic survival.”

Back in the 1970s, as The New York Times lagged behind other papers in hiring reporters and editors of color, Paul Delaney, the first Black reporter … END_OF_DOCUMENT_TOKEN_TO_BE_REPLACED

Managing MotherhoodOne of my responsibilities is managing a team in another state. That department is used to a lot of freedom. I’ve implemented … END_OF_DOCUMENT_TOKEN_TO_BE_REPLACED