Ministry of Public Security of the People's Republic of China 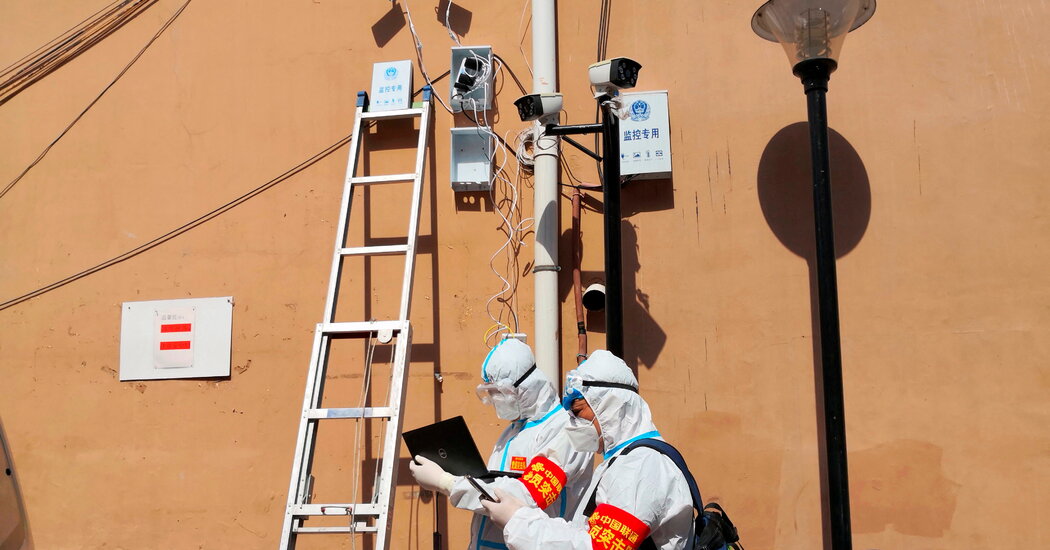 The more than 1.4 billion people living in China are constantly watched. They are recorded by police cameras that are everywhere, on street corners and subway ceilings, in hotel lobbies and apartment buildings. Their phones are tracked, their purchases are monitored, and their online chats are censored.

Now, even their future is under surveillance.

The latest generation of technology digs through the vast amounts of data collected on their daily activities to find patterns and aberrations, promising to predict crimes or protests before they happen. They target potential troublemakers in the eyes of the Chinese government — not only those with a criminal past but also vulnerable groups, including ethnic minorities, migrant workers and those with a history of mental illness.

They can warn the police if a victim of a fraud tries to travel to Beijing to petition the government for payment or a drug user makes too many calls to the same number. They can signal officers each time a person with a history of mental illness gets near a school.

to quell ethnic unrest in the western region of Xinjiang and enforce some of the world’s most severe coronavirus lockdowns. The space for dissent, always limited, is rapidly disappearing.

ChinaFile, an online magazine published by the Asia Society, which has systematically gathered years of records on government websites. Another set, describing software bought by the authorities in the port city of Tianjin to stop petitioners from going to neighboring Beijing, was provided by IPVM, a surveillance industry publication.

China’s Ministry of Public Security did not respond to requests for comment faxed to its headquarters in Beijing and six local departments across the country.

The new approach to surveillance is partly based on data-driven policing software from the United States and Europe, technology that rights groups say has encoded racism into decisions like which neighborhoods are most heavily policed and which prisoners get parole. China takes it to the extreme, tapping nationwide reservoirs of data that allow the police to operate with opacity and impunity.

Megvii, an artificial intelligence start-up, told Chinese state media that the surveillance system could give the police a search engine for crime, analyzing huge amounts of video footage to intuit patterns and warn the authorities about suspicious behavior. He explained that if cameras detected a person spending too much time at a train station, the system could flag a possible pickpocket.

Hikvision, that aims to predict protests. The system collects data on legions of Chinese petitioners, a general term in China that describes people who try to file complaints about local officials with higher authorities.

It then scores petitioners on the likelihood that they will travel to Beijing. In the future, the data will be used to train machine-learning models, according to a procurement document.

Local officials want to prevent such trips to avoid political embarrassment or exposure of wrongdoing. And the central government doesn’t want groups of disgruntled citizens gathering in the capital.

A Hikvision representative declined to comment on the system.

Under Mr. Xi, official efforts to control petitioners have grown increasingly invasive. Zekun Wang, a 32-year-old member of a group that for years sought redress over a real estate fraud, said the authorities in 2017 had intercepted fellow petitioners in Shanghai before they could even buy tickets to Beijing. He suspected that the authorities were watching their communications on the social media app WeChat.

The Hikvision system in Tianjin, which is run in cooperation with the police in nearby Beijing and Hebei Province, is more sophisticated.

The platform analyzes individuals’ likelihood to petition based on their social and family relationships, past trips and personal situations, according to the procurement document. It helps the police create a profile of each, with fields for officers to describe the temperament of the protester, including “paranoid,” “meticulous” and “short tempered.”

Many people who petition do so over government mishandling of a tragic accident or neglect in the case — all of which goes into the algorithm. “Increase a person’s early-warning risk level if they have low social status or went through a major tragedy,” reads the procurement document.

When the police in Zhouning, a rural county in Fujian Province, bought a new set of 439 cameras in 2018, they listed coordinates where each would go. Some hung above intersections and others near schools, according to a procurement document.

Nine were installed outside the homes of people with something in common: mental illness.

While some software tries to use data to uncover new threats, a more common type is based on the preconceived notions of the police. In over a hundred procurement documents reviewed by The Times, the surveillance targeted blacklists of “key persons.”

These people, according to some of the procurement documents, included those with mental illness, convicted criminals, fugitives, drug users, petitioners, suspected terrorists, political agitators and threats to social stability. Other systems targeted migrant workers, idle youths (teenagers without school or a job), ethnic minorities, foreigners and those infected with H.I.V.

The authorities decide who goes on the lists, and there is often no process to notify people when they do. Once individuals are in a database, they are rarely removed, said experts, who worried that the new technologies reinforce disparities within China, imposing surveillance on the least fortunate parts of its population.

In many cases the software goes further than simply targeting a population, allowing the authorities to set up digital tripwires that indicate a possible threat. In one Megvii presentation detailing a rival product by Yitu, the system’s interface allowed the police to devise their own early warnings.

With a simple fill-in-the-blank menu, the police can base alarms on specific parameters, including where a blacklisted person appears, when the person moves around, whether he or she meets with other blacklisted people and the frequency of certain activities. The police could set the system to send a warning each time two people with a history of drug use check into the same hotel or when four people with a history of protest enter the same park.

Yitu did not respond to emailed requests for comment.

In 2020 in the city of Nanning, the police bought software that could look for “more than three key people checking into the same or nearby hotels” and “a drug user calling a new out-of-town number frequently,” according to a bidding document. In Yangshuo, a tourist town famous for its otherworldly karst mountains, the authorities bought a system to alert them if a foreigner without a work permit spent too much time hanging around foreign-language schools or bars, an apparent effort to catch people overstaying their visas or working illegally.

In Shanghai, one party-run publication described how the authorities used software to identify those who exceeded normal water and electricity use. The system would send a “digital whistle” to the police when it found suspicious consumption patterns.

The tactic was likely designed to detect migrant workers, who often live together in close quarters to save money. In some places, the police consider them an elusive, and often impoverished, group who can bring crime into communities.

The automated alerts don’t result in the same level of police response. Often, the police give priority to warnings that point to political problems, like protests or other threats to social stability, said Suzanne E. Scoggins, a professor at Clark University who studies China’s policing.

At times, the police have stated outright the need to profile people. “Through the application of big data, we paint a picture of people and give them labels with different attributes,” Li Wei, a researcher at China’s national police university, said in a 2016 speech. “For those who receive one or more types of labels, we infer their identities and behavior, and then carry out targeted pre-emptive security measures.”

Mr. Zhang first started petitioning the government for compensation over the torture of his family during the Cultural Revolution. He has since petitioned over what he says is police targeting of his family.

As China has built out its techno-authoritarian tools, he has had to use spy movie tactics to circumvent surveillance that, he said, has become “high tech and Nazified.”

When he traveled to Beijing in January from his village in Shandong Province, he turned off his phone and paid for transportation in cash to minimize his digital footprint. He bought train tickets to the wrong destination to foil police tracking. He hired private drivers to get around checkpoints where his identification card would set off an alarm.

The system in Tianjin has a special feature for people like him who have “a certain awareness of anti-reconnaissance” and regularly change vehicles to evade detection, according to the police procurement document.

Whether or not he triggered the system, Mr. Zhang has noticed a change. Whenever he turns off his phone, he said, officers show up at his house to check that he hasn’t left on a new trip to Beijing.

Even if police systems cannot accurately predict behavior, the authorities may consider them successful because of the threat, said Noam Yuchtman, an economics professor at the London School of Economics who has studied the impact of surveillance in China.

“In a context where there isn’t real political accountability,” having a surveillance system that frequently sends police officers “can work pretty well” at discouraging unrest, he said.

Once the metrics are set and the warnings are triggered, police officers have little flexibility, centralizing control. They are evaluated for their responsiveness to automated alarms and effectiveness at preventing protests, according to experts and public police reports.

The technology has encoded power imbalances. Some bidding documents refer to a “red list” of people whom the surveillance system must ignore.

One national procurement document said the function was for “people who need privacy protection or V.I.P. protection.” Another, from Guangdong Province, got more specific, stipulating that the red list was for government officials.

Mr. Zhang expressed frustration at the ways technology had cut off those in political power from regular people.

“The authorities do not seriously solve problems but do whatever it takes to silence the people who raise the problems,” he said. “This is a big step backward for society.”

Mr. Zhang said that he still believed in the power of technology to do good, but that in the wrong hands it could be a “scourge and a shackle.”

“In the past if you left your home and took to the countryside, all roads led to Beijing,” he said. “Now, the entire country is a net.”

ROSWELL, Ga.--(BUSINESS WIRE)--Berkshire Hathaway HomeServices Georgia Properties, one of the largest and most successful real estate organizations in … END_OF_DOCUMENT_TOKEN_TO_BE_REPLACED

The real estate market seems to have a split personality.On the positive side for homebuyers, the number of properties for sale shot up by a … END_OF_DOCUMENT_TOKEN_TO_BE_REPLACED

Kim Tae-Ri plays a gun-toting time traveler in 'Alienoid.' Well Go USA Director Choi Dong-hoon likes a challenge. That much is apparent in his latest … END_OF_DOCUMENT_TOKEN_TO_BE_REPLACED