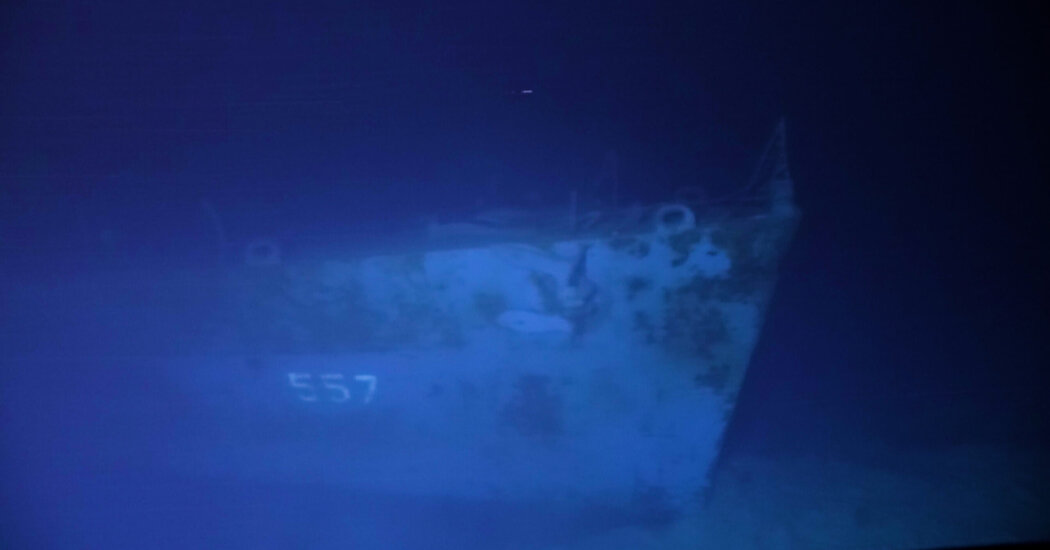 The two-person submersible piloted by Mr. Vescovo “has no operating depth limitation,” allowing it to go farther than the vehicle used in 2019, according to Caladan Oceanic.

The others on the mission were Parks Stephenson, a retired lieutenant commander with the U.S. Navy; and Shane Eigler, a senior submarine technician.

Last month, Mr. Vescovo and his team came up empty-handed on two dives. But on a third attempt, something new emerged: “the very sharp pointy end of the bow of the ship,” Mr. Vescovo said during a telephone interview this week from his home in Dallas. “We were just stunned at how intact it was.”

Mr. Vescovo, who was with Mr. Eigler on the dive, slowly steered his submersible to the side of the ship, and, “There it was, bright white numbers, on the hull: 557,” he said. “I turned to my co-pilot, because I was very busy piloting the sub and making sure that we were safe, and I said, ‘Get a picture! Get a picture!’”

It was, he later wrote on Twitter, “an extremely intense experience.”

On their fourth dive, they took more pictures and video, which showed two five-inch gun turrets, twin torpedo racks and several gun mounts on the ship. And, of course, the giant 557. “Imagery from the site clearly shows the ship’s hull number 557 confirming the identity of the wreck,” the Naval History and Heritage Command said in a statement on April 1.

The trip to the wreckage of the Johnston was not Mr. Vescovo’s first headline-making dive. In 2019, he declared that he had made the deepest-ever dive by a human being, after piloting a submersible into Challenger Deep, a spot nearly seven miles down in a long fissure in the western Pacific.

(That claim was disputed by James Cameron, the Hollywood director of “The Abyss” and “Titanic,” who is also a diving devotee and explored the Challenger Deep during a 2012 expedition.)

GREENVILLE, N.C.--(BUSINESS WIRE)--Employers aiming to win the war on talent have a new “A” team to tap into: college and professional athletes. … END_OF_DOCUMENT_TOKEN_TO_BE_REPLACED

Mortgage rates are likely to rise in July, extending a seven-month streak. High inflation, and the Federal Reserve's efforts to control it, have … END_OF_DOCUMENT_TOKEN_TO_BE_REPLACED