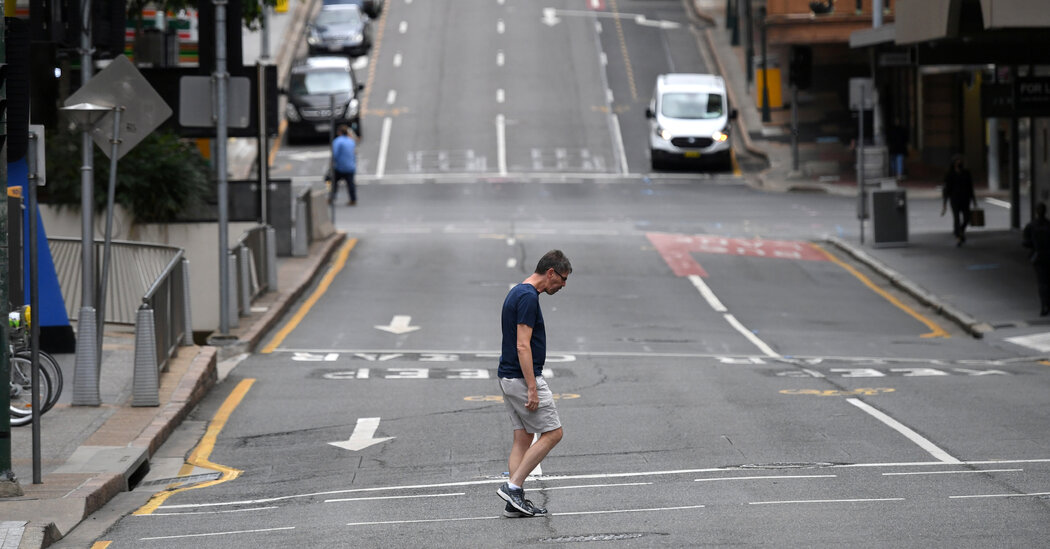 I’m in Sydney for the week and was planning to stay until Sunday. But after the discovery of a mystery coronavirus case in the community, I’m trying to work out whether I need to head back to Melbourne sooner to get ahead of a possible border closure.

It’s not a life-or-death decision, but I’m loath to give up the weekend I was supposed to spend with my parents (the guilt trip I’ll get for missing Mother’s Day will be subtle but significant). However, I’ve got work commitments in Melbourne next week that I can’t miss.

There are no clear metrics for when and how states decide to enforce border restrictions. As the authorities keep stressing, every outbreak is assessed on a case-by-case basis.

I do the calculations in my head: New South Wales recorded no new infections on Friday. Queensland and Western Australia have only enacted border measures for New South Wales travelers who’ve visited hot spots. All of the mystery case’s close contacts have tested negative, sans one.

But on the other hand, the list of exposure sites keeps growing. We still haven’t found the missing link between the infected man and the originating case in hotel quarantine. New Zealand has paused the trans-Tasman bubble with New South Wales for 48 hours.

If there’s an announcement, will I have enough time to book a flight? Will there still be flights left to book?

It adds up to a whole lot of uncertainty. And following closely on its heels, annoyance.

This is a regular occurrence by now. The coronavirus escapes hotel quarantine, the state locks down or puts restrictions in place, and other states enforce border restrictions. Travelers scramble, and businesses bemoan the hit to their profits.

There are some differences this time. Unlike the Perth outbreak two weeks ago, most states haven’t enacted hard border closures with New South Wales. But for the most part, it feels like we’re having the same conversations again and again without gaining much ground. How do we stop coronavirus from leaking out of hotel quarantine? Is the virus airborne? Do we need purpose-built facilities? Are state borders closures an overreaction?

These outbreaks should be getting less significant as more Australians get vaccinated. But that is also a slow and ungainly process, according to experts, in part because we’ve gotten complacent. We’ve dealt so well with the virus that there’s no urgency about inoculating the population.

Some people I’ve spoken to who became eligible for the vaccine this week as part of phase 2A have expressed exactly that sentiment: We might as well wait a bit longer, just in case. It won’t make a big difference to us, here, either way.

Some days, it feels like the pandemic, at least in Australia, is a thing of the past. In Melbourne, I’d noticed more and more people forgoing their mandated masks on public transport. Even I’ve been getting slack about checking in at venues. But the past few days have been another reminder that things we used to take for granted, like free movement between states, still aren’t guaranteed.

Now for this week’s stories: 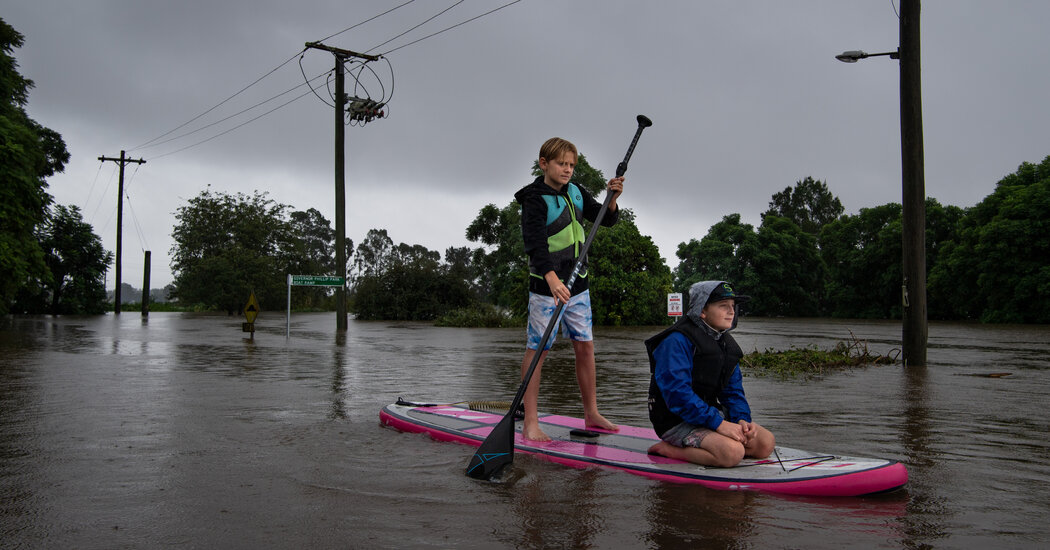 WINDSOR, Australia — Kelly Miller stood in her doorway on Monday, watching the water rise to within a few inches of the century-old home where she runs an alternative medicine business. The bridge nearby had already gone under in some of Australia’s worst flooding in decades, along with an abandoned car in the parking lot.

Two massive storms have converged over eastern Australia, dumping more than three feet of rain in just five days. In a country that suffered the worst wildfires in its recorded history just a year ago, the deluge has become another record-breaker — a once-in-50-years event, or possibly 100, depending on the rain that’s expected to continue through Tuesday night.

Nearly 20,000 Australians have been forced to evacuate, and more than 150 schools have been closed. The storms have swept away the home of a couple on their wedding day, prompted at least 500 rescues and drowned roads from Sydney up into the state of Queensland 500 miles north.

Shane Fitzsimmons, the resilience commissioner for New South Wales — a new state position formed after last year’s fires — described the event as another compounding disaster. Last year, huge fires combined into history-making infernos that scorched an area larger than many European countries. This year, thunderstorms have fused and hovered, delivering enough water to push rivers like the Hawkesbury to their highest levels since the 1960s.

Scientists note that both forms of catastrophe represent Australia’s new normal. The country is one of many seeing a pattern of intensification — more extreme hot days and heat waves, as well as more extreme rainfalls over short periods.

It’s all tied to a warming earth, caused by greenhouse gases. Because global temperatures have risen 1.1 degrees Celsius, or about 2 degrees Fahrenheit, over preindustrial levels, landscapes dry out more quickly, producing severe droughts, even as more water vapor rises into the atmosphere, increasing the likelihood of extreme downpours.

“There is a very strong link between global warming and that intensification in rainfall,” said Andy Pitman, director of the ARC Center of Excellence for Climate Extremes at the University of New South Wales. “There’s good scientific evidence to say extreme rain is becoming more extreme due to global warming.”

Australia’s conservative government — heavily resistant to aggressive action on climate change that might threaten the country’s fossil fuel industry — has yet to make that link.

Prime Minister Scott Morrison has offered funds for those forced to flee, and several dozen areas have already been declared disaster zones.

“It’s another testing time for our country,” he told a Sydney radio station, 2GB, on Monday.

Windsor may become one of the places hardest hit. Over the weekend, the Hawkesbury rose rapidly by more than 30 feet, and it is expected to peak in the next day or so at 42 feet.

With rain continuing to fall, emergency workers wearing bright orange went door to door on side streets with waist-deep puddles where the road dipped.

In and around the historic downtown, many of the businesses close to the river stayed shut on Monday, with a few putting sandbags by their doors. The central meeting place seemed to be at the foot of the Windsor Bridge, where television crews and crowds in rubber boots marveled at the view.

The new Windsor Bridge, which opened just a few months ago as a “flood-proof” replacement for an older bridge, was completely underwater.

It was built 10 feet higher than the bridge it replaced, but the river flowed over it as if it did not exist. A red flashing light on the top of a buried yellow excavator offered the only hint of the old bridge, or what had once been solid ground.

Cameron Gooch, 46, a diesel mechanic from a town nearby, said he saw huge trees speeding downriver toward the coast a day earlier. The water seemed to have slowed down, he said, becoming a giant bathtub with water held in place and rising slowly from tributaries.

“That’s the problem,” he said. “It’s just going to keep building up.”

A few feet away, Rebecca Turnbull, the curator of Howe House, a home and museum built in 1820, put handwritten notes on the furniture that would need to be removed if the water surged a few more feet.

She pointed to a line drawn on the doorway of a room that smelled of damp old wood.

Like many others in Windsor, she said she doubted the river would reach quite that high this time around. But that didn’t bring much solace to those closer to the rising brown sludge.

Rachael Goldsworthy, who owns a home and real estate business just behind Ms. Miller’s naturopathic clinic — it’s a few feet higher on the hillside — said she saw a new Mercedes washed downstream the night before after a man had parked in a small puddle and then went into a grocery store to buy a roast chicken. In just minutes, the rising water carried the car away.

On Monday, she tried to help Ms. Miller find a few milk crates — the only defense for some of the heavy furniture that could not be moved out.

Inside, Ms. Miller and her son collected oils and other products that she would normally be selling, with plans to put them in a truck or a storage unit. The antique flowered carpet was still dry, and she’d taped up the toilets to keep the septic system from backing up into the house.

She said she didn’t have flood insurance because she couldn’t afford it. So all she could do was learn from YouTube videos about how to fight a flood.

“We’re trying to work out how to save what we can,” she said. “We don’t want to lose everything.”

Asbestos in the home can be downright scary. This extremely dangerous material has been linked to all kinds of health problems, including … END_OF_DOCUMENT_TOKEN_TO_BE_REPLACED

ATLANTA — Before the three men convicted of murdering Ahmaud Arbery were sentenced on Monday on federal hate crime charges, they asked a judge to … END_OF_DOCUMENT_TOKEN_TO_BE_REPLACED