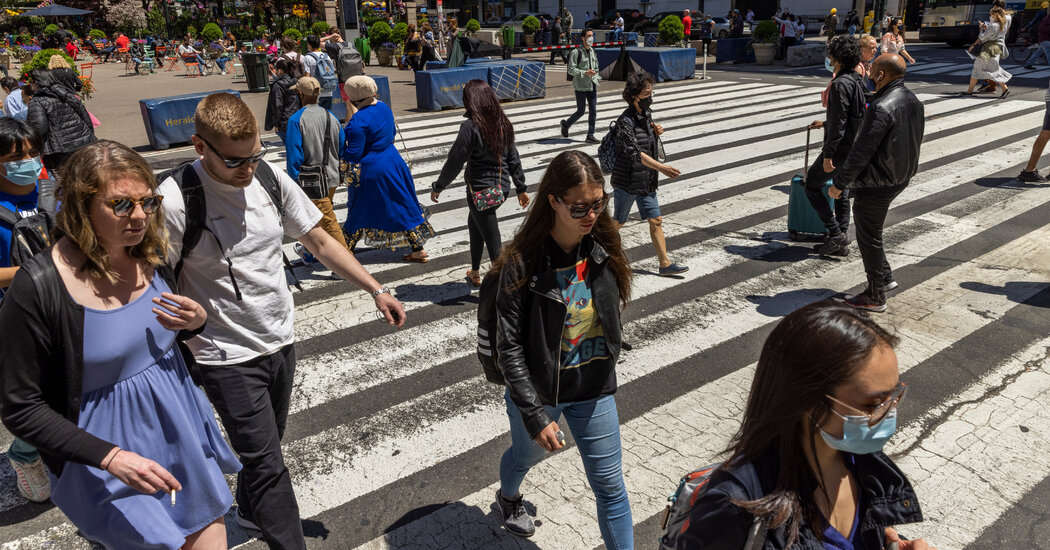 The governor of New York said Monday that the state will lift some mask requirements in accordance with the new mask guidance for vaccinated people that the Centers for Disease Control and Prevention announced Thursday.

“No masks, no social distancing,” Gov. Andrew M. Cuomo, a Democrat, said of the policy that will go into effect for vaccinated people on Wednesday. Masks will still be required in nursing homes, schools, health care facilities and on public transit. Unvaccinated people should continue to wear a mask, he said in a news conference at Radio City Music Hall in Midtown Manhattan.

The move dovetails with the previously scheduled lifting of most capacity restrictions at offices, museums, restaurants and stores on Wednesday. It was significant, however, given the longstanding restrictions imposed on one of the hardest hit cities in the United States.

In addition, the city’s subway system returned to 24-hour service on Monday. There has been more than one year of overnight closings during the coronavirus pandemic to provide more time to clean and disinfect trains, stations and equipment. It was the longest planned shutdown since the subway opened in 1904.

no longer necessary for fully vaccinated people to mask or maintain social distance in many settings. The change set off public confusion and drew objections from some local officials and labor unions, including the country’s largest union of registered nurses. A number of major U.S. retailers have already lifted mask requirements, essentially turning to an honor system that relies on unvaccinated people to keep their masks on in public.

Businesses in New York can still set individual policies and some will still require masks.

Early last year, as international lockdowns upended daily life, they took with them, one by one, many of the major cultural and sporting events that dot the calendar each year. The N.B.A. suspended its season, the French Open was postponed for several months and the Tokyo Olympics were delayed a year. The future of the Glastonbury Festival and the Coachella Valley Music and Arts Festival were in doubt. It was a bleak time.

Recently, as conditions in many places around the world have slowly begun to improve, and as countries have begun mass vaccination campaigns, some events and cultural staples have made plans to return, albeit with modifications. While few events, if any, have plans to go ahead free of restrictions this year, some are taking a hybrid approach. Others remain postponed or canceled.

Here’s the status of some of the major events around the world.

scheduled to begin on July 23 with an opening ceremony. The bulk of the athletic events will begin the next day. The first round of Wimbledon begins on June 28 and will run through mid-July. Officials said they were working toward a spectator capacity of at least 25 percent.

The 105th Indianapolis 500 will go on as planned on May 30. Officials will allow about 135,000 spectators in — 40 percent of the venue’s capacity. The event was organized with state and local health officials and was approved by the Marion County Public Health Department, race officials said.

The French Open, one of the premier tennis competitions, has been postponed one week to a new start date of May 24. The decision was made in agreement with the authorities in France and the governing bodies of international tennis, said officials, who want the tournament played in front of the largest possible number of fans.

is canceled again this year.

it would not take place this summer.

The Essence Festival of Culture, which usually draws more than a half million people to New Orleans over the Fourth of July weekend every year, will host a hybrid experience this year over two weekends: June 25-27 and July 2-4.

Headliners like Billie Eilish, Post Malone and ASAP Rocky will take the stage at the Governors Ball Music Festival, which is scheduled for Sept. 24-26 at Citi Field in Queens. Organizers say the event will return to its typical June dates in 2022.

Burning Man, the annual countercultural arts event that typically draws tens of thousands of people to Black Rock Desert in Nevada, has been canceled again this year because of the pandemic. It will return in 2022, organizers said.

After being canceled last year, the Austin City Limits Music Festival, the event in the capital of Texas, is scheduled to return to Zilker Park on Oct. 1-3 and Oct. 8-10.

NYC Pride 2021 will move forward in June with virtual and in-person events. The Pride March, which was canceled last year, will be virtual this time. (San Francisco Pride, also in June, is planning similar adjustments, while Atlanta Pride is planning to hold an in-person event in October.)

from Aug. 10. In order to keep concertgoers safe, organizers said events will not have intermissions and its venue will have a limited number of available seats. Similarly, the Salzburg Festival in Austria kicks off in mid July with modifications.

The Edinburgh International Festival, a showcase for world theater, dance and music in the Scottish city since 1947, will run Aug. 7-29. Performances will take place in temporary outdoor pavilions with covered stages and socially distanced seating.

E3, one of the video game industry’s most popular conventions where developers showcase the latest news and games, will be virtual this year from June 12-15.

The New York International Auto Show, which showcases the newest and latest automobiles from dozens of brands, will run Aug. 20-29. The event last year was postponed and eventually canceled because of the pandemic.

The Cannes Film Festival in the South of France, one of the movie industry’s most revered and celebrated events, has been postponed to July 6-17 from mid-May. The 2021 edition of the event, which was canceled last year, is currently scheduled to be in person.

After more than a year of no theater performances, Broadway shows will start selling tickets for full-capacity shows with some performances starting on Sept. 14. (Some West End shows will resume as early as May 17.)

After being virtual last year, New York Comic-Con will return with a physical event Oct. 7-10 at the Jacob K. Javits Convention Center in Manhattan. The convention will run at reduced capacity to ensure social distancing, organizers said. This year’s Comic-Con International event, which is normally held in July in San Diego, has been postponed until summer 2022. There are plans for a smaller event called Comic-Con Special Edition however, that will be held in person in November.

ROSWELL, Ga.--(BUSINESS WIRE)--Berkshire Hathaway HomeServices Georgia Properties, one of the largest and most successful real estate organizations in … END_OF_DOCUMENT_TOKEN_TO_BE_REPLACED

The real estate market seems to have a split personality.On the positive side for homebuyers, the number of properties for sale shot up by a … END_OF_DOCUMENT_TOKEN_TO_BE_REPLACED

Kim Tae-Ri plays a gun-toting time traveler in 'Alienoid.' Well Go USA Director Choi Dong-hoon likes a challenge. That much is apparent in his latest … END_OF_DOCUMENT_TOKEN_TO_BE_REPLACED