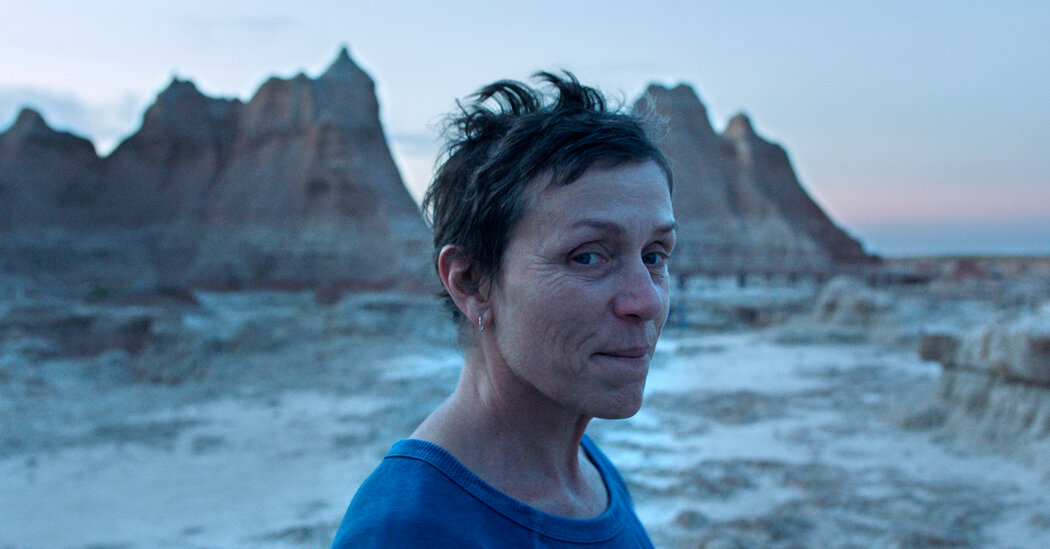 LONDON — “Nomadland,” Chloé Zhao’s drama about a middle-aged woman who travels across the United States in a van seeking itinerant work, scored the biggest number of high-profile nominations for this year’s EE British Academy Film Awards, Britain’s equivalent of the Oscars.

On Tuesday, the film, which stars Frances McDormand and won the Golden Globe for best drama in February, picked up seven nominations for the awards, commonly known as the BAFTAs.

It will compete for best film against “The Trial of the Chicago 7,” “Promising Young Woman,” “The Father” and “The Mauritanian.”

The best-film nominees are almost the same as the titles that competed for best drama at this year’s Golden Globes. (Only “Mank,” David Fincher’s revisiting of “Citizen Kane,” is missing, replaced by “The Mauritanian.”) But in the talent categories for this year’s BAFTAs, the nominees are more diverse than the Golden Globe lists. Many come from low-budget, independent films, such as “Rocks,” a British coming-of-age tale about a Black teenager in London, that also received seven nominations.

overhaul of BAFTA’s voting rules to increase the diversity of the nominees after recent criticism. Last year, no people of color were nominated in the BAFTAs’ main acting categories, and no women were nominated for best director. Those omissions prompted a social media furor and criticism from the stage at the award ceremony. “I think that we sent a very clear message to people of color that you’re not welcome here,” Joaquin Phoenix said when accepting the best-actor award for his performance in “Joker.”

BAFTA required all of its 6,700 voting members to undergo unconscious bias training before voting on this year’s nominees, as well as requiring them to watch a selection of 15 films to stretch the range of titles viewed. Among dozens of other changes to the voting procedures to increase the diversity of the nominees, they were selected for the first time from “longlists” prepared by BAFTA, with the input of specialist juries.

In contrast to the male-skewed nominee lists of previous years, four of the best-director nominees announced on Tuesday are women; four of the six nominees in both leading actor categories are people of color.

In the best-director category, for example, Chloé Zhao has been nominated for “Nomadland” and will compete against Lee Isaac Chung for “Minari”; Sarah Gavron for “Rocks”; Shannon Murphy for “Babyteeth”; Jasmila Zbanic for “Quo Vadis, Aida?” a retelling of a massacre in the Bosnian War of the 1990s; and Thomas Vinterberg for “Another Round,” a dark comedy about Danish attitudes to alcohol.

In the best-actress category, Frances McDormand, the star of “Nomadland,” will compete against Radha Blank for her role in “The Forty-Year-Old Version,” Wunmi Mosaku for the horror film “His House,” and Bukky Bakray, the teenage star of “Rocks.” That list includes fewer recognizable star names than previous years: Rosamund Pike and Andra Day, who won the main actress awards at this year’s Golden Globes, are missing.

not allowed in England until May 17 at the earliest.

The Academy of Motion Picture Arts and Sciences is scheduled next Monday to announce nominations for this year’s Oscars.

When Chloé Zhao won the Golden Globe for best director for her film “Nomadland” last Sunday, becoming the first Asian woman to receive that prize, Chinese state news outlets were jubilant. “The Pride of China!” read one headline, referring to Ms. Zhao, who was born in Beijing.

But the mood quickly shifted. Chinese online sleuths dug up a 2013 interview with an American film magazine in which Ms. Zhao criticized her native country, calling it a place “where there are lies everywhere.” And they zeroed in on another, more recent interview with an Australian website in which Ms. Zhao, who received much of her education in the United States and now lives there, was quoted as saying: “The U.S. is now my country, ultimately.”

The Australian site later added a note saying that it had misquoted Ms. Zhao, and that she had actually said “not my country.” But the damage was done.

Chinese nationalists pounced online. What was her nationality, they wanted to know. Was she Chinese or American? Why should China celebrate her success if she’s American?

increasingly complex political minefield that companies must navigate there.

only major gatekeeper for films in China, determining which foreign movies got the official stamp of approval and, ultimately, access to the country’s booming box office. Now, more and more, China’s online patriots can also influence the fate of a film or a company.

little pinks,” has become another crucial consideration for companies seeking to enter the Chinese market.

“There is much more space to punch figures like Chloé Zhao,” said Aynne Kokas, the author of “Hollywood Made in China.”

The backlash against “Nomadland” was somewhat unexpected. Aside from Ms. Zhao, the film, which stars Frances McDormand in a sensitive portrait of the lives of itinerant Americans, has little if any connection to China. Though it is said to be a strong contender for the Academy Awards, it was not expected to bring in big Chinese audiences, given its limited theatrical release and its slow pacing.

But the patriotic frenzy could become a significant issue for another film directed by Ms. Zhao, “The Eternals,” a big-budget superhero movie for Disney’s Marvel Studios starring Angelina Jolie, Kumail Nanjiani and Salma Hayek. It is scheduled to debut in the United States in November, but a China release date has not been publicly announced.

Experts say that while Ms. Zhao’s background would likely have been a major selling point for “The Eternals” in China, it could now become an Achilles’ heel — a potentially devastating blow for the film and for Marvel, which has reaped huge rewards in the Chinese market with movies like “Avengers: Endgame.”

Such a scenario would be especially damaging this year, with the pandemic having decimated box offices in almost all major markets but China, where the virus is largely under control and the domestic film industry is thriving.

previously reported by Variety. “As the world’s largest market, there is much less need to bring Hollywood studio films into the market.”

Until recently, few in China had heard of Ms. Zhao, 38.

Born in Beijing, she went to boarding school in London, to high school in California and ultimately to film school at New York University. Before “Nomadland,” Ms. Zhao gained recognition for the critically acclaimed art films “Songs My Brothers Taught Me” (2015) and “The Rider” (2017).

In China, though, she was best known as the stepdaughter of the popular comic actress Song Dandan, who in 1997 married Ms. Zhao’s father, the former head of a Chinese state-owned steel company.

Ms. Zhao has spoken about what she sees as her shifting identity, a product, she said, of years spent moving around the world. She has described her Chinese heritage as part of that identity.

In a recent profile in New York magazine, Ms. Zhao referred to northerners in China as “my own people” and described herself as being “from China.” Global Times, a Chinese state-backed nationalist tabloid, wrote on Twitter on Wednesday that Disney had said that Ms. Zhao was a Chinese national.

archived versions of the webpage. But by mid-February, the quote had been removed and a note added, saying that the article had been “edited and condensed after publication.” The quote is not in the latest version of the article, though it appears elsewhere on the magazine’s website.

Filmmaker Magazine did not immediately respond to a request for comment, nor did Disney. Ms. Zhao could not be reached for comment.

Amid the nationalist-tinged outcry, many Chinese rushed to defend Ms. Zhao and heap scorn on the “little pinks” for being overly sensitive. “Nomadland” was a beautiful movie, many said, one that rose above the ugliness of politics and national borders.

Nothing comparable to its unflinching portrayal of the struggles of gig workers and America’s fraying social safety net could have been made in China, others said. On Douban, a review website popular with relatively liberal-minded Chinese, the film has nearly 66,000 reviews and a strong rating of 8.4 out of 10.

Some commenters also pointed out the irony that Chinese nationalists would want to clamp down on a film that seemed to fit so well with the narrative that official propaganda organs had recently been touting, of a rising China and a United States in decline.

“Chloé Zhao’s ‘Nomadland’ deeply reveals the crisis of America’s lower-class citizens and the difficult lives of its people,” Qiao Mu, a former professor of communications at Beijing Foreign Studies University, wrote on Weibo. “This should strengthen our pride in socialism and our self-confidence in the Chinese way.”

“She is the pride of the Chinese people,” he added, “not someone who insults China.” 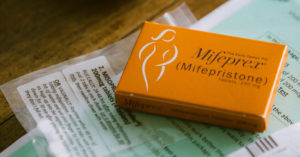 The Biden administration has decided to allow women to receive abortion pills by mail for the duration of the coronavirus pandemic, the latest … END_OF_DOCUMENT_TOKEN_TO_BE_REPLACED

President Biden’s climate envoy, John Kerry, was set to arrive in China on Wednesday, the first Biden administration official to visit the country at … END_OF_DOCUMENT_TOKEN_TO_BE_REPLACED