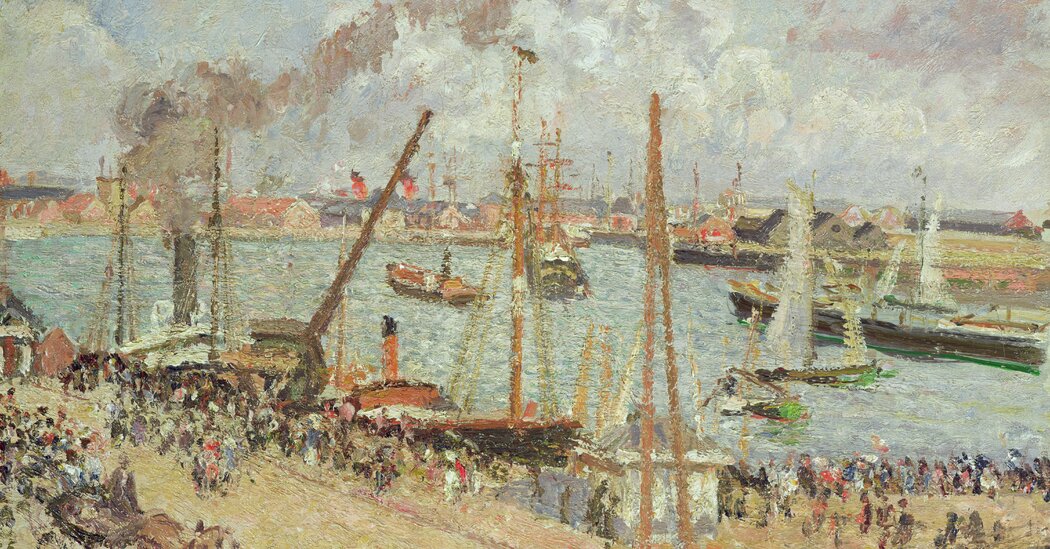 More than a dozen heirs of a Jewish couple who left Germany as Hitler rose to power have filed a lawsuit in Georgia seeking to recover a Pissarro painting said to have been part of an extensive collection of works seized by Nazis.

The painting, “The Anse des Pilotes, Le Havre,” an oil on canvas work depicting a harbor scene, was among works belonging to Margaret and Ludwig Kainer taken by Nazis after they left Germany, according to the lawsuit filed on Monday in Federal District Court in Atlanta.

Dated 1903, the year of Pissarro’s death, the painting has been valued at about $500,000 to $1 million. It is believed to now be in the possession of the Horowitz Family Foundation in Atlanta, or members of the Horowitz family there, the lawsuit said, naming as respondents the foundation and members of the family: Gerald D. Horowitz; his wife, Pearlann Horowitz; and their son, Scott Horowitz.

“The Nazis confiscated or misappropriated hundreds of thousands of pieces of art as part of their genocidal campaign against the Jewish people,” the suit says, adding, “The story continues today, with the Kainers’ heirs continuing to try and locate and demand their rightful property.”

lawsuit that the Kainer heirs filed, in State Supreme Court in New York in 2013, which described the foundation as “a sham” meant to cheat them out of their inheritance. Lawyers for UBS said years ago in court papers that the company has no relationship with the foundation. The foundation has maintained that, under the terms of Norbert Levy’s will, it has a legal right to the assets it has collected.

In 2017, a judge dismissed the case against the foundation and UBS, saying that the court system in New York was not the proper forum for the heirs’ claims, and an appellate court upheld the decision. Lawyers for the heirs are now challenging those rulings in the state’s Court of Appeals, arguing that the case should be decided in New York.

According to the lawsuit filed this week in Atlanta, Margaret and Ludwig Kainer left for Switzerland in 1932 to obtain medical care, but never returned to their home in Germany. Alarmed by the persecution of Jews there, they instead moved to France. Meanwhile, the lawsuit said, Nazis sold the stolen Pissarro at auction in 1935.

Eventually, the Kainers registered the work as looted with the French Department of Reparations and Restitutions, the plaintiffs said, adding that information about the painting, along with a photograph of it, was included in a directory of property looted in France and elsewhere during the war.

The painting’s path during the 60 years after the auction in Germany is uncertain. In 1995, the lawsuit said, Gerald D. Horowitz bought the painting from Achim Moeller Fine Art in New York.

the Mondex Corporation, an art recovery company representing the Kainer heirs, that the painting still existed.

The lawsuit added that lawyers for the Horowitzes refused the demand that the work be turned over and denied that the heirs had any right to it.

Now, the precise location of the painting remains a mystery to the heirs.

The lawsuit said that in the summer of 2015, representatives of the Kainer family had spoken briefly with Scott Horowitz.

“Mr. Horowitz was unwilling to confirm whether his father still possessed the painting,” the lawsuit stated, “and refused to disclose its whereabouts.”

KOROPY, Ukraine — Four men tugged at long strips of fabric to lift a coffin out of the gaping hole in the backyard of a small house. They flung the … END_OF_DOCUMENT_TOKEN_TO_BE_REPLACED

The lawsuits argue that state constitutions offer more protection for abortion than the federal constitution, either by quirk of state tradition or … END_OF_DOCUMENT_TOKEN_TO_BE_REPLACED