PANJSHIR, Afghanistan — In this lush strip of land — walled off from potential invaders by high mountain peaks and narrow, ambush-prone passes — former mujahedeen fighters and Afghan commandos regrouped in the days after the Taliban toppled the Afghan government, vowing to fight to the last man. With its history of resistance and its reputation for impenetrability, the Panjshir Valley seemed an ideal place for a determined force of renegades to base an insurgency.

By Sept. 6, however, the Taliban claimed to have captured the entire province of Panjshir, a momentous victory in a region that repelled numerous Soviet offensives in the 1980s, and had remained beyond the Taliban’s control during its rule from 1996 to 2001.

He said that Qari Qudratullah, the new provincial governor, was meeting with elders to discuss a peaceful handover.

Behind the Panjshiri fighters flew the green, white and black flag of the Northern Alliance, repurposed to signify the National Resistance Front, which is led by Ahmad Massoud, son of Ahmad Shad Massoud, the leader assassinated in 2001. But villagers said that the Taliban had long been active in the valley, and that their takeover had been negotiated by some of the residents.

Outside the tomb of the elder Massoud, a young Talib, far from his home in Helmand Province in the south, performed his evening prayers.

Days earlier, photos of the partially destroyed tomb, in a dramatic hilltop mausoleum overlooking the valley, appeared on social media alongside accusations that the Taliban had ransacked the place. “This wasn’t our work,” one of the Taliban guards said. “Civilians broke in and smashed the glass.”

The site had since been repaired by the Taliban and was now in its original state. A group of guards stood around the tomb, and as evening fell, they stretched a green shroud over it and closed the doors for the night.

Outside the valley, those who had fled wondered if they would ever be able to return.

When the Taliban first entered Panjshir, Sahar, 17, and her family barricaded themselves at home, thinking the resistance would eventually chase the Talibs away. But the fighting steadily drew closer.

Neighbors started to flee, said Sahar, whose last name is being withheld to protect her identity. Her uncle and cousin were stopped at a Taliban checkpoint near the village, she said, where they were beaten and ordered to turn over their weapons and the names of resistance fighters.

Last week, the family escaped through the mountains. They walked for five days, through remote valleys and over mountain ridges. Sahar fainted three times from dehydration, she said, and her mother had blisters and swollen feet. Her father, who is diabetic, nearly collapsed.

Eventually, they hitched a ride to Kabul, the country’s capital, where they had relatives with whom they are now living.

“We don’t know what will happen,” Sahar said by phone from Kabul. “We may never be able to get back.” 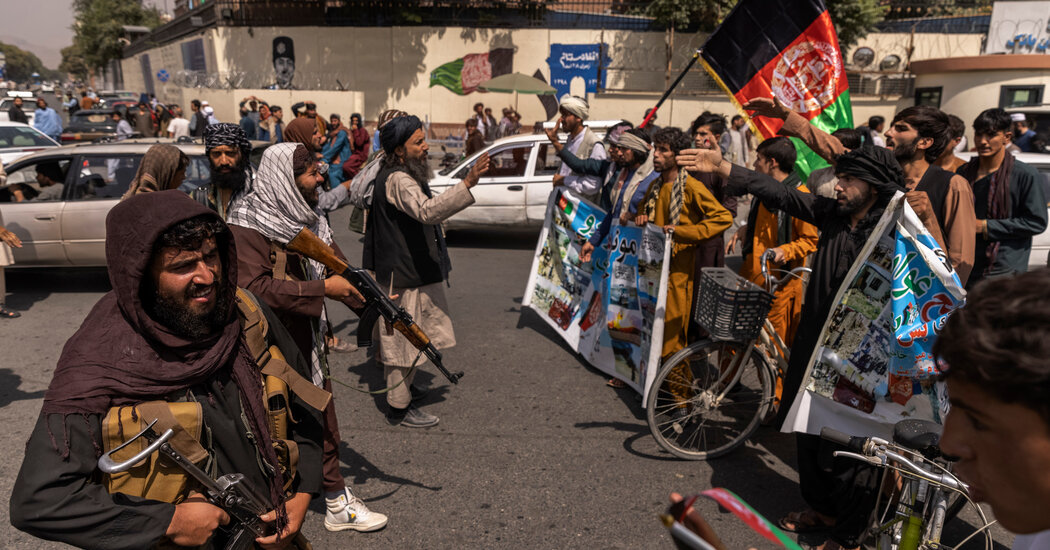 The Taliban cracked down on protests that erupted in at least four cities in Afghanistan on Thursday and rounded up opponents despite promises of amnesty, even as fearful workers stayed home and thousands of people continued a frenzied rush to leave the country.

Even as the Taliban moved to assert control, hundreds of protesters took to the streets for a second day to rally against their rule, this time marching in Kabul, the capital, as well as other cities. Again, the Taliban met them with force, using gunfire and beatings to disperse crowds. And again the actions of Taliban foot soldiers undermined the leadership’s suggestions that, having taken power, they would moderate the brutality they have long been known for.

The police officers who served the old government have melted away, and instead armed Taliban fighters are operating checkpoints and directing traffic, administering their notions of justice as they see fit, with little consistency from one to another.

according to witnesses and a security assessment prepared for the United Nations. Though the Taliban have said there would be no reprisals, there have been arrests, property seizures and scattered reports of reprisal killings.

city after city with remarkable speed once most U.S. forces had withdrawn, brushed aside the demoralized and disorganized Afghan security forces, and swept into Kabul on Sunday. Now they are learning that while conquest may have been swift, governing a vibrant, freethinking society is not so easy.

The anti-Taliban protests have been a remarkable display of defiance of a group that has a long history of controlling communities through fear and meeting dissent with lethal force. The protests also offered evidence that while tens of thousands are now seeking escape, some of those left behind would try — for now, at least — to have a voice in the country’s direction, despite the growing crackdown.

independence from Britain in 1919. It was not clear whether the victims had been shot or had died in a stampede.

There were even demonstrators waving the flag in Kandahar, the southern city that is considered the birthplace of the Taliban. In the southeastern city of Khost, the group imposed a curfew, a day after demonstrations and clashes there. The protests on Thursday in Kabul included one near the presidential palace, and another that drew about 200 people before the Taliban used force to break it up.

The events, led primarily by young men and women, were a wholly new experience for Taliban insurgents who have spent the last 20 years mostly in the mountains and rural districts of Afghanistan and Pakistan.

Islamic Emirate of Afghanistan — the same name they used a generation ago.

The tricolor flag flown by the collapsed government, taken down by the Taliban and replaced by their own banner, has become a repeated flash point, with people in multiple cities beaten for displaying it. On Wednesday, the Taliban fired on demonstrators waving the flag in the eastern city of Jalalabad, with reports of two or three people killed.

She added that after the Taliban spokesman’s first news briefing, held on Tuesday, when he insisted that the rights of the media and women would be respected, she had not expected much good to come.

“I had low expectations but now it has become clear that there is a gap between action and words,” Ms. Atakpal said.

Residents of Kabul were feeling their way under the new regime gingerly. The streets were quiet, largely empty of traffic, interrupted by occasional bursts of gunfire and the roar of American military planes patrolling and conducting the round-the-clock evacuation.

One woman complained that popular Turkish television serials were no longer airing, after cable companies closed down their services. The Taliban, which banned all television during their previous time in power, have since embraced media as a propaganda tool, and cable companies were already anticipating new rules on morally acceptable content in accordance with the militants’ strict interpretation of Islamic law.

Mr. Shesta said he was deleting photos from his cellphone of him meeting with the former president, Ashraf Ghani, and other government officials, many of whom have fled the country. Mr. Ghani left the capital on Sunday, and several of his senior officials traveled to Turkey on Monday.

At the Kabul airport, which is still controlled by U.S. troops, the Taliban are in charge outside its blast walls and used force and intimidation to control access, beating people back and firing their rifles.

Norwegian Center for Global Analyses, cited multiple reports that the Taliban had a list of people to question and punish, as well as their locations. Military and police personnel and people who worked for investigative units of the toppled government were particularly at risk, according to the document, which was dated Wednesday.

Already, the Taliban were going door to door and “arresting and/or threatening to kill or arrest family members of target individuals unless they surrender themselves to the Taliban,” said the document, which was seen by The New York Times.

It contained a reproduced letter dated Aug. 16 from the Taliban to an unnamed counterterrorism official in Afghanistan who had worked with U.S. and British officials and then gone into hiding.

The letter instructed the official to report to the Military and Intelligence Commission of the Islamic Emirate of Afghanistan in Kabul. If not, it warned, the official’s family members “will be treated based on Shariah law.”

SAN FRANCISCO — Cleve Jones has lived in the Castro neighborhood for nearly 50 years, almost from the day he graduated from high school in Phoenix and … END_OF_DOCUMENT_TOKEN_TO_BE_REPLACED

A home inspection can spare you from unpleasant surprises after you buy. After crunching the numbers, searching your favorite neighborhoods, and … END_OF_DOCUMENT_TOKEN_TO_BE_REPLACED