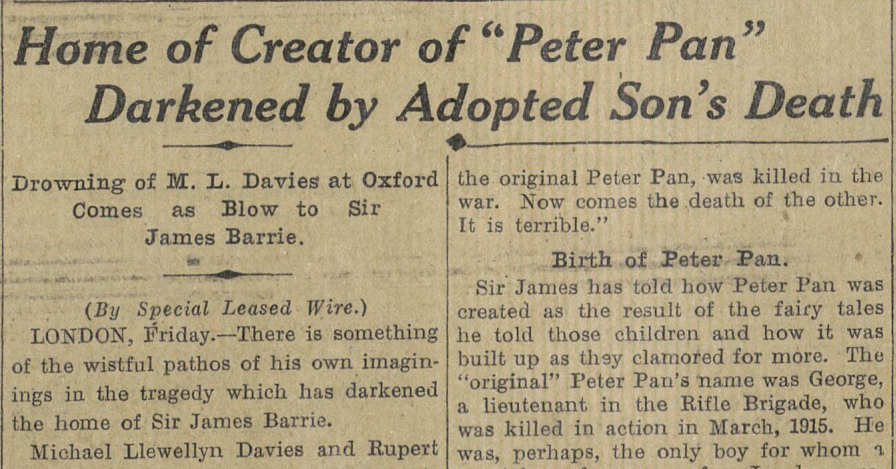 (By Special Leased Wire.) LONDON, Friday. — There is something of the wistful pathos of his own imaginings in the tragedy which has darkened the home of Sir James Barrie.

Michael Llewellyn Davies and Rupert Buxton, the younger son of the late Sir Thomas V. Buxton, were drowned near the Sanford bathing pool at Oxford yesterday. The two undergraduates were almost inseparable. Davies was twenty years of age, Buxton twenty-two.

It has been related how Sir James Barrie, seeing the Davies children in Kensington Gardens many years ago, stopped to play with them. When both their father and mother (who was the sister of Gerald du Maurier) died still young, Sir James adopted the children.

From his association with them sprang some of his most beautiful fantasies. Typically, however, of his shyness and reserved nature was the fact that not even his friends were able to say to-day how many of the children Sir James adopted.

“He is so retiring that he hardly ever spoke about it,” said one of his friends to-day. “I always had understood that he adopted two children, not four. The elder, who, of course, is believed to be the original Peter Pan, was killed in the war. Now comes the death of the other. It is terrible.”

Sir James has told how Peter Pan was created as the result of the fairy tales he told those children and how it was built up as they clamored for more. The “original” Peter Pan’s name was George, a lieutenant in the Rifle Brigade, who was killed in action in March, 1915. He was, perhaps, the only boy for whom a special performance of a London production has been given in his own home.

When “Peter Pan” was produced in London, the “original” was sick in bed at home. “If the boy cannot come to the play, we will take the play to the boy,” said the late Charles Frohman, in observing Sir James’ distress. And they did.

Now both boys, who are most closely associated with the fashioning of Peter Pan, are dead. One of Sir James’ friends to-day recalled the words of Peter himself. “To die would be an awfully big adventure.”

“Nobody can say what it will mean for Sir James,” declared an actress who is closely associated with the dramatist and his plays. “I knew all the adopted family — five altogether — all boys. The lad who just met such a tragic death was very brilliant. I do not know if it will interfere with the play we are now rehearsing under Sir James’ supervision.”

ROSWELL, Ga.--(BUSINESS WIRE)--Berkshire Hathaway HomeServices Georgia Properties, one of the largest and most successful real estate organizations in … END_OF_DOCUMENT_TOKEN_TO_BE_REPLACED

The real estate market seems to have a split personality.On the positive side for homebuyers, the number of properties for sale shot up by a … END_OF_DOCUMENT_TOKEN_TO_BE_REPLACED

Kim Tae-Ri plays a gun-toting time traveler in 'Alienoid.' Well Go USA Director Choi Dong-hoon likes a challenge. That much is apparent in his latest … END_OF_DOCUMENT_TOKEN_TO_BE_REPLACED