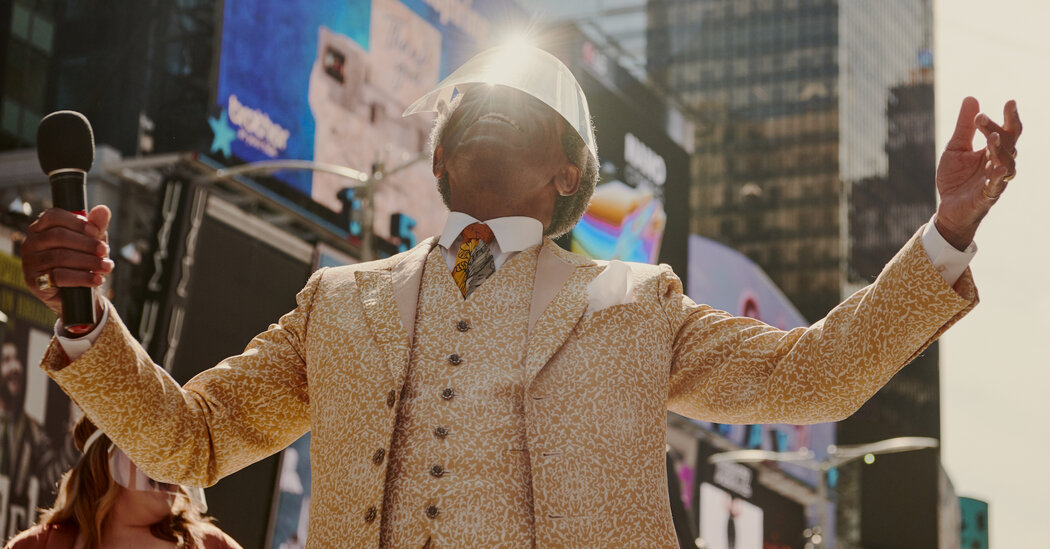 One year ago, the grim news that Broadway was shutting down was sweeping through the theater district. Performers were packing up their things and heading home; theater staff were stationed in lobbies to intercept ticket holders and explain to them that the show was canceled.

As a return date was pushed further and further, performers and theater staff resigned themselves to finding work elsewhere.

But on Friday, the anniversary of the day their beloved industry shut its doors, Broadway singers, dancers, actors and front-of-house staffers gathered in Times Square, just across from the TKTS discount ticket booth, to perform live for a small audience of industry insiders and passers-by.

President Biden asked states to make all adults eligible to be vaccinated by May 1, a hopeful sign that shows might be able to start rehearsals over the summer.

“Mean Girls” and “Frozen,” announced that they would not be returning to Broadway, as well as two plays that were in previews, Martin McDonagh’s “Hangmen” and a revival of Edward Albee’s “Who’s Afraid of Virginia Woolf?” On Friday, several shows promised that they would indeed be back, including “Mrs. Doubtfire,” which got through three performances before it was forced to close, and “Six,” which had been scheduled to open on March 12, 2020.

That day, Judi Wilfore, the house manager for the Imperial Theater, remembers standing in the lobby before the scheduled evening performance of “Ain’t Too Proud” and breaking the news to ticketholders. Even though Broadway shut down on a Thursday, Wilfore came to work that weekend, too, in case any audience members showed up.

Over the summer, Wilfore decided that she needed to find work elsewhere, so she took an online course at Health Education Services, to get certified as a Covid compliance officer. At Friday’s event in Times Square, it was her job to make sure people were following safety guidelines and to manage a team of front-of-house theater staffers who were hired to help run the event.

Wilfore has been a compliance officer for gigs here and there — including the load-out of the “Beetlejuice” set from the Winter Garden Theater — but like many in the industry, she yearns for the eventual return to indoor theater, where she oversaw the bustling movements of staffers and audience members.

“We love what we do,” she said, “and the fact that we haven’t been able to do it in a year is unfathomable.”

A shopper carries a bag outside a Walmart store in San Leandro, California, on Thursday, May 13, 2021.David Paul Morris | Bloomberg | Getty … END_OF_DOCUMENT_TOKEN_TO_BE_REPLACED

The rapper and entrepreneur Sean "Diddy" Combs has recorded a sale of one of his many homes. As we mentioned in our rundown of the impresario’s … END_OF_DOCUMENT_TOKEN_TO_BE_REPLACED