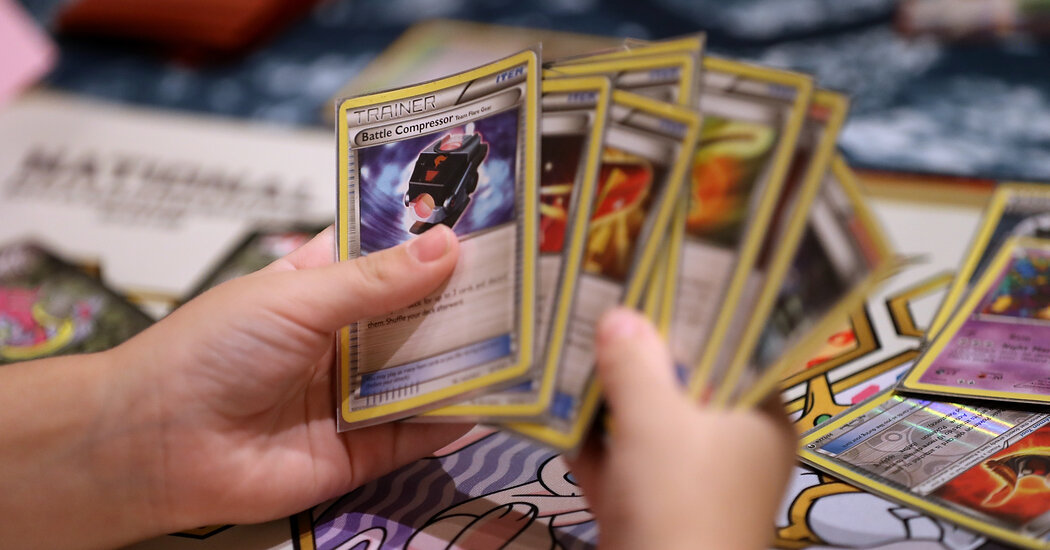 In addition to older cards multiplying in value, a similar boom is playing out for new Pokémon cards. Alan Narz, the owner of Big League Sports and Pokemon Cards in Orlando, said a few months ago he would have been thrilled by three new customers a month. Then, during the pandemic, he sometimes saw 25 new customers a day.

Sports cards have also seen a surge in value and interest during the pandemic, but Pokémon has been the main source of new interest, he said.

“It’s just crazy the amount of new people that we’ve seen,” Mr. Narz said. “I cannot imagine, for the life of me, ever again will a trading cards hobby store like ours ever see so many new people come in.”

Part of the increased demand traces back to social media influencers who have found many viewers by streaming themselves opening packs on video, he said. And with people unable to spend their money at bars, theaters and sporting events, some have used their expendable money on playing cards instead, he said.

But as demand increased, supply has remained woefully short. In addition to global supply chain issues during the pandemic, there are not many facilities that do the kind of highly specialized printing needed for the cards, Mr. Hurlocker said. Smaller card stores are barely getting any new cards to sell, with distributors focusing more on big-box retailers like Target and Walmart, he said.

That has led to the sometimes-chaotic scenes at the megastores. For some Pokémon fans who have camped outside the stores before restocks, it’s not just about the chance to pull a rare card — it’s also about participating in the phenomenon, Mr. Hurlocker said.

“It’s very clear to me at this point that they’re having a good time,” he said. “They either like the competitiveness, or they have made friends along the way, or they just want to be able to talk in the future about the time that they were camping out for Pokémon products.”

KOROPY, Ukraine — Four men tugged at long strips of fabric to lift a coffin out of the gaping hole in the backyard of a small house. They flung the … END_OF_DOCUMENT_TOKEN_TO_BE_REPLACED

The lawsuits argue that state constitutions offer more protection for abortion than the federal constitution, either by quirk of state tradition or … END_OF_DOCUMENT_TOKEN_TO_BE_REPLACED