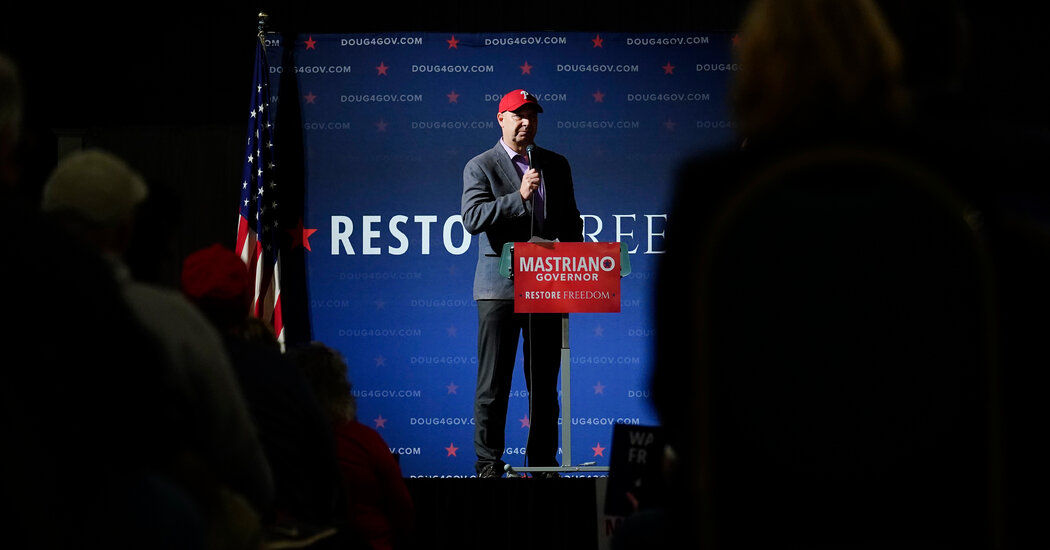 WEST CHESTER, Pa. — Disinformation has long been a feature of American politics. Mudslinging, smear campaigns, dirty tricks. Yet wading through the muck ahead of this year’s midterm elections in one fiercely contested state, Pennsylvania, shows just how thoroughly it now warps the American democratic process.

In July, a tweet made the rounds spreading a falsehood about voting. “BREAKING: Pennsylvania will not be accepting mail-in ballots,” declared someone using an account called the Donald J. Trump Tracker.

In September, mysterious letters began arriving in mailboxes in Chester County, on the old Main Line west of Philadelphia, falsely telling people that their votes might not have been counted in the last election.

No, the Democratic candidate for United States Senate, Lt. Gov. John Fetterman, does not have tattoos of the Crips, the notorious street gang from Los Angeles, as Newt Gingrich said on Fox.

contentious primaries, Pennsylvanians have experienced a deluge of false or misleading posts, photographs and videos on social media, as well as increasingly partisan, bitter and at times unhinged claims on television, radio and live streams to a degree that no one recalled seeing before.

“I’m not saying the politics was ever, you know, perfect,” Michael Nutter, the mayor of Philadelphia from 2008 to 2016, said in an interview, lamenting the seemingly bottomless depth of the problem.

“I think what’s changed is you go back 100 years and you’d have had to put a whole lot more effort into spreading lies,” he said. “Now, you can just push a button.”

A lot of attention has focused on a stroke that Mr. Fetterman suffered in May, just as he clinched the Democratic nomination. The stroke left him with an auditory processing disorder, a condition that affects the brain’s ability to filter and interpret sounds, which Republicans have said makes him unfit for office. His speech has also become more halting, and he stumbles over his words, as he did multiple times in the debate last week against his Republican opponent, Mehmet Oz, the television personality known as Dr. Oz.

Opponents used his verbal gaffes in misleading ways. A video montage by a Republican campaign operative, Greg Price, exaggerated the effects of the stroke, while a Twitter account impersonating BuzzFeed falsely claimed that Mr. Fetterman had apologized for urinating on a campaign staffer. Mr. Price did not respond to requests for comment.

Other false claims have, again, questioned the machines that count votes, while a recent flurry of posts on Telegram, the app created in Russia, have incorrectly accused the state’s top election official of not complying with legal rulings about mail-in ballots. ActiveFence, a cybersecurity company, said that these claims have spread across platforms, garnering tens of thousands of impressions.

Jill Greene, the state representative for Common Cause, the national good-government organization, said that the many unfounded and untruthful claims posed a challenge for voters.

pledged to remove or marginalize false posts ahead of the midterms.

A doctored post on Facebook, to cite one of scores of examples, showed Mr. Oz kneeling to kiss the star of Donald J. Trump along the Hollywood Walk of Fame. (In the original, he was kissing his own star.)

being repeatedly told that the American election process is deeply corrupted.

In fact, Mr. Mastriano’s candidacy has from its inception been propelled by his role in disputing the 2020 presidential election lost by Mr. Trump.

county by county, but election experts say they do not reflect factors as benign as changes in addresses.

“They’re in search of solutions to a problem that doesn’t exist,” Kyle Miller, a Navy veteran and state representative for Protect Democracy, a national advocacy organization, said in an interview in Harrisburg. “They are basing this on faulty data and internet rumors.”

Some Republican lawmakers have leaned on false claims to call for changes to rules about mail-in ballots and other measures intended to make it easier for people to vote. Several counties have already reversed some of the decisions, including the number and location of drop boxes for ballots.

Mr. Miller, among others, warned that the flurry of false claims about balloting could be a trial run for challenging the results of the presidential election in 2024, in which Pennsylvania could again be a crucial swing state.

In Chester County, a largely white region that borders Delaware and Maryland that is roughly split between Republicans and Democrats, the effort to sow confusion came the old-fashioned way: in the mail.

Letters dated Sept. 12 began arriving in mailboxes across the county, warning people that their votes in the 2020 presidential election might not have counted. “Because you have a track record of consistently voting, we find it unusual that your record indicates that you did not vote,” the letter, which was unsigned, said.

The county administrator, Robert J. Kagel, tried to assure them that their votes were actually counted. He urged anyone concerned to contact the county’s voter services department.

Even so, at county meetings in September and October, speaker after speaker lined up to question the letter and the ballot process generally — and to air an array of grievances and conspiracy theories.

They included the discredited claims of the film “2000 Mules” that operatives have been stuffing boxes for mail-in ballots. One attendee warned that votes were being tabulated by the Communist Party of China or the World Economic Forum.

“I don’t know where my vote is,” another resident, Barbara Ellis of Berwyn, told the commissioners in October. “I don’t know if it was manipulated in the machines, in another country.”

As of Oct. 20, 59 people in Chester County had contacted officials with concerns raised in the letter, but in each case, it was determined that the voters’ ballots had been cast and counted, said Rebecca Brain, a county spokesman.

Who exactly sent the letters remains a mystery, which only fuels more conspiracy theories.

“It seems very official,” Charlotte Valyo, the chairwoman of the Democratic Party in the county, said of the letter. She described it as part of “an ongoing, constant campaign to undermine the confidence in our voting system.” The county’s Republican Party did not respond to a request for comment.

Disinformation may not be the only cause of the deepening partisan chasm in the state — or the nation — but it has undoubtedly worsened it. The danger, Ms. Valyo warned, was discouraging voting by sowing distrust in the ability of election officials to tally the votes.

“People might think, ‘Why bother, if they’re that messed up?’”

AUSTIN, Texas--(BUSINESS WIRE)--As the first multifamily management company to be recognized in the Public Relations and Marketing Excellence Awards, … END_OF_DOCUMENT_TOKEN_TO_BE_REPLACED

There have been whispers of cooling housing and rental prices in the San Francisco Bay Area, but that hasn't yet translated into practical, noticeable … END_OF_DOCUMENT_TOKEN_TO_BE_REPLACED

Cars pass in Independence Square at twilight in Kyiv, Ukraine, Monday, Oct. 31, 2022. Rolling ... [+] blackouts are increasing across Ukraine as the … END_OF_DOCUMENT_TOKEN_TO_BE_REPLACED