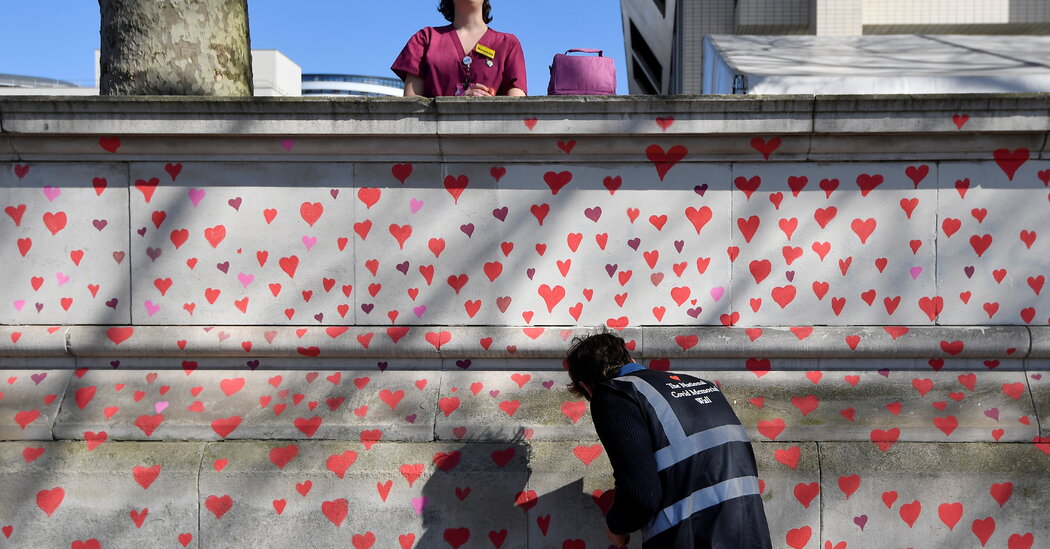 LONDON — Paula Smith couldn’t hold back her tears as she faced a sea of hand-painted red hearts covering a wall along the River Thames, each unique, each representing someone who died of Covid-19 in Britain.

With the tears welling in her eyes, Ms. Smith got back to work painting dozens more hearts on the memorial wall as passers-by stopped to watch. One heart was larger than the others, and on it she wrote in black letters: “Frank Stevens 1941–2020” — a tribute to her 78-year-old father, who died last April.

“Look at how many people we’ve lost,” said Ms. Smith, 49, who was wearing a vest that read The National Covid Memorial Wall, as she took a step back to look at her work, sobbing behind her protective mask. “We keep talking about numbers, but each heart is a person.”

As European countries crossed the one-year anniversary of the first coronavirus deaths and lockdown restrictions in recent weeks, memorials have sprung up across the continent to pay tribute to those lost to Covid-19.

studied how people have paid tribute to those lost to Covid-19.

Mr. Johnson has promised a public inquiry into the handling of the pandemic, and opposition politicians have called for it to start as soon as lockdown restrictions are gradually lifted in coming weeks. But Mr. Johnson has refused to set a date.

At the memorial, several volunteers expressed anger at the government’s response to the pandemic. Ms. Rumball, who lost her grandmother, said she had felt ignored by Mr. Johnson’s government. Her mother painted hearts next to her in silence.

Ms. Smith said too many mistakes had been made, and that she had felt let down by the National Health Service, whose workers have often been lauded by many in the public and the media as heroes. “No one was a hero to my dad,” she said.

Britain is slowly emerging from a monthslong lockdown and Mr. Johnson has promised a “great summer” ahead. Outdoor sports resumed this week, and as groups of six are now allowed to gather outside, crowds have flocked to parks in London to bask in the sun.

Numbers of new infections and deaths have plummeted in recent weeks, raising hopes that some return to normalcy would come soon. With more than 30.5 million people having received a first dose of the vaccine — 45 percent of the country’s population — Britain has rolled out one of the fastest vaccination campaigns in the world.

Yet health authorities have warned that the third wave of coronavirus infections that has swept through continental Europe may also reach Britain.

And bereaved families said returning to normal would be impossible.

“For those of us who lost someone during the first wave, last spring, we’re reliving everything now,” said Ms. Goodman. “Last night I couldn’t sleep because exactly a year ago I learned that my father had Covid, and he died days later, so looking forward to going back to normal is so difficult for us.”

With the pandemic still raging, the hand-painted hearts opposite Parliament may continue spreading for weeks, even if at a slower pace. Still, Mr. Fowler said he hoped this would stop soon.

“When this is done, please, no more hearts,” he said.

The PCR technology, which requires cycles of extreme heating and cooling, can multiply small segments of DNA millions or even billions of times in a … END_OF_DOCUMENT_TOKEN_TO_BE_REPLACED