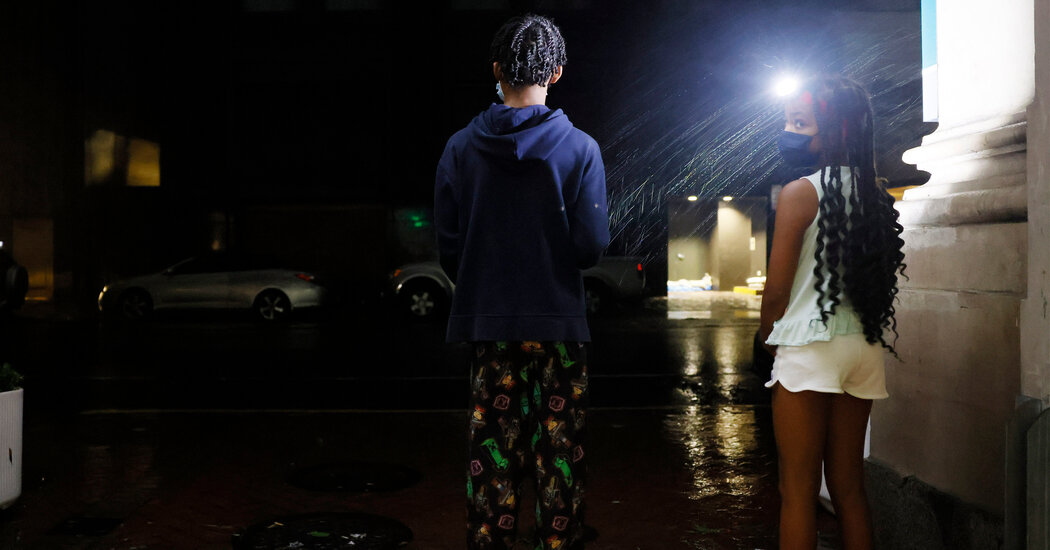 Most of New Orleans went dark on Sunday after Hurricane Ida took out transmission lines and forced power plants offline. It was an all too familiar scene in a city that has often lost power during big storms.

But this was an outage that was never supposed to happen. The utility company Entergy opened a new natural gas power plant in the city last year, pledging that it would help keep the lights on — even during hot summer days and big storms. It was one of two natural gas plants commissioned in recent years in the New Orleans area, the other one hailed by Gov. John Bel Edwards last year as a “source of clean energy that gives our state a competitive advantage and helps our communities grow.”

The storm raises fresh questions about how well the energy industry has prepared for natural disasters, which many scientists believe are becoming more common because of climate change. This year, much of Texas was shrouded in darkness after a winter storm, and last summer officials in California ordered rolling blackouts during a heat wave.

More than a million residential and commercial customers in Louisiana were without power on Monday afternoon, and Entergy and other utilities serving the state said it would take days to assess the damage to their equipment and weeks to fully restore service across the state. One customer can be a family or a large business, so the number of people without power is most likely many times higher. In neighboring Mississippi, just under 100,000 customers were without power.

some of California’s largest and deadliest wildfires.

impossible for Texas to import power by keeping the state grid largely isolated from the rest of the country to avoid federal oversight.

add more transmission lines to carry more solar and wind power from one region of the country to another. But some energy experts said the increasing frequency of devastating hurricanes, wildfires and other disasters argues against a big investment in power lines and for greater investment in smaller-scale systems like rooftop solar panels and batteries. Because small systems are placed at many homes, businesses, schools and other buildings, some continue to function even when others are damaged, providing much-needed energy during and after disasters.

Susan Guidry, a former member of the New Orleans City Council who voted against the Entergy plant, said she had worried that a storm like Ida could wreak havoc on her city and its energy system. She had wanted the city and utility to consider other options. But she said her fellow Council members and the utility had ignored those warnings.

“They said that they had dealt with that problem,” Ms. Guidry said. “The bottom line is they should have instead been upgrading their transmission and investing in renewable energy.”

Numerous community groups and city leaders opposed the gas-fired power plant, which is just south of Interstate 10 and Lake Pontchartrain, bordering predominantly African American and Vietnamese American neighborhoods. Nevertheless, the City Council approved the plant, which began commercial operations in May 2020. It generates power mainly at times of peak demand.

About a year earlier, Entergy opened a larger gas power plant in nearby St. Charles Parish. Leo P. Denault, Entergy’s chairman and chief executive, last year called that plant “a significant milestone along the clean energy journey we began more than 20 years ago.”

Some utilities have turned to burying transmission lines to protect them from strong winds and storms, but Mr. Gasteiger said that was expensive and could cause its own problems.

“Generally speaking, it’s not that the utilities are not willing to do it,” he said. “It’s that people aren’t willing to pay for it. Usually it’s a cost issue. And undergrounding can make it more difficult to locate and fix” problems.

Big changes to electric grids and power plants are likely to take years, but activists and residents of New Orleans say officials should explore solutions that can be rolled out more quickly, especially as tens of thousands of people face days or weeks without electricity. Some activists want officials to put a priority on investments in rooftop solar, batteries and microgrids, which can power homes and commercial buildings even when the larger grid goes down.

“We keep walking by the solutions to keep people safe in their homes,” said Logan Atkinson Burke, executive director of the Alliance for Affordable Energy, a consumer group based in New Orleans. “When these events happen, then we’re in crisis mode because instead we’re spending billions of dollars every year now to rebuild the same system that leaves people in the dark, in a dire situation.”

Some residents have already invested in small-scale energy systems for themselves. Julie Graybill and her husband, Bob Smith, installed solar panels and batteries at their New Orleans home after Hurricane Isaac blew through Louisiana in 2012. They lost power for five days after Isaac, at times going to their car for air-conditioning with their two older dogs, said Ms. Graybill, 67, who retired from the Tulane University School of Medicine.

“We would sit in the car about every hour,” she said. “My husband said, ‘We are never doing this again.’” Mr. Smith, 73, who is also retired, worked as an engineer at Royal Dutch Shell, the oil company.

The couple have set up a little power station on their porch so neighbors can charge their phones and other items. Only a few other homes on their street have solar panels, but no one else nearby has batteries, which can store the power that panels generate and dispense it when the grid goes down.

“We’re told we’re not going to have power for three weeks,” Ms. Graybill said. “The only people who have power are people with generators or solar panels. We lived through Katrina. This is not Katrina, so we’re lucky.”

He did not respond, but days later Apple posted an internal video in which company executives doubled down on bringing workers back to the office. In the video, Dr. Sumbul Desai, who helps run Apple’s digital health division, encouraged workers to get vaccinated but stopped short of saying they would be required to, according to a transcript viewed by The Times.

The video didn’t sit well with some employees.

“OK, you want me to put my life on the line to come back to the office, which will also decrease my productivity, and you’re not giving me any logic on why I actually need to do that?” said Ashley Gjovik, a senior engineering program manager.

When the company delayed its return-to-office date on Monday, a group of employees drafted a new letter, proposing a one-year pilot program in which people could work from home full time if they chose to. The letter said an informal survey of more than 1,000 Apple employees found that roughly two-thirds would question their future at the company if they were required to return to the office.

In Los Angeles, Endeavor, the parent company of the William Morris Endeavor talent agency, reopened its Beverly Hills headquarters this month. But it decided to shut down again last week when the county reimposed its indoor mask mandate in the face of surging case counts. An Endeavor spokesman said the company had decided that enforcement would be too difficult and would hinder group meetings.

The employment website Indeed had been targeting Sept. 7 as the date when it would start bringing workers back on a hybrid basis. Now it has begun to reconsider those plans, the company’s senior vice president of human resources, Paul Wolfe, said, “because of the Delta variant.”

Some companies said the recent spike in cases had not yet affected their return-to-office planning. Facebook still intends to reopen at 50 percent capacity by early September. IBM plans to open its U.S. offices in early September, with fully vaccinated employees free to go without a mask, and Royal Dutch Shell, the gas company, has been gradually lifting restrictions in its Houston offices, prompting more of its workers to return.

Hewlett Packard Enterprise began allowing employees to return to its offices Monday, bolstered by a survey of its California employees that found 94 percent were fully vaccinated. 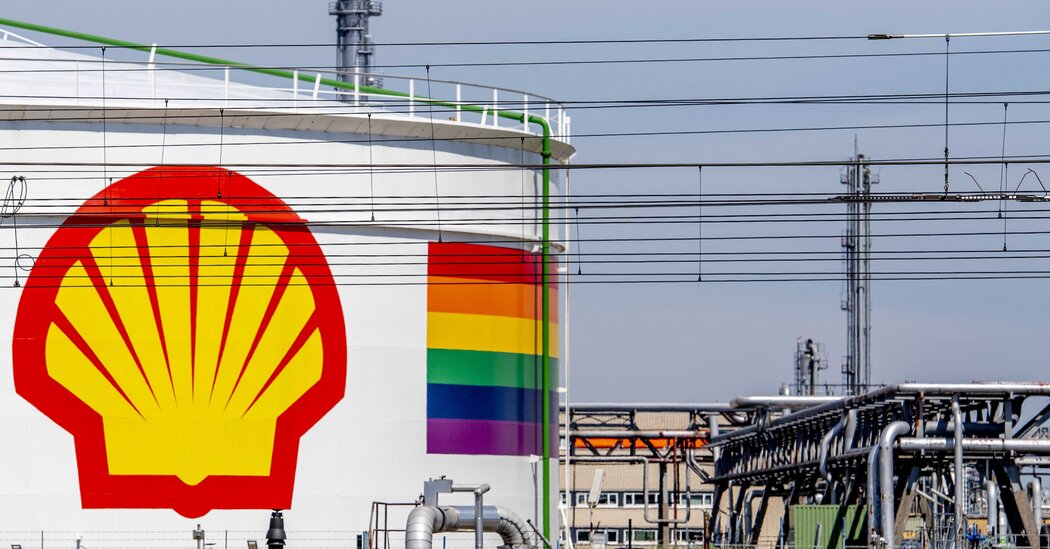 The District Court in The Hague ruled that Shell was “obliged” to reduce its carbon dioxide emissions of its activities by 45 percent at the end of 2030 compared with 2019. Shell is based in The Hague but is a global producer and supplier of oil and natural gas and other energy.

Shell has already adopted targets for emissions reduction, but the court requirements are likely to represent a substantial acceleration of the process of reducing emissions-producing fuels like oil and gas.

The ruling applies only in the Netherlands. Still, the defeat of an oil giant in a case brought by Milieudefensie, an environmental group, and other activists appeared to represent a kind of breakthrough in terms of a court’s willingness to dictate to a major business what it must do globally to protect the climate.

“But the court believes that the consequences of severe climate change are more important than Shell’s interests,” she added.

The court appeared to have accepted the environmentalists’ argument that not taking drastic measures on climate change would put lives in jeopardy.

“Severe climate change has consequences for human rights, including the right to life. And the court thinks that companies, among them Shell, have to respect those human rights,” Ms. Honée said.

The company said that it already had an extensive program to deal with climate change including billions of dollars of investment in low carbon energy including hydrogen, renewables like wind and solar and electric vehicle charging.

Reza Estakhrian | The Image Bank | Getty ImagesOpportunity zone fund investments are back. Granted, they never went away, but after generating a great … END_OF_DOCUMENT_TOKEN_TO_BE_REPLACED