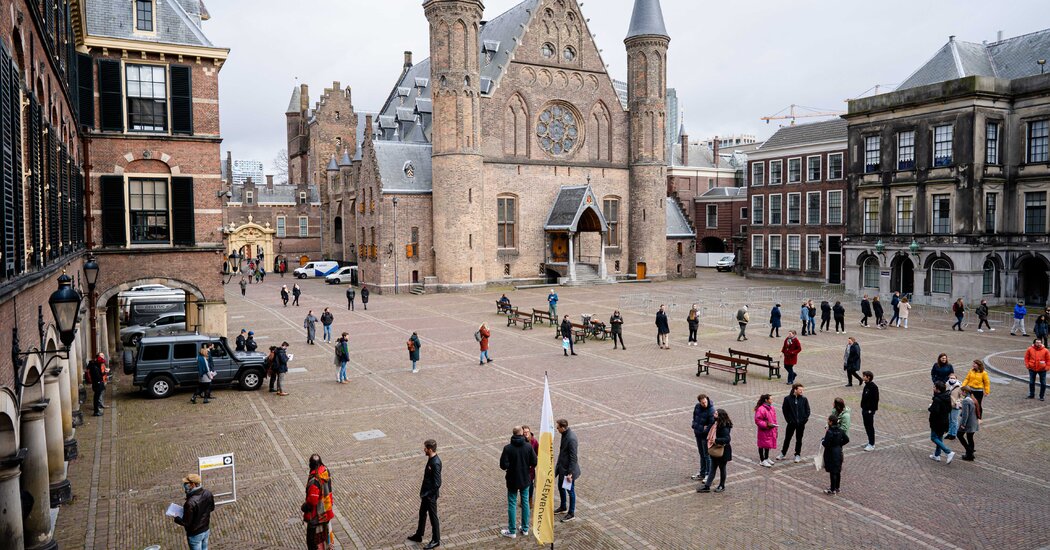 LEIDEN, the Netherlands — Voters in the Netherlands cast their ballots on Wednesday in one of the first major European elections to take place during the coronavirus pandemic that has swept across the continent in successive waves.

Prime Minister Mark Rutte’s liberal-right Party for Freedom and Democracy had been leading in the polls up to the vote Wednesday, despite a scandal over a benefits crackdown targeting mainly poor families that brought down his government in January, setting him on course for a fourth term.

Other front-runners to lead a new government are Geert Wilders, a populist who has opposed immigration from Muslim countries and called for a ban of the Quran, with his Party for Freedom, and Sigrid Kaag, a former United Nations special envoy for Syria, who is leading D66, a liberal-democratic party. Several special-interest parties, supporting Europe, equal rights and other specific agendas are expected to get seats for the first time.

The election is being closely watched for insights into the staying power of the wave of populism that has swept the continent in the past two decades and brought politicians like Mr. Wilders to prominence. Another right-wing party, the Forum voor Democratie, led by Thierry Baudet, was doing well in the polls last summer, before the election was called, but infighting led to some prominent politicians leaving and starting their own party.

voted in presidential elections in January, re-electing the center-right Marcelo Rebelo de Sousa for a second term in office.

The pandemic has changed the usual dynamic of organizing elections in the Netherlands, but did not seem to affect turnout on Wednesday. Long lines of socially-distanced voters stood waiting in the early afternoon in the historical center of Leiden, a university town near The Hague. At many polling stations voters were allowed to take home the red pencils they used to cast their ballots, a measure to help prevent the virus from spreading.

“There is no way anyone can get corona with all these measures,” said Niels Romijn, a civil servant, as he entered a public library to cast his ballot. “Everybody was super chill,” he said, happily showing off his free red pencil. “Civil duty,” he said with a laugh.

until November to ramp up testing, and now, the vaccination process has been advancing slowly.

However, local issues, not the government’s handling of the coronavirus, dominated the election campaign.

Mr. Rutte and his cabinet resigned in January over a scandal involving the tax authorities’ targeting of people, mostly poor, who had made administrative mistakes in their requests for child benefits. Many were ruined financially after being forced to pay back benefits to which they had been entitled.

Broader liberal market policies put forward by Mr. Rutte, who has been in power since 2010, were also a focus on the campaign trail, with opponents questioning his government’s repeated cutbacks in health care, policing and other essential services.

While his Party for Freedom and Democracy is ahead in the polls, it has lost some support in recent weeks, potentially undermining his position.

Mr. Rutte has ruled out any form of cooperation with Mr. Wilders’ Freedom Party, meaning that he will likely have to engage with more left-leaning parties.

Asbestos in the home can be downright scary. This extremely dangerous material has been linked to all kinds of health problems, including … END_OF_DOCUMENT_TOKEN_TO_BE_REPLACED

ATLANTA — Before the three men convicted of murdering Ahmaud Arbery were sentenced on Monday on federal hate crime charges, they asked a judge to … END_OF_DOCUMENT_TOKEN_TO_BE_REPLACED