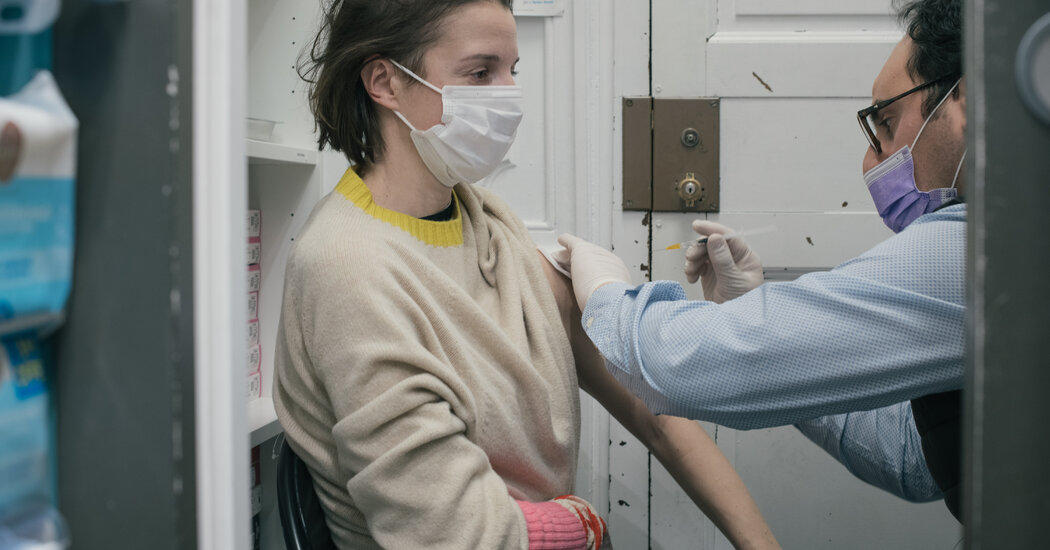 BRUSSELS — The calls began in December, as the United States prepared to administer its first batches of Covid-19 vaccine. Even then, it was clear that the European Union was a few weeks behind, and its leaders wanted to know what they could learn from their American counterparts.

The questions were the same, from President Emmanuel Macron of France, President Ursula von der Leyen of the European Commission, and Alexander De Croo, the prime minister of Belgium.

“How did you do it?” Dr. Moncef Slaoui, the United States vaccine czar, recalled them asking on the calls. “And what do you think we missed?”

Since then, the rollout gap between Europe and the United States has only widened, and some of the countries hardest hit early in the pandemic are facing a deadly third wave of infections. France, large parts of Italy, and other regions are back in lockdown. Roughly 20,000 Europeans die of Covid-19 each week.

temporarily halt the distribution of the AstraZeneca vaccine. Most of them resumed using it on Friday, after Europe’s top drug regulator vouched for its safety, but public confidence in the shot has been badly shaken.

Vaccine salvation remains, for now, still tantalizingly out of reach. Only about 10 percent of Europeans have received a first dose, compared with 23 percent in the United States and 39 percent in Britain.

There is no single culprit. Rather, a cascade of small decisions have led to increasingly long delays. The bloc was comparatively slow to negotiate contracts with drugmakers. Its regulators were cautious and deliberative in approving some vaccines. Europe also bet on vaccines that did not pan out or, significantly, had supply disruptions. And national governments snarled local efforts in red tape.

leaders pointing fingers over why some of the world’s richest countries, home to factories that churn out vast quantities of vaccine, cannot keep pace with other wealthy nations in injecting its people.

Compared with nearly all the rest of the world, the European Union is in an admirable position. Its leaders say it remains feasible to vaccinate 70 percent of the Continent by this summer. The bloc has ordered enough doses to fully vaccinate its population at least three times, to the consternation of countries that will wait years for full coverage.

But Europeans are stung, especially, to see Britain’s rollout going so well after the country exited the bloc. Everyone wants to know why the E.U. has not triumphed.

‘Not Equipped for a Gunfight’

The European Union trailed the United States and Britain from the start.

Washington had already spent billions on clinical trials and manufacturing by the time Europe decided to pool its resources and negotiate as a bloc. In mid-June, the European Commission, the bloc’s executive branch, announced a joint vaccine purchase with a $3.2 billion pot.

$10 billion budget. European officials say it’s unfair to compare the two figures because neither amount is a complete picture of all the money spent on vaccines. But there is no dispute that in Washington, officials had decided that money was no object if vaccines could avert the economic cost of a lockdown. Europe, on the other hand, was on a tight budget, so its negotiators chased cheaper doses.

“Pricing has been important since the beginning,” Sandra Gallina, the E.U.’s main vaccine negotiator, told lawmakers in February. “We are talking about taxpayers’ money.”

AstraZeneca has slashed its delivery plans, telling European leaders that it would hand over 100 million fewer doses by the middle of the year, according to the commission’s president, Ms. von der Leyen.

Only one in five French people now trust the AstraZeneca vaccine, according to a poll by the Elabe Institute published Tuesday.

Now Europe is striking a more aggressive tone about protecting its interests. Italy blocked a small shipment of AstraZeneca vaccines to Australia earlier this month. Ms. von der Leyen upped the ante this week, threatening to use an emergency mechanism, last used during the 1970s oil crisis, that would allow the bloc to seize production of vaccines.

“It is hard to explain to our citizens why vaccines produced in the E.U. are going to other countries,” Ms. von der Leyen said.

Early this month, Toon Vanagt, a Belgian tech entrepreneur, accompanied his 77-year-old father to a vaccination center north of Brussels. Mr. Vanagt, 47, was not eligible for the vaccine himself, but a worker there offered him a leftover shot, which he gladly accepted.

software companies have rushed to link patients with doses that would otherwise expire. But in Belgium, when Mr. Vanagt tweeted that he had been vaccinated, it became a mini scandal. Health officials rebuked the vaccine center, which quickly apologized: “A minor communication problem, very quickly rectified.”

Belgium’s rollout is one example of the Continent’s rigid approach to following vaccination guidelines. In a country where nursing home infections led to one of the highest per capita death tolls, the policy was intended to strictly prioritize the neediest residents.

Many European countries are also stockpiling doses to guarantee that everyone who receives a first injection will receive the second dose on time. The United States and Britain have been more flexible, erring on the side of giving more first injections.

“In the U.S., there is a much more flexible, liberal system and you just vaccinate people who come along. Same in the U.K. And it can go quicker. Here it is quite regulated,’’ said Steven Van Gucht, the Belgian government’s top virologist, who said it was too soon to know which system is better.

Administrative hiccups have exacerbated the problems. In Frankfurt, Elke Morgenstern was escorted out of a vaccine center because she enrolled using the wrong online application. “It was embarrassing,” said Ms. Morgenstern, adding that she qualified for a vaccine because of a pre-existing condition.

Because of the AstraZeneca shortages, she cannot book another appointment before May.

“It is a catastrophe how they are handling things here,” she said.

In the Lombardy region of Italy, once the epicenter of the pandemic, the vaccination campaign got off to a slow start in part because the top health care official refused to marshal medical workers over the Christmas holidays. Technical difficulties worsened the problems at the region’s vaccination centers.

“Some sessions were empty,” said Paola Pedrini, the regional secretary general for Italy’s family doctors federation. “For some others, they called 900 people when they could only vaccinate 600.”

For all the problems, Dr. Slaoui said Europeans are in an admirable position. By the numbers, the Continent is about five weeks behind the United States, with vaccine supply expected to increase steadily. “It’s too late to have taken the first bite,” he said. “But they’re in a good place.”

Dr. Van Gucht, of Belgium, agreed. But he said European leaders will likely take nationalistic lessons from the past months.

“I think we relied a little bit too much on the free markets,” he said. “What you really need to do from the beginning is really make sure you produce the vaccines on your territory and that they’re destined for your own population.”

Days before the bout to defend her championship title, Zhang Weili, China’s most famous mixed martial arts fighter, sensed her opponent was trying to … END_OF_DOCUMENT_TOKEN_TO_BE_REPLACED

The Australia Letter is a weekly newsletter from our Australia bureau. Sign up to get it by email. This week’s issue is written by Jane Perlez, who … END_OF_DOCUMENT_TOKEN_TO_BE_REPLACED