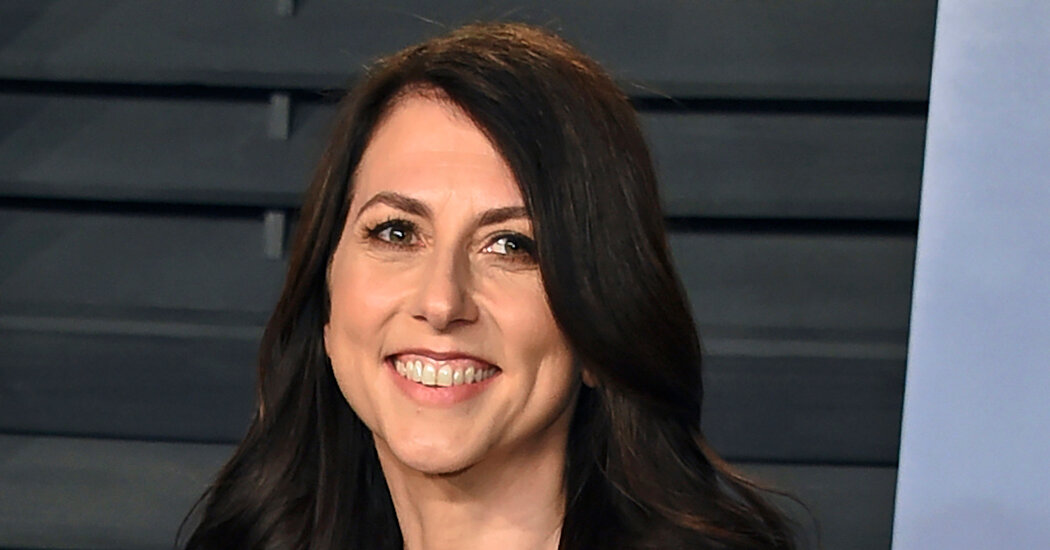 The billionaire philanthropist MacKenzie Scott has remarried after her high-profile divorce from Amazon’s founder, Jeff Bezos.

In a letter posted to the website of the philanthropy nonprofit organization the Giving Pledge on Saturday, Dan Jewett, a science teacher at the prestigious Seattle school attended by her children, said that he was “grateful for the exceptional privilege it will be to partner in giving away assets with the potential to do so much good when shared.”

What might otherwise be a wholly private, personal decision, takes on unusual significance in light of the resources at Ms. Scott’s disposal — $53 billion according to Forbes’s most recent estimate — and her stated intention to give the majority of it away.

In addition to the note on the website of the Giving Pledge, Ms. Scott, a published novelist, changed her author page on the Amazon website to read, “She lives in Seattle with her four children and her husband, Dan.”

The Giving Pledge was started by the software mogul Bill Gates, his wife, Melinda, and the billionaire investor Warren Buffett in 2010. Signatories agree to give away the majority of their wealth.

For Ms. Scott, her remarriage is the latest twist in a life where she has quietly but firmly set the limits of her own privacy. Rather than remaining anonymous in her giving, she chose to announce nearly $6 billion in grants and gifts last year in a pair of posts to the site Medium.

“I’ve been calling this discreet transparency. It’s basically transparency but entirely on the givers’ own terms,” said Benjamin Soskis, a senior research associate in the Center on Nonprofits and Philanthropy at the Urban Institute. “It gives a simulacrum of transparency but it’s still entirely discretionary.”

Ms. Scott occupies a unique place in the world of mega-philanthropy. She does not have the decades of experience that Mr. Gates or former Mayor Michael Bloomberg of New York have built up. But through the sheer speed and scale of her donations, and the way that she has given her gifts with few of the highly restrictive conditions and onerous reporting requirements that had become common, Ms. Scott managed to help shift the debate about the direction of the field.

She gave extensively to Y.M.C.A. and Y.W.C.A. chapters around the country, to food banks and historically Black colleges and universities. She made donations to organizations that support women’s rights, L.G.B.T.Q. equality, and efforts to fight climate change and racial inequities.

report released jointly last week by the groups Candid and the Center for Disaster Philanthropy. The groups found that $4 billion of the $6 billion that Ms. Scott gave away last year could be considered pandemic response, which accounted for nearly three-quarters of Covid-19-related giving by billionaires and other high-net-worth individuals.

“She’s made a huge impact,” said Grace Sato, director of research at Candid. “The way that she gave swung the trends in what we were seeing.”

Ms. Scott was married to Mr. Bezos for 25 years. They divorced in 2019 and her share of the divorce settlement was 4 percent of Amazon’s stock. While her former husband became a tabloid mainstay after their divorce, hanging out on superyachts with fellow magnates and celebrities, Ms. Scott mostly stayed out of the limelight.

In a statement, Mr. Bezos said, “Dan is such a great guy, and I’m happy and excited for the both of them.”

It is unclear when Ms. Scott and Mr. Jewett were married. She had not commented about him in any of the publicity around her giving last year. Her representatives did not respond to requests for comment.

“In a stroke of happy coincidence,” Mr. Jewett wrote in his letter posted on the page for the Giving Pledge, “I am married to one of the most generous and kind people I know — and joining her in a commitment to pass on an enormous financial wealth to serve others.”

“I don’t think it’s that surprising to me that she added her husband,” said Debra Mesch, professor at the Women’s Philanthropy Institute at Indiana University. “She’s saying, ‘We’re a couple now and our household giving is going to be together.’ That’s what a lot of couples do.”

Describing himself as “a teacher for the majority my life,” Mr. Jewett noted the strangeness of a declaration of his giving intentions, “as I have never sought to gather the kind of wealth required to feel like saying such a thing would have particular meaning.” Mr. Jewett teaches at the Lakeside School, which counts Mr. Gates among its prominent alumni.

Mr. Soskis, of the Urban Institute, said that in the past the events that have shaped giving decisions tended to come late in life, centering on retirement and death, in the form of bequests. Leading philanthropists are now much younger, raising a new set of issues. Priscilla Chan and her husband, the Facebook founder Mark Zuckerberg, cited the birth of their daughter as a motivating factor in their giving.

“The fact that giving is now happening in the prime of life means that giving decisions and giving narratives are being shaped by different life cycle events like divorce and marriage and birth in a way that hadn’t really been the case 30 or 40 years ago,” Mr. Soskis said.

Denmark on Wednesday became the first country to plan to permanently stop administering the AstraZeneca vaccine, a month after suspending its use … END_OF_DOCUMENT_TOKEN_TO_BE_REPLACED

Michael Sfard, an Israeli human rights lawyer who represents Professor Goldreich, said that even if his client did support B.D.S., such support should … END_OF_DOCUMENT_TOKEN_TO_BE_REPLACED