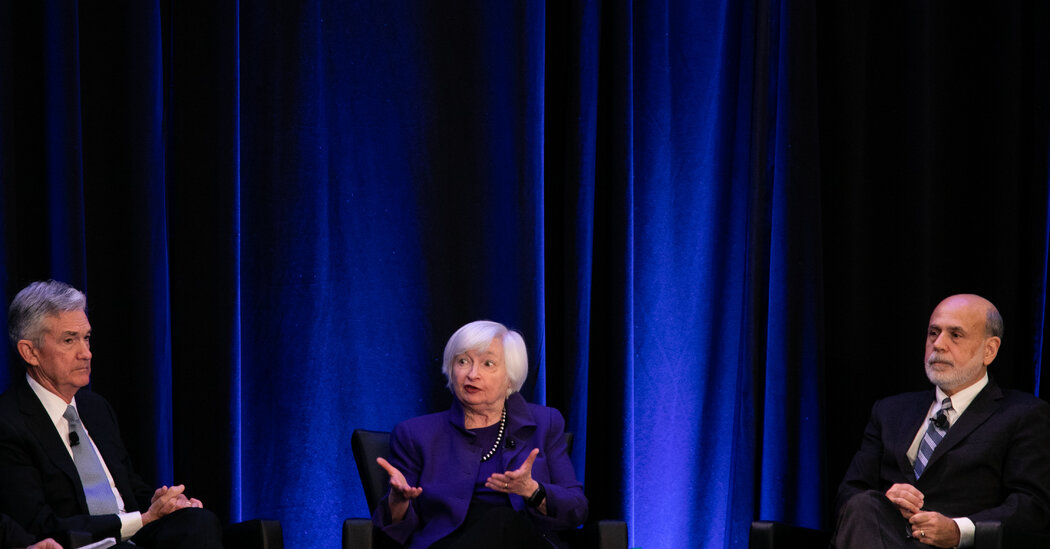 America’s top two economic officials told senators on Wednesday that the economy is healing but still in a deep hole and that continued government support is providing a critical lifeline to families and businesses.

The remarks by Jerome H. Powell, the Federal Reserve chair, and Janet L. Yellen, the Treasury Secretary and Mr. Powell’s immediate predecessor at the Fed, before the Senate Banking Committee echoed their testimony before House lawmakers on Tuesday.

Mr. Powell said in his remarks that the government averted the worst possible outcomes in the pandemic economic recession with its aggressive spending response and super-low Fed interest rates.

“But the recovery is far from complete. So at the Fed, we will continue to provide the economy the support that it needs for as long as it takes,” he said.

the recently passed $1.9 trillion relief package, said responding to a crisis with a needed surge of temporary spending without paying for it was “appropriate.”

“Longer-run, we do have to raise revenue to support permanent spending that we want to do,” she said.

She said expanded unemployment insurance, part of the recent relief package, does not seem to be discouraging work and is needed at a time when the labor market is not at full strength.

“While unemployment remains high, it’s important to provide the supplementary relief,” Ms. Yellen said, noting that the aid lasts until the fall. She said the aid should be phased out as the economy recovers.

The Biden administration is also making plans for a $3 trillion infrastructure package, and Republicans on the committee expressed concern about the mounting deficits facing United States.

“I do worry that the Fed may be behind the curve when inflation inevitably picks up,” Senator Patrick J. Toomey, Republican of Pennsylvania, said during his opening remarks.

But Mr. Powell has consistently pushed back on warnings about runaway inflation and did so again on Wednesday.

stuck in the Suez Canal, but also in general as the economy reopens — he struck a similarly unconcerned tone.

“A bottleneck, by definition, is temporary,” he said.

He also batted back concerns about a recent increase in market-based interest rates. The yield on 10-year Treasury notes, a closely watched government bond, has moved up since the start of the year.

“Rates have responded to news about vaccination, and ultimately, about growth,” Mr. Powell said. “That has been an orderly process. I would be concerned if it were not an orderly process, or if conditions were to tighten to a point where they might threaten our recovery.”

ROSWELL, Ga.--(BUSINESS WIRE)--Berkshire Hathaway HomeServices Georgia Properties, one of the largest and most successful real estate organizations in … END_OF_DOCUMENT_TOKEN_TO_BE_REPLACED

The real estate market seems to have a split personality.On the positive side for homebuyers, the number of properties for sale shot up by a … END_OF_DOCUMENT_TOKEN_TO_BE_REPLACED

Kim Tae-Ri plays a gun-toting time traveler in 'Alienoid.' Well Go USA Director Choi Dong-hoon likes a challenge. That much is apparent in his latest … END_OF_DOCUMENT_TOKEN_TO_BE_REPLACED