Roughly 17.3 percent of all office space in Manhattan is available for lease, the highest proportion in at least three decades. Asking rents on the island have dropped to just over $74 a square foot, from nearly $82 at the beginning of 2020, according to a recent report by the real estate services company Newmark. Elsewhere, asking rents have largely stayed flat from a year ago, including in Boston and Houston, but have climbed slightly in Chicago.

The Japanese clothing brand Uniqlo, whose United States headquarters are in Manhattan’s SoHo neighborhood, recently relocated to another office building nearby, an open layout with tables designed for its work force of 130 people who will come into the office only a few days a week. Many of its office workers will keep working remotely after the pandemic, while some employees, like those in the marketing department, will hold meetings occasionally in SoHo.

“As a leader, it has been challenging because meeting people face-to-face is so important,” said Daisuke Tsukagoshi, the chief executive of Uniqlo USA. “However, since we are a Japanese company with global reach, the need for remote collaboration among many centers has always been part of our culture.”

The stock prices of the big landlords, which are often structured as real estate investment trusts that pass almost all of their profit to investors, trade well below their previous highs, even as the wider stock market and some companies in other industries like airlines and hotels that were hit hard by the pandemic have hit new highs. Shares of Boston Properties, one of the largest office landlords, are down 29 percent from the prepandemic high. SL Green, a major New York landlord, is 26 percent lower.

Fitch Ratings estimated that office landlords’ profits would fall 15 percent if companies allowed workers to be at home just one and a half days a week on average. Three days at home could slash income by 30 percent.

Senior executives at property companies claim not to be worried. They argue that working from home will quickly fade once most of the country is vaccinated. Their reasons to think this? They say many corporate executives have told them that it is hard to effectively get workers to collaborate or train young professionals when they are not together. 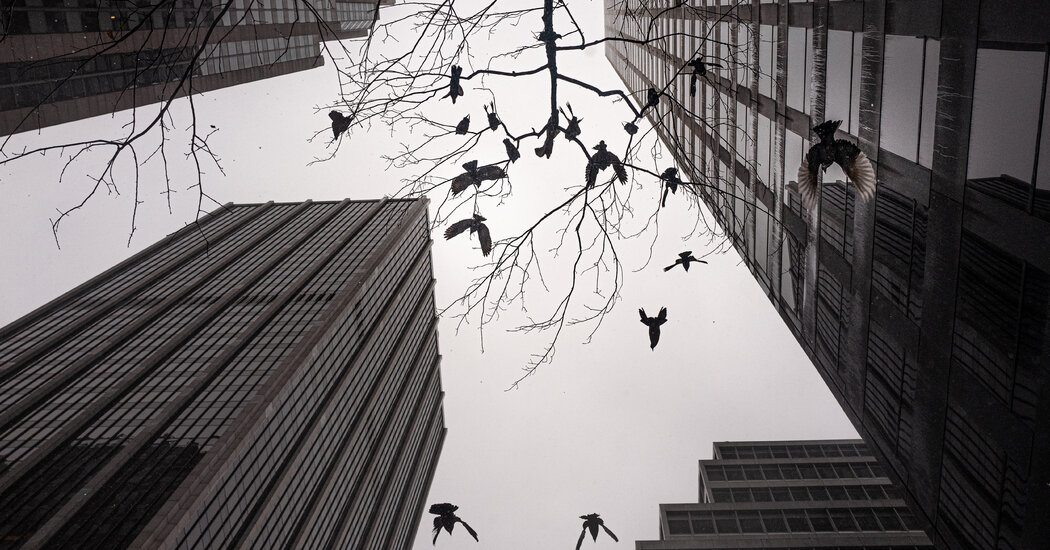 Spotify’s headquarters in the United States fills 16 floors of 4 World Trade Center, a towering office building in Lower Manhattan that was the first to rise on the site of the 2001 terror attacks. Its offices will probably never be full again: Spotify has told employees they can work anywhere, even in another state.

A few floors down, MediaMath, an advertising tech company, is planning to abandon its space, a decision fueled by its new remote-work arrangements during the pandemic.

In Midtown Manhattan, Salesforce, whose name adorns a 630-foot building overlooking Bryant Park, expects workers to be in the office just one to three days a week. A nearby law firm, Lowenstein Sandler, is weighing whether to renew its lease on its Avenue of the Americas office, where 140 lawyers used to work five days a week.

“I could find few people, including myself, who think we are going to go back to the way it was,” said Joseph J. Palermo, the firm’s chief operating officer.

sparked an extraordinary exodus of workers from office buildings, what had seemed like a short-term inconvenience is now clearly becoming a permanent and tectonic shift in how and where people work. Employers and employees have both embraced the advantages of remote work, including lower office costs and greater flexibility for employees, especially those with families.

Beyond New York, some of the country’s largest cities have yet to see a substantial return of employees, even where there have been less stringent government-imposed lockdowns, and some companies have announced that they are not going to have all workers come back all the time.

In recent weeks, major corporations, including Ford in Michigan and Target in Minnesota, have said they are giving up significant office space because of their changing workplace practices, while Salesforce, whose headquarters occupies the tallest building in San Francisco, said only a small fraction of its employees will be in the office full time.

But no city in the United States, and perhaps the world, must reckon with this transformation more than New York, and in particular Manhattan, an island whose economy has been sustained, from the corner hot dog vendor to Broadway theaters, by more than 1.6 million commuters every day.

to return in early May, in part as a signal to other employers that filling New York’s buildings is a key to its recovery.

Still, about 90 percent of Manhattan office workers are working remotely, a rate that has remained unchanged for months, according to a recent survey of major employers by the Partnership for New York City, an influential business group, which estimated that less than half of office workers would return by September.

Across Midtown and Lower Manhattan, the country’s two largest central business districts, there has never been more office space — 16.4 percent — for lease, much higher than in past crises, including after the Sept. 11 terror attacks in 2001 and the Great Recession in 2008.

As more companies push back dates for returning to offices and make at least some remote work a permanent policy, the consequences for New York could be far-reaching, not just for the city’s restaurants, coffee shops and other small businesses, but for municipal finances, which depend heavily on commercial real estate.

Sarah Patellos, who is on Spotify’s music team, has been working from a dining room table in Truckee, Calif., a mountain town near Lake Tahoe where she has spent most of the past year after flying there for a weekend trip in March 2020 and getting stuck because of government-imposed lockdowns.

on CNBC. “As for everyone working from home all the time, there is also zero chance of that.’’

from the $1.9 trillion federal stimulus package: $5.95 billion in direct aid and another $4 billion for schools, a City Hall spokeswoman said.

While that addresses immediate needs, the city still faces an estimated $5 billion budget deficit next year and similar deficits in the following years, and a changing work culture could hobble New York’s recovery.

The amount of office space in Manhattan on the market has risen in recent months to 101 million square feet, roughly 37 percent higher than a year ago and more than all the combined downtown office space in Los Angeles, Atlanta and Dallas. “This trend has shown little signs of slowing down,” said Victor Rodriguez, director of analytics at CoStar, a real estate company.

At least one industry, however, is charging in the opposite direction. Led by some of the world’s largest companies, the technology sector has expanded its footprint in New York during the pandemic. Facebook has added 1 million square feet of Manhattan office space, and Apple added two floors in a Midtown Manhattan building.

And the surge in available commercial real estate has actually been a boon for some new businesses that have been able to find spaces at rents that are lower than they were before the pandemic.

“I’ve seen the obituary for New York City many times,” said Brian S. Waterman, the executive vice chairman of Newmark, a commercial real estate services firm. “The office reboarding will start to occur in May, June and July, and you are going to have a much fuller occupancy once we hit September.”

rally behind an idea that seemed unthinkable before the pandemic: converting distressed office buildings in Manhattan into low-income housing.

The record vacancy rate has been driven by companies across almost all industries, from media to fashion, that have discovered the advantages of remote work.

Beside the cost savings of operating a scaled-down office or no office at all, modern technology and communications have allowed workers to stay connected, collaborate from afar and be more productive without lengthy commutes. Parents are also clamoring for more flexibility to care for their children.

“We believe that we’re on top of the next change, which is the Distributed Age, where people can be more valuable in how they work, which doesn’t really matter where you spend your time,” said Alexander Westerdahl, the vice president of human resources at Spotify, the Stockholm-based streaming music giant that has 6,500 employees worldwide.

For now, Spotify does not plan to reduce its New York footprint, but as of February, the company told its United States employees — 2,100 of whom had worked at the Manhattan office — that they could work from pretty much anywhere.

“The change is mainly driven by globalization and digitalization, and our tools are much, much better at allowing for people to work from anywhere,” Mr. Westerdahl said.

Remote work, of course, is not without significant downsides.

The blurry lines that already existed between work and personal life have been all but obliterated during the pandemic. Without the time spent commuting in the morning and at night, people are logging on to work earlier in the day and staying connected later into the night.

And despite modern technology and video conferencing capabilities, companies are struggling to foster workplace cultures and make employees, especially new hires, feel welcome and part of a team.

Those concerns have weighed heavily on executives at Kelley Drye, a law firm founded in 1836 in New York, which is moving from Park Avenue near Grand Central Terminal to 3 World Trade Center in Lower Manhattan.

“Zoom and Teams are great,” said Andrea L. Calvaruso, a lawyer who is the chair of the firm’s trademark and copyright group, but she added that “there’s no substitute for sitting down in a beautiful new collaborative and working together without distractions.”

But Ms. Patellos, despite being unprepared after being stuck in California — she had to buy a keyboard and monitor — soon found herself connecting with colleagues all over the world just as she had in her New York office.

“I fell into a rhythm,” said Ms. Patellos, who is still deciding where to eventually move. “I maintained a bit of East Coast hours, starting my days a little earlier and ending a bit earlier. Before I knew it, it became the norm and a routine.”

The reality is somewhat more complex. Israel’s Supreme Court is weighing the claims of a Jewish organization that has legal title to the Sheikh Jarrah … END_OF_DOCUMENT_TOKEN_TO_BE_REPLACED