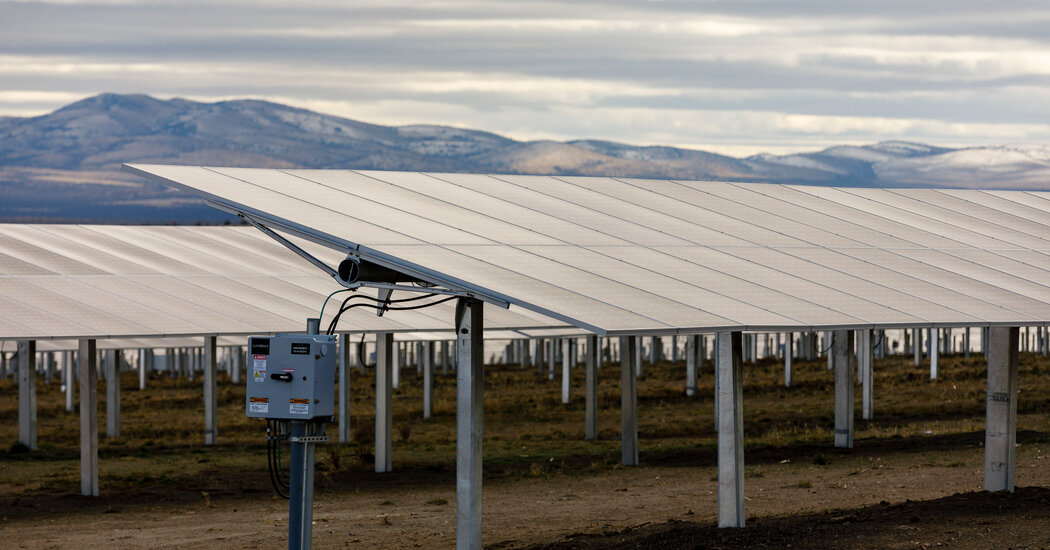 WASHINGTON — President Biden has repeatedly pledged to work with China on issues like climate change while challenging Beijing on human rights and unfair trade practices.

But those goals are now coming into conflict in the global solar sector, presenting the Biden administration with a tough choice as it looks to expand the use of solar power domestically to reduce the United States’ carbon dioxide emissions.

The dilemma stems from an uncomfortable reality: China dominates the global supply chain for solar power, producing the vast majority of the materials and parts for solar panels that the United States relies on for clean energy. And there is emerging evidence that some of China’s biggest solar companies have worked with the Chinese government to absorb minority workers in the far western region of Xinjiang, programs often seen as a red flag for potential forced labor and human rights abuses.

This week, Mr. Biden is inviting world leaders to a climate summit in Washington, where he is expected to unveil an ambitious plan for cutting America’s emissions over the next decade. The administration is already eyeing a goal of generating 100 percent of the nation’s electricity from carbon-free sources such as solar, wind or nuclear power by 2035, up from only 40 percent last year. To meet that target, the United States may need to more than double its annual pace of solar installations.

many of which are imported from Chinese-owned factories in Vietnam, Malaysia and Thailand.

“It’s put the Democrats in a hard position,” said Francine Sullivan, the vice president for business development at REC Silicon, a polysilicon maker based in Norway with factories in the United States. “Do you want to stand up to human rights in China, or do you want cheap solar panels?”

The administration is increasingly under pressure from influential supporters not to turn a blind eye to potential human rights abuses in order to achieve its climate goals.

“As the U.S. seeks to address climate change, we must not allow the Chinese Communist Party to use forced labor to meet our nation’s needs,” Richard L. Trumka, the president of the A.F.L.-C.I.O., wrote in a letter on March 12 urging the Biden administration to block imports of solar products containing polysilicon from the Xinjiang region.

Xinjiang is now notorious as the site of a vast program of detention and surveillance that the Chinese government has carried out against Muslim Uyghurs and other minority groups. Human rights groups say the Chinese authorities may have detained a million or more minorities in camps and other sites where they face torture, indoctrination and coerced labor.

Jinko Solar denied those allegations, as did the Chinese government. Zhang Longgen, a vice chairman of Xinjiang Daqo — a unit of one of the companies cited by Horizon Advisory — said that the polysilicon plants were not labor intensive, and that the company’s workers were freely employed and could quit if they wanted, according to Global Times, a Chinese Communist Party-owned newspaper. The report said that only 18 of the 1,934 workers at Xinjiang Daqo belonged to ethnic minorities, and that none were Uyghur.

a sweeping ban on cotton and tomatoes from the region. Those restrictions have forced a reorganization of global supply chains, especially in the apparel sector.

The Biden administration has said it is still reviewing the Trump administration’s policies, and it has not yet signaled whether it will pursue other bans on products or companies. But both Mr. Biden and his advisers have insisted that the United States plans to confront China on human rights abuses in Xinjiang.

A spokeswoman for the National Security Council said that the draconian treatment of Uyghurs “cannot be ignored,” and that the administration was “studying ways to effectively ensure that we are not importing products made from forced labor,” including solar products.

a pledge of 236 companies to oppose forced labor and encouraged companies to sever any ties with Xinjiang by June.

Some Chinese companies have responded by reshuffling their supply chains, funneling polysilicon and other solar products they manufacture outside Xinjiang to American buyers, and then directing their Xinjiang-made products to China and other markets.

Analysts say this kind of reorganization is, in theory, feasible. About 35 percent of the world’s polysilicon comes from regions in China other than Xinjiang, while the United States and the European Union together make up around 30 percent of global solar panel demand, according to Johannes Bernreuter, a polysilicon market analyst at Bernreuter Research.

John Smirnow, the general counsel for the Solar Energy Industries Association, said most solar companies were already well on their way toward extricating supply chains from Xinjiang.

also been reported in Chinese facilities outside Xinjiang where Uyghurs and other minorities have been transferred to work. And restrictions on products from Xinjiang could spread to markets including Canada, Britain and Australia, which are debating new rules and guidelines.

Human rights advocates have argued that allowing Chinese companies to cleave their supply chains to serve American and non-American buyers may do little to improve conditions in Xinjiang and have pressed the Biden administration for stronger action.

“The message has to be clear to the Chinese government that this economic model is not going to be supported by governments or businesses,” said Cathy Feingold, the director of the A.F.L.-C.I.O.’s International Department.

Chinese companies are also facing pressure from Beijing not to accede to American demands, since that could be seen as a tacit criticism of the government’s activities in Xinjiang.

“It is widely known that the ‘forced labor’ issue is in its entirety the lie of the century that the United States and certain other Western countries have concocted from nothing,” they said.

mothballed a new $1.2 billion facility in Tennessee in 2014, while REC Silicon shut its polysilicon facility in Washington in 2019.

China has promised to carry out large purchases of American polysilicon as part of a trade deal signed last year, but those transactions have not materialized.

In the near term, tensions over Xinjiang could be a boon for the few remaining U.S. suppliers. Ms. Sullivan said some small U.S. solar developers had reached out to REC Silicon in recent months to inquire about non-Chinese products.

But American companies need the promise of reliable, long-term orders to scale up, she said, adding that when she explains the limited supply of solar products that do not touch China, people become “visibly ill.”

“This is the big lesson,” Ms. Sullivan added. “You become dependent on China, and what does it mean? We have to swallow our values in order to do solar.”

At this point in your life, chances are good you've mastered basic potty training skills. But there's one golden rule we don't all follow in the … END_OF_DOCUMENT_TOKEN_TO_BE_REPLACED