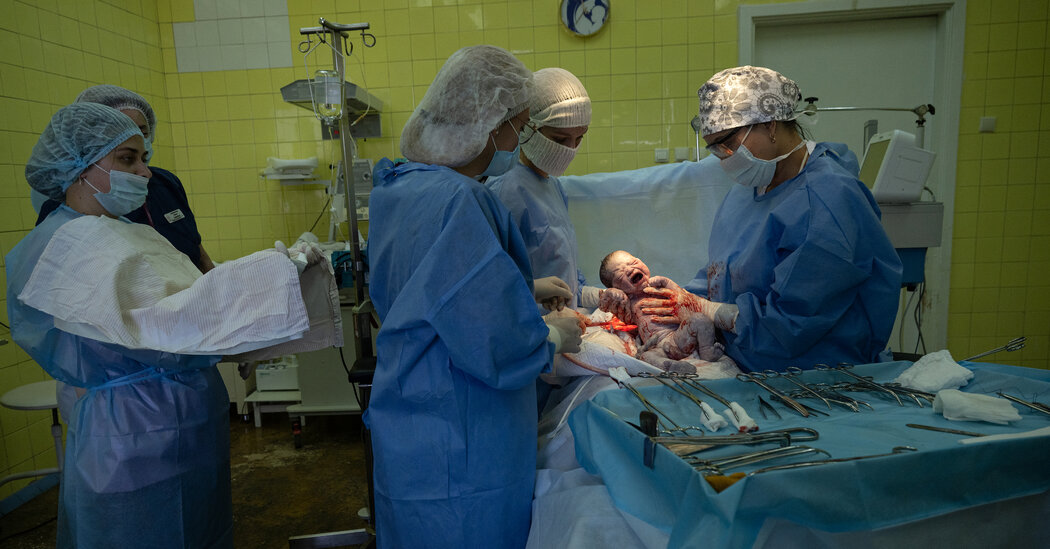 KYIV, Ukraine — After months huddled in a basement to escape shelling, a surrogate mother named Viktoria was able to get her family, and the unborn child she carried for foreign clients, away from the fighting in northeastern Ukraine.

She could do so, she said, because her employer, a surrogacy agency, had offered financial aid and an apartment in the capital, Kyiv, to ensure her safety and the baby’s. And although she had initially been reluctant to leave her home, Kharkiv, even under artillery attacks, she is now glad to live in relative security.

“I would not have left if the clinic had not persuaded me,” she said.

Viktoria is one of hundreds of surrogate mothers who have brought pregnancies to term over seven harrowing months, running for safety as air-raid sirens sounded, surviving in bomb shelters, then fleeing from ruined towns to deliver children for parents abroad.

Before Russia invaded in February, Ukraine was a major provider of surrogacy, one of the few countries that allows it for foreign clients. After a pause in the spring, surrogacy agencies are resuming their work, reviving an industry that many childless people rely on but that critics have called exploitative and that, in peacetime, was already ethically and logistically complex.

the business would unravel — especially as Russia tried and failed to seize Kyiv in the war’s early weeks — have proved overblown. Life in western and central Ukraine has largely stabilized despite fighting in southern and eastern regions and the continued risks of long-range missile strikes.

“We did not lose a single one,” said Ihor Pechenoha, the medical director at BioTexCom, Ukraine’s largest surrogacy agency and clinic. “We managed to bring all our surrogate mothers out from under occupation and shelling.”

marooned in a basement nursery in Kyiv. For weeks and months, it was difficult or impossible for biological parents to reach their children in Ukraine, but by August, all of the babies had gone home.

The war has not diminished the appeal of surrogacy for couples desperate to have children, said Albert Tochylovsky, the director of BioTexCom. “They are in a hurry,” he said. “To explain, ‘We have a war going on,’ doesn’t work.”

Before Russia launched its full-scale invasion, BioTexCom was impregnating about 50 women per month. Since the beginning of June, the company has begun at least 15 new pregnancies.

With the money that the business brings in, Mr. Tochylovsky said, surrogate mothers have been moved from frontline towns and Russia-occupied regions to safer places, like Kyiv.

criticism that it leaves poor women vulnerable to exploitation by clients and agencies. Advocates of gestational surrogacy, in which surrogate mothers undergo in vitro fertilization to deliver the babies of clients who cannot have children on their own, say the practice is invaluable to such couples and offers a potentially life-changing sum for surrogates.

“I do it for money, but why not?” said Olha, 28, who started a new surrogate pregnancy this summer. “I have good health and can help people who have money” and want children, she added.

Before the war, the business thrived in Ukraine, where surrogate mothers typically earn about $20,000 per child they deliver. The war has made financial security even more urgent.

One 30-year-old surrogate mother, who spoke on the condition of anonymity because she had evacuated from Melitopol in Russia-occupied southern Ukraine and feared she could be targeted for reprisal, said she credited the job with getting her family out. “With the help of surrogacy,” she said, “I saved my family.”

many new quandaries for the women, clients and medical personnel. Viktoria and her family face one such dilemma: Her payment will help them survive, but it is far from clear where they should go after her recovery from a C-section. The family has remained in the apartment rented by the clinic in Kyiv; her hometown, Kharkiv, is still hit by regular shelling.

For many surrogate mothers, the question was about where to deliver. Threats included not just fighting, but how the authorities established by the Russian occupation government would handle a surrogate birth.

A surrogate named Nadia lived in a village in Russia-occupied territory that was not at risk of artillery shelling. But she decided to evacuate to Ukrainian-controlled territory to deliver the baby, lest the biological parents be deprived of custody, and she lose the fee.

She spent two days with her husband and 11-year-old daughter sleeping in a car on a roadside that is sometimes shelled, waiting to cross the front line.

Ms. Burkovska, the small-agency owner, went into the war with two stranded surrogate babies in her care. In contrast to most surrogacy agencies, she cares for newborns in her own home before biological parents pick them up. For a time, she had to shelter in a basement with the newborns, her partner and her own children.

As more babies arrived in the first months of war, she wound up with seven newborns whose biological parents could not immediately retrieve them, as travel to wartime Ukraine became difficult and as some remaining coronavirus restrictions, like China’s, caused delays.

Ms. Burkovska’s own children helped care for the infants until their parents could get them. By August, most of the parents had arrived to pick up their children.

A Chinese client with BioTexCom, Zhang Zong, was one of those who struggled to reach Kyiv through travel delays. He said the wait had been excruciating. “I was very worried because of the war,” he said.

Meeting his 6-month-old son, he said, was both thrilling and a little strange. “I was extremely excited when they let me hug him,” Mr. Zhang said. “He has been here for a long time and everyone hugs him, everyone likes him, and I am not so special.”

But he added that was only for now. “When he grows up,” Mr. Zhang said, “I can tell him this story.”

AUSTIN, Texas--(BUSINESS WIRE)--As the first multifamily management company to be recognized in the Public Relations and Marketing Excellence Awards, … END_OF_DOCUMENT_TOKEN_TO_BE_REPLACED

There have been whispers of cooling housing and rental prices in the San Francisco Bay Area, but that hasn't yet translated into practical, noticeable … END_OF_DOCUMENT_TOKEN_TO_BE_REPLACED

Cars pass in Independence Square at twilight in Kyiv, Ukraine, Monday, Oct. 31, 2022. Rolling ... [+] blackouts are increasing across Ukraine as the … END_OF_DOCUMENT_TOKEN_TO_BE_REPLACED