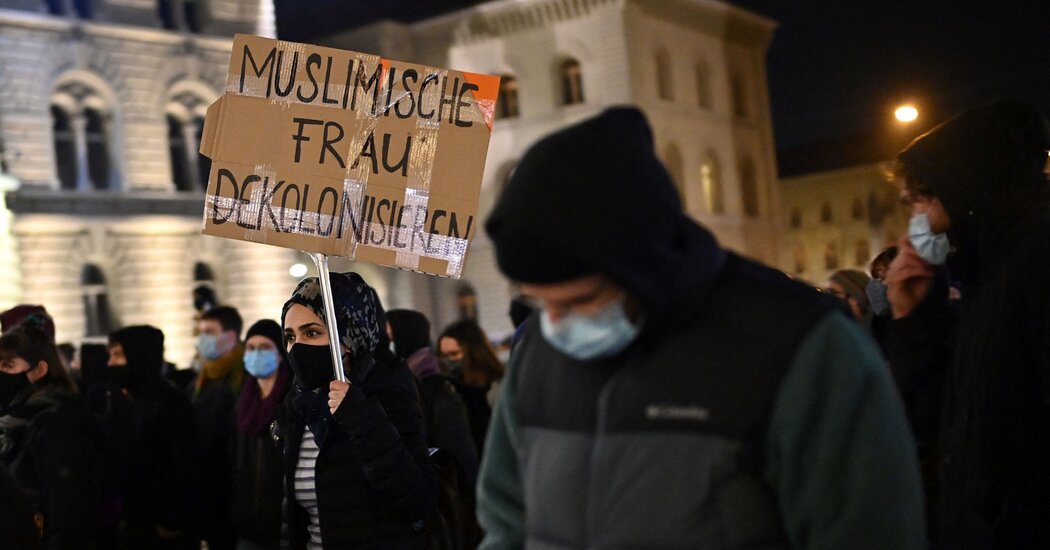 GENEVA — Switzerland on Sunday became the latest European country to ban the wearing of face coverings in public places, prohibiting the veils worn by Muslim women.

Official results of the nationwide referendum showed 51.2 percent of voters supported the ban on full facial coverings, which was proposed by the populist, anti-immigrant Swiss People’s Party (S.V.P.), compared with 48.8 percent opposing it, a much narrower margin of victory than pollsters had initially predicted.

The initiative, started long before the onset of the coronavirus pandemic, makes exceptions for facial coverings worn at religious sites and for security or health purposes, but also bans coverings like the ski masks worn by protesters. Officials have two years to write legislation to put the ban into effect.

The federal government had urged voters to reject the ban as tackling a problem that didn’t exist and arguing that it would damage tourism.

Critics of the ban cited a study showing only some 30 women in Switzerland wear the veils and most of them were born in Switzerland and had converted to Islam. The only people seen wearing the burqa, a full head-to-toe covering, are visitors from the Middle East, mostly wealthy tourists from the Persian Gulf bringing welcome revenue to the country’s hospitality industry.

France, Denmark, the Netherlands and Austria ban face coverings, and opinion polls at the start of the year showed the Swiss initiative garnering the backing of around 65 percent of voters, but the gap narrowed quickly as liberals and women’s groups pushed back against a ban they condemned as racist, Islamophobic and sexist.

The Swiss People’s Party has “always profited from campaigning against minorities, and feel they have to keep doing it,” said Elena Michel, a manager of a campaign against the ban for Operation Libero, an activist group supporting liberal causes. “In the end all our freedoms are at stake. If we open that door, it shows a tendency that it’s OK to take away the fundamental rights of minorities.”

Switzerland’s Central Council of Muslims called the result of the vote “a dark day” for Muslims and issued a statement saying, “Today’s decision opens old wounds, further expands the principle of legal inequality, and sends a clear signal of exclusion to the Muslim minority.”

The proposal put forward by the Swiss People’s Party, the country’s largest, did not mention Islam or niqabs and burqas — veils traditionally worn by Muslim women — calling instead for a ban on “full facial covering.” But the party left no doubt as to whom it was targeting.

The initiative evoked memories of a successful 2009 campaign by the S.V.P. to ban the construction of minarets, the towers from which mosques traditionally broadcast the call to prayers. Switzerland had three minarets at the time but the party challenged such architecture as alien to the Alpine nation’s culture and landscape, and hammered home the message with posters depicting minarets as missiles.

The S.V.P. framed its campaign leading up to Sunday’s vote as part of a “war of civilizations” in which it was defending Switzerland against “the Islamization of Europe and our country.”

To win support from other parts of the political spectrum, the party also framed the initiative as liberating women from religious oppression and said it would help the police deal with hooligans in street protests and at sporting events.

Some liberal-leaning Muslims supported the ban.

“What the full veil represents is unacceptable; it is the cancellation of women from public space,” Saïda Keller-Messahli, president of the Forum for a Progressive Islam, told Swiss media.

Social commentators say Switzerland’s 400,000 Muslims, who make up around 5.5 percent of the population, are better integrated than those in France or Germany.

Some who campaigned against the ban called the outcome better than expected.

“We lost the battle but not the war,” said Ines el-Shikh, a Muslim and co-founder of the Violet Scarves, a feminist group, who celebrated the sharp drop in support for the ban. “This is huge. It shows the power that feminism as an organized movement can bring to public debate.”

Others said they feared the outcome would merely stoke the politics of division and fuel anti-Muslim sentiment.

“Things are going in a bad direction and this is going to make them worse,” Sanija Ameti, a political activist and member of the Green Liberals Party, said. “That frightens me.”

MIAMI — The morning after Hurricane Ian slammed into Florida, Gov. Ron DeSantis shared the podium at his news briefing with two people: his emergency … END_OF_DOCUMENT_TOKEN_TO_BE_REPLACED

SHERMAN OAKS, Calif.--(BUSINESS WIRE)--When it comes to choosing a property management company, the size of a company often becomes a sticking point … END_OF_DOCUMENT_TOKEN_TO_BE_REPLACED