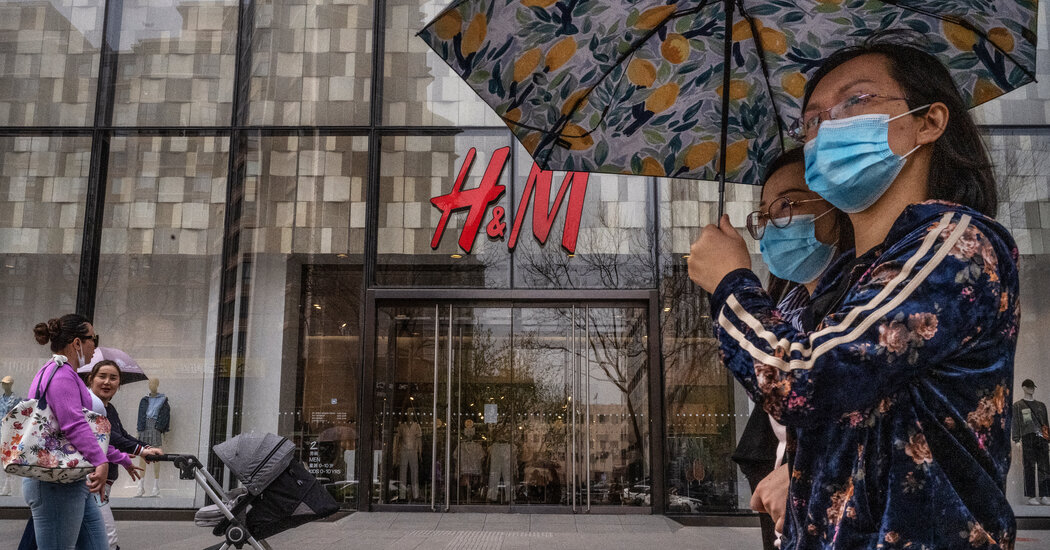 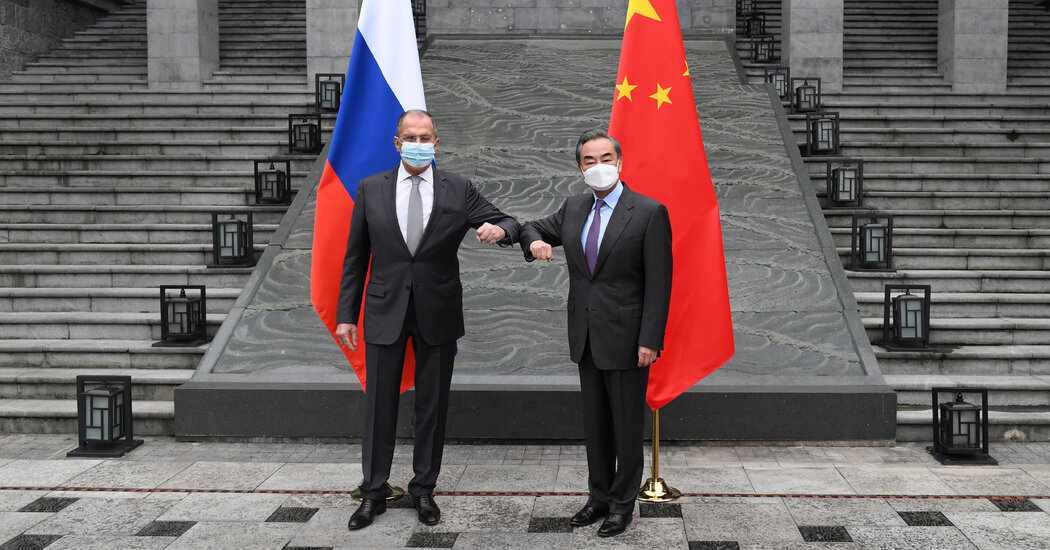 President Biden wants to forge an “alliance of democracies.” China wants to make clear that it has alliances of its own.

Only days after a rancorous encounter with American officials in Alaska, China’s foreign minister joined his Russian counterpart last week to denounce Western meddling and sanctions.

He then headed to the Middle East to visit traditional American allies, including Saudi Arabia and Turkey, as well as Iran, where he signed a sweeping investment agreement on Saturday. China’s leader, Xi Jinping, reached out to Colombia one day and pledged support for North Korea on another.

Although officials denied the timing was intentional, the message clearly was. China hopes to position itself as the main challenger to an international order, led by the United States, that is generally guided by principles of democracy, respect for human rights and adherence to rule of law.

John Delury, a professor of Chinese studies at Yonsei University in Seoul, said of China’s strategy.

As result, the world is increasingly dividing into distinct if not purely ideological camps, with both China and the United States hoping to lure supporters.

geopolitical competition between models of governance. He compared Mr. Xi to the Russian president, Vladimir V. Putin, “who thinks that autocracy is the wave of the future and democracy can’t function” in “an ever-complex world.”

He later called the challenge “a battle between the utility of democracies in the 21st century and autocracies.”

quashing of dissent in Hong Kong, from Saudi Arabia’s crown prince, Mohammed bin Salman, though a Saudi statement did not mention Xinjiang.

China’s most striking alignment is with Russia, where Mr. Putin has long complained about American hegemony and its use — abuse, in his view — of the global financial system as an instrument of foreign policy.

The Russian foreign minister arrived in China last Monday railing about American sanctions and saying the world needed to reduce its reliance on the U.S. dollar.

China and Russia have drawn closer especially since Mr. Putin’s annexation of Crimea in 2014 was met with international outrage and Western penalties. While the possibility of a formal alliance remains remote, the countries’ diplomatic and economic ties have deepened in common cause against the United States. So have strategic ties. The People’s Liberation Army and the Russian military now routinely hold exercises together and have twice conducted joint air patrols along Japan’s coast, most recently in December.

The two countries announced this month that they would build a research station on the moon together, setting the stage for competing space programs, one led by China and the other by the United States.

“The latest steps and gestures by the Biden administration, seen as hostile and insulting by the Russian and Chinese leaders, have predictably pushed Moscow and Beijing even deeper into a mutual embrace,” said Artyom Lukin, a professor of international studies at the Far Eastern Federal University in Vladivostok, Russia.

report on human rights in the United States on Wednesday, using as an epigraph George Floyd’s plea to the police, “I can’t breathe.”

“The United States should lower the tone of democracy and human rights and talk more about cooperation in global affairs,” Yuan Peng, president of the China Institutes of Contemporary International Relations, a government think tank, wrote the same day.

From that perspective, Mr. Xi’s outreach to North Korea and Mr. Wang’s visit to Iran could signal China’s interest in working with the United States to resolve disputes over those two countries’ nuclear programs.

Mr. Biden’s administration may be open to that. After the Alaska meetings, Secretary of State Antony J. Blinken mentioned both as potential areas where “our interests intersect” with China’s.

sealed trade and investment agreements, including one with the European Union, hoping to box out Mr. Biden.

“The era when it was possible to make up a story and concoct lies to wantonly meddle in Chinese domestic affairs is past and will not come back,” Mr. Wang said.

China retaliated with sanctions of its own against elected officials and scholars in the European Union and Britain. Similar penalties followed Saturday on Canadians and Americans, including top officials at the United States Commission on International Religious Freedom, a government body that held a hearing this month on forced labor in Xinjiang. All affected will be barred from traveling to China or conducting business with Chinese companies or individuals.

Theresa Fallon, director of the Center for Russia Europe Asia Studies in Brussels, said China’s sanctions on Europeans were an overreaction that would drive officials into an anti-China camp.

They could also jeopardize China’s investment deal with the European Union, as many of those penalized are members of the European Parliament, whose approval is required. So could new campaigns by Chinese consumers against major Western brands like H & M and Nike.

Until now, many European Union nations have not wanted to explicitly choose sides, eschewing the kind of bipolar ideological divisions seen during the Cold War, in part because of deepening economic ties with China.

With each new twist in relations, however, clearer camps are emerging. “The Chinese mirror all the time,” Ms. Fallon said. “They always accuse people of Cold War thinking because I think that’s really, deep down, how they think.” 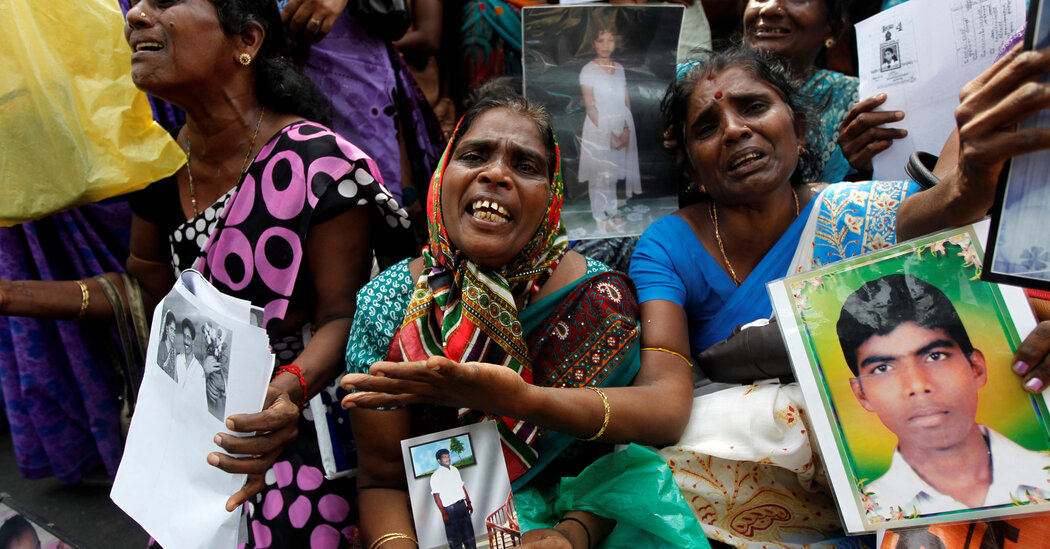 GENEVA — Responding to a decades-long push for accountability in the Sri Lankan civil war, the United Nations will set up a team of investigators to collect evidence of atrocities and abuses, amid deepening concern over the government’s backsliding on human rights.

The Human Rights Council in Geneva voted decisively to support a resolution led by Britain and Canada that provides funding for a team to collect and analyze evidence of abuses and also to “develop possible strategies” for pursuing prosecutions of the perpetrators.

The resolution is the latest effort to push for accountability for atrocities committed by a guerrilla group, the Tamil Tigers, and by the security forces during the 30-year civil war. In January, a report released by the U.N. human rights chief, Michelle Bachelet, urged “international action to ensure justice for international crimes” committed in the country.

The vote Tuesday was a diplomatic setback for President Gotabaya Rajapaksa of Sri Lanka.

His government had lobbied foreign governments intensively in recent months to try to block support for the initiative. It also resorted to heavy-handed intimidation of human rights groups at home and even surveillance of diplomats trying to engage with them.

The foreign minister of Sri Lanka, Dinesh Gunawardena, condemned the resolution as an effort by Western countries “to dominate the global south.”

Sri Lanka’s previous government had committed to investigate atrocities and set up a court with international support to prosecute perpetrators. It was part of a move toward accountability and reconciliation intended to defuse ethnic tensions and reduce the risk of further violence.

But that process quickly came to a halt after the 2019 election of Mr. Rajapakse, who had been defense minister in the bloody closing stages of the civil war, when the U.N. has estimated thousands of civilians died in indiscriminate shelling by the military.

The Human Rights Council resolution passed Tuesday also drew attention to a deterioration over the past year in Sri Lanka, citing harassment and intimidation of rights groups, increasing militarization of the government, weakening independence of the judiciary, restrictions on the media, and reports of torture by security forces.

“The world has sent a message to Sri Lanka’s rulers, that they cannot escape accountability for international crimes,” John Fisher, the Geneva director for Human Rights Watch, said in a statement, “and they should step back now from escalating ongoing abuses.”

The vote by the 47-member council to establish the inquiry was 22 to 11, with 14 abstentions.

The initiative follows, if on a more modest scale, earlier ones that are assembling evidence of crimes against humanity in Syria and Myanmar that could support prosecution by an international tribunal or on the basis of universal jurisdiction.

When Graham Brooks received his ballot in early February, asking whether he wanted to form a union at the Amazon warehouse in Alabama where he works, … END_OF_DOCUMENT_TOKEN_TO_BE_REPLACED