An informal network that includes former government and military officials is working around the clock to fulfill a pledge to save Afghans who put their lives on the line for America.

FREDERICKSBURG, Va. — Rex Sappenfield does not sleep well. A former Marine who served in Afghanistan, he is tormented by the fate of his interpreter, an Afghan with a wife and three young children to whom Mr. Sappenfield made a battlefield promise: We will never abandon you.

Now a high school English teacher who tries to instill a sense of rectitude in his students, Mr. Sappenfield has thought about his pledge every day since the United States pulled out of Afghanistan on Aug. 30.

“We broke a promise, and I just feel terrible,” Mr. Sappenfield, 53, said. “I said it to the faces of our Afghan brothers: ‘Hey guys, you can count on us, you will get to come to the United States if you wish.’”

But if America has withdrawn from Afghanistan, Mr. Sappenfield and many other veterans have not. He is part of an informal network — including the retired general who once commanded his unit, retired diplomats and intelligence officers and a former math teacher in rural Virginia — still working to fulfill a promise and save the Afghan colleagues who risked their lives for America’s long fight in Afghanistan.

“I tell my students in 11th grade that they are the only ones who can betray their integrity,” Mr. Sappenfield said. “It’s theirs to give away if they choose to lie or cheat. But in this case, someone else broke my word for me. It just irritates the heck out of me.”

If Not Me, Then Who?

Did our service matter?

The question gnawed at Lt. Gen. Lawrence Nicholson as he drafted a letter in August to the men and women with the 2nd Marine Expeditionary Brigade who fought alongside him in Afghanistan. “Nothing,” he wrote, “can diminish your selfless service to our nation.”

Nothing — not the Taliban’s sweeping takeover after two decades of war, not the desperate Afghans falling from planes, not disbelief that Afghanistan had fallen overnight to the same enemy that the Americans had vanquished 20 years ago.

“I felt I had to say to the guys, ‘Hey, get your heads up,’” said General Nicholson, who retired as a three-star in 2018. Recalling the 92 Marines who died under his command in Helmand Province, the 2,461 American service members overall who died in Afghanistan and the untold treasure lost, he wrote to his fellow Marines:

the fall of Kabul on Aug. 15, the network worked with soldiers and intelligence officers on the ground in Afghanistan. She showed The Times a list of Afghan names, including large families, a few marked in purple with the words “GOT OUT!!!”

“Among Americans there is no shared scar tissue from the wars,” said J. Kael Weston, a retired foreign service officer who served in Iraq and Afghanistan alongside General Nicholson and has been part of the network. “A culture gap opened up.”

In rural Virginia, Ms. Hemp and others are still working to save more Afghans. She has three young grandchildren and doesn’t have to do this, given that many Americans have already forgotten Afghanistan, or scarcely paid attention to it before.

“I was raised with the Golden Rule, an honor code,” she said. “You do not lie to people. You honor your promises.”

On many days, Mr. Sappenfield speaks on Zoom with P, the interpreter. They exchange videos of their children but more often they talk about fear and frustration. The fear is about the Taliban. The frustration is with the State Department, which has been slow walking his visa application for many years.

“They are not taking any action,” P said in a Zoom call. “I feel hopeless. I feel I will be killed in front of my kids.”

For more than a decade, P has been caught in the Catch-22 labyrinth of the State Department’s Special Immigrant Visa, or SIV, application process. He has already had two visa interviews — on March 3, 2020, and April 6 of this year — at the now closed U.S. Embassy in Kabul.

Yet in a Sept. 21 email to Ms. Hemp, a foreign service officer wrote that P still needed another interview. “Obviously,” the officer added, “that will not be happening in Kabul.”

He concluded, “Sorry this is so murky and chaotic.”

Ms. Hemp responded bluntly. “In this day and age of online meetings, zoom conference calls, FaceTime calls, Messenger video chat, why can’t they do an online interview?” she wrote.

The foreign service officer checked with a colleague in Washington, who confirmed that, given the closure of the embassy in Kabul, there was no way for P to get another interview unless he managed to leave Afghanistan.

“Then the SIV case can be transferred to that country,” the officer wrote. “So, it seems to be a Catch-22 situation.”

Alejandro N. Mayorkas, the homeland security secretary, said on Capitol Hill last month that only about 3 percent of the Afghans evacuated to the United States during the American withdrawal actually have special immigrant visas.

P’s application was first submitted in April 2010, when Mr. Sappenfield’s unit was rotating out of Helmand. Had the process not been so labyrinthine, P would have gotten out of Afghanistan before it fell to the Taliban. Now he is trapped.

In an email, a State Department spokeswoman said the effort to help people like P was “of utmost importance” but acknowledged that “it is currently extremely difficult for Afghans to obtain a visa to a third country” in order to have a visa interview.

P has not given up. Every day there is a different word on flights. So far, none have had a spot for him.

Ms. Hemp, Mr. Sappenfield, Mr. Britton and General Nicholson haven’t given up, either.

“Since the weather is changing, people are asking me to find blankets and warm clothes for their families in Afghanistan,” Ms. Hemp wrote recently. “Of course, they continue to ask when their loved ones will be evacuated. No clue, probably never, but I don’t dare tell them that.”

Mr. Sappenfield, a religious man, also recently wrote: “Haunted by the promises I made but my government wouldn’t allow me to keep, I ponder my own Judgment Day.

“Irreverently, perhaps, I am hoping for a front row seat when that day of reckoning comes for those responsible for these crimes against humanity.” 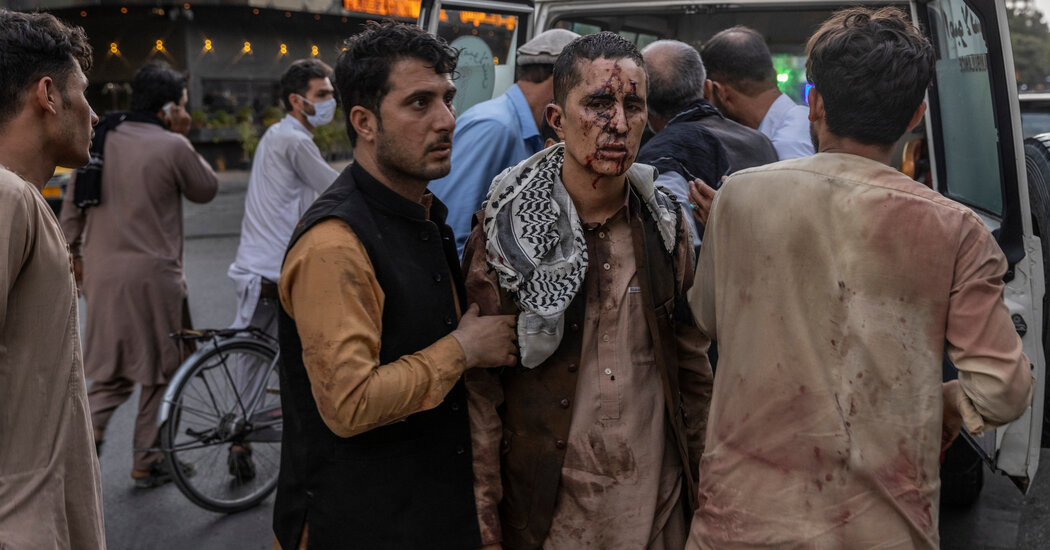 KABUL, Afghanistan — Two explosions killed dozens of people, including at least 13 U.S. troops, ripping through the crowds outside Afghanistan’s main airport on Thursday, just hours after Western governments had warned of an imminent Islamic State attack and told their people to stay away from the airport.

The attack, by at least two suicide bombers, struck at the only avenue of escape for the thousands of foreign nationals and tens — or hundreds — of thousands of their Afghan allies who are trying to flee the country following the Taliban takeover and ahead of the final withdrawal of U.S. troops, set for next Tuesday.

Afghan health officials gave varying estimates of the toll at the international airport in Kabul, the capital — from at least 30 dead to more than 60, and from 120 wounded to 140 — while a Taliban spokesman cited at least 13 civilians killed and 60 wounded.

The Islamic State claimed responsibility for the attacks on behalf of its loyalists in Afghanistan.

General McKenzie said it appeared that a suicide bomber, most likely wearing a concealed explosives vest, had made it through the checkpoints outside the airport, many of them run by Taliban soldiers, who are supposed to detect such attackers. He said he had no reason to believe that the Taliban, who are eager for the Americans to leave as quickly as possible, knowingly let the bomber through.

The chief Taliban spokesman, however, made a point of saying that the attack took place in an area where American forces controlled security.

The explosion hit at the airport gate, where U.S. troops screen people who are trying to get in. Gunfire followed, but it was not clear who was shooting. The general said American forces will work with the Taliban to keep crowds farther back from the airport gates, and to close some roads to thwart vehicle attacks.

“This is close-up war — the breath of the person you are searching is upon you,” General McKenzie said, adding, “I cannot tell you how impressed I am with the heroism” of the service members doing that perilous work.

“If we can find who’s associated with this, we will go after them,” he said.

Mr. Biden vowed, “we will respond with force and precision at our time” against the Islamic State leaders who ordered the attack. He added, “We have some reason to believe we know who they are.”

U.S. Marines at Abbey Gate had been working tirelessly for days, well aware that their time to help Afghans and U.S. citizens flee the country was running short as the Aug. 31 withdrawal date drew near. Ten of them were among the dead.

The State Department had identified about 6,000 Americans who were in Afghanistan on Aug. 14, the day before the Taliban began entering Kabul and the U.S.-backed president, Ashraf Ghani, fled the country. On Wednesday, the department said that figure was down to 1,500 and it was trying frantically to reach them all, telling them to get to the airport or sending helicopters to extract them.

But then the intelligence on an impending attack prompted the United States and NATO allies to tell people overnight not to approach the airport. Even so, by Thursday afternoon, the State Department said, about 500 more Americans had left the country, and hundreds more were awaiting evacuation, while some U.S. citizens had signaled that they do not intend to leave.

Early Friday morning, alarmed Kabul residents reported another series of explosions near the airport, setting off fears of another bombing attack. Taliban officials and Afghan journalists soon reported otherwise: It was the Americans, they said, destroying their own equipment as they prepared to leave Afghanistan.

About an hour outside of the capital city of San Juan, the sumptuous spread known as Hacienda Illusion is now on the market for $48 million. For a … END_OF_DOCUMENT_TOKEN_TO_BE_REPLACED

Kids at Hilton Aruba play with the resident birds. Hilton Aruba As summer nears, hotels around the world are making big changes and refreshing their … END_OF_DOCUMENT_TOKEN_TO_BE_REPLACED

In 1789, before the slave rebellion, the marquis bought 21 recently kidnapped Africans before leaving for France. But he didn’t indicate where they … END_OF_DOCUMENT_TOKEN_TO_BE_REPLACED