The Senate on Wednesday confirmed Marcia Fudge to head the Department of Housing and Urban Development and Michael Regan to lead the Environmental Protection Agency, picking up the pace for confirmations in Joe Biden’s cabinet. 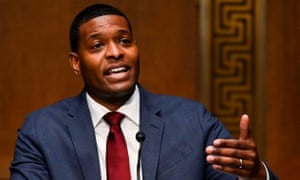 Fudge, who has represented parts of Cleveland and Akron in the House since 2008, is a former mayor and a longtime advocate for assistance for the needy. She said at her confirmation hearing in January that her first priority would be protecting the millions of people who have fallen behind on rent or mortgages due to loss of income during the pandemic, telling senators that “we cannot afford to allow people in the midst of a pandemic to be put in the streets”.

Shortly after she was confirmed, Fudge took the last vote of her House career in support of the $1.9tn Covid-19 relief bill, which will provide billions in housing assistance to low-income households.

Democrats argued that Fudge’s experience was right for the times. Senate Banking, Housing and Urban Affairs Committee Chairman Sherrod Brown, an Ohio Democrat who lives in Fudge’s district, noted that Ohio suffered a disproportionate number of foreclosures even before the 2008 economic crisis.

“She knows how for decades, communities have watched as factories closed, investment dried up and storefronts were boarded over,” Brown said. “And she knows how many neighborhoods and towns have never had the investment they should – because of discrimination, because of redlining, because of decades of policy that funneled resources and jobs away from Black and brown communities.”

The Senate majority leader, Chuck Schumer, said Fudge “has a difficult job ahead of her” as millions of American renters are behind on payments and millions of homeowners are in forbearance.

The Covid-19 relief bill provides about $30bn to help low-income households and the unemployed afford rent and utilities, and to assist the homeless with vouchers and other support. States and tribes would receive an additional $10bn for homeowners struggling with mortgage payments because of the pandemic.

Regan is known in his home state for pursuing cleanups of industrial toxins and helping low-income and minority communities significantly affected by pollution.

Senator Tom Carper, who is the chairman of the environment panel, said Regan has a proven record of forging “practical solutions to clean our air and our water, while building a more nurturing environment for job creation and job preservation”.

One of Regan’s biggest challenges will be returning scientific integrity to an agency that, under former president Donald Trump, frequently allowed business groups and other special interests to “play a large role in crafting the agency’s policies”, Carper said.

The confirmations were not without criticism from Republicans. West Virginia senator Shelley Moore Capito, the top Republican on the environment panel, said Regan would return the EPA to the policy agenda of the Obama administration, an agenda she said “absolutely devastated my state and other energy-producing states”.

Meanwhile, Pennsylvania senator Pat Toomey criticized some of Fudge’s past comments about Republicans, saying they could have a “toxic and detrimental impact on the working relationship that ought to be a constructive relationship” between Congress and the Biden administration.

Fudge at the time called Senate Republicans “a disgrace to this nation” and said they “have no decency, they have no honor, they have no integrity”. At her confirmation hearing, Fudge did not walk back any of her previous statements but described herself as “one of the most bipartisan members in the House of Representatives”.

“May it please the court. Ladies and gentlemen of the jury, good morning. The video evidence, I think, will be very helpful and meaningful to you … END_OF_DOCUMENT_TOKEN_TO_BE_REPLACED