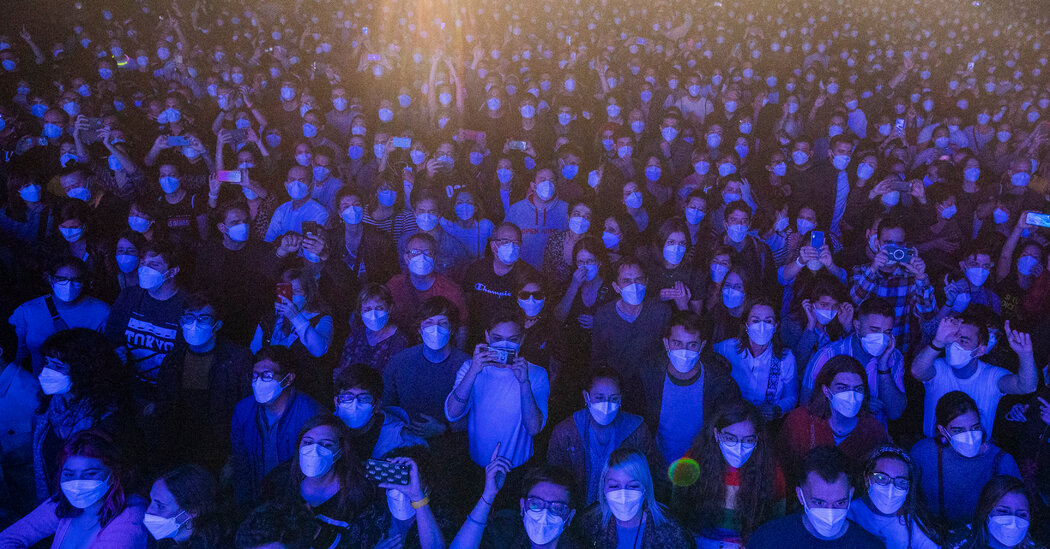 “If I had not been vaccinated already, I really would have thought twice about coming here,” said Cristina Delgado, a doctor. But Ana, her sister, who was also vaccinated because she works in health care, felt differently. “I was going to come whatever, because I want to save culture and return us to normal life,” she said.

Inés Villasuso, a 24-year old nurse, also said that “it would have been better to get everybody tested again later, to have scientific evidence that can really convince the authorities that such a big event can be held safely.” But she and her twin sister, Eva, agreed that the concert outstripped their expectations. “It felt like living a total dream,” Eva said.

In an interview before the concert, Julián Saldarriaga, a member of Love of Lesbian, said that the band’s decision to perform had received very broad support, but also generated “some criticism, from people who have called us irresponsible or who say that we only care about money.” But for his band, he said, “we really saw this as an opportunity to take part in the recovery of culture.”

Rather than featuring a supporting act, the concert was preceded by a series of videos about Covid-19, shown on the big stage screen and interspersed with hits from the distant past — like “Come Together” and “Here Comes the Sun,” by The Beatles — whose themes warmed up the crowd.

To comply with the safety protocols, on Saturday, concertgoers visited one of three smaller Barcelona music venues to get a rapid antigen test for Covid-19. The cost was included in the €23 ticket price.

Christiana Guldager, a photographer, said that she cried before her test at the Razzmatazz nightclub. “I’ve been dancing so often in that place that it made me feel very emotional to find it instead converted into a mini-hospital,” she said.

Asbestos in the home can be downright scary. This extremely dangerous material has been linked to all kinds of health problems, including … END_OF_DOCUMENT_TOKEN_TO_BE_REPLACED

ATLANTA — Before the three men convicted of murdering Ahmaud Arbery were sentenced on Monday on federal hate crime charges, they asked a judge to … END_OF_DOCUMENT_TOKEN_TO_BE_REPLACED