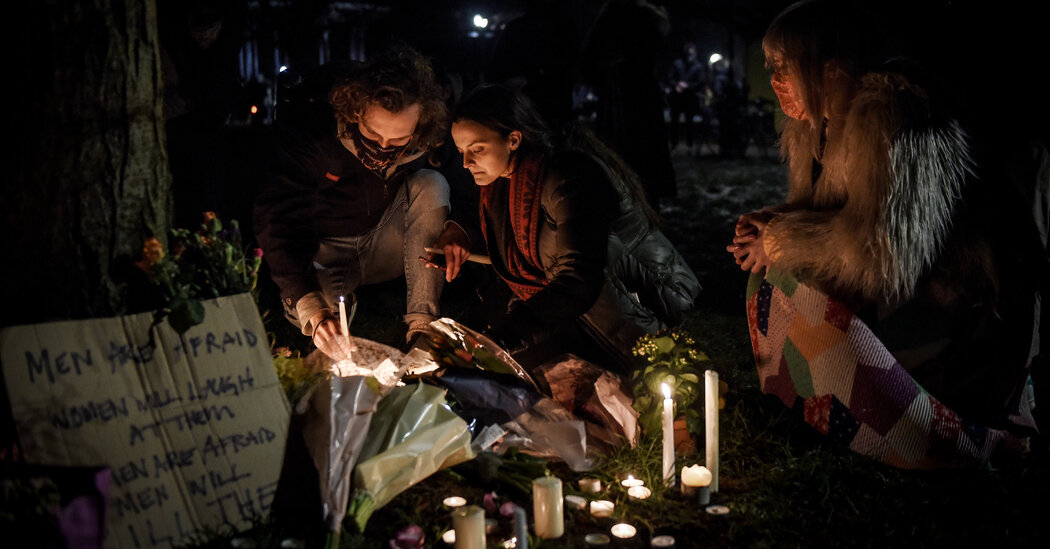 LONDON — Sarah Everard, like so many others, had a difficult year in 2020. A long-term relationship fell apart, and she lost her job when the company she worked for hit the rocks.

Still, she had stayed positive and active, throwing herself into online exercise classes and remaining a steadfast supporter to friends struggling through an equally arduous time. Lately, those friends said, things had been looking up, and she was eagerly anticipating post-pandemic life.

She was seeing someone new, and she was eager to travel again, to see family in York in northern England and to reconnect with friends. She had just started a new job.

So when Ms. Everard didn’t come home on March 3, a Wednesday night, they knew something was wrong. She had made a phone call to her new boyfriend as she walked from a friend’s house, and then she vanished. It was 9:30 p.m.

became a rallying cry for a broad movement to combat pervasive, longstanding violence against women in Britain — a symbol of all those of who have been attacked, so many of whose cases have gone largely unnoticed.

Amid the national attention, her friends and family have been left to privately mourn a woman, just 33, who had been taken far too soon. They described someone of warmth and empathy, always ready to listen to a friend’s troubles and offer support, a woman who also did not fully appreciate just how smart she was.

“She was sunshine and light, and made you feel warm and good and safe,” said Holly Morgan, who met Ms. Everard through work in London years ago. “I feel angry about it as well, but my main anger is that it happened to her.”

The news of Ms. Everard’s disappearance spread quickly online, first among friends and family — a network that stretched from her hometown near York to a web of friends from her college years and colleagues in London. They collectively worried about her, amplifying calls for information. Many desperately puzzled over how this could be happening to their Sarah.

wrote in a post last week, on International Women’s Day.

Then, as the news came that a police officer had been arrested in her death, the messages turned to memorials, and her story grew from personal pain to national reckoning. As flowers pile up at a bandstand in Clapham Common in south London, near where she disappeared, and protesters silently raise fists outside government buildings in remembrance of Ms. Everard, those closest to her are still trying to make sense of things.

For many, their friend’s transformation into a national symbol has complicated their own raw feelings of grief.

“In the uproar of what Sarah’s death is being taken to represent,” as one friend, India Rose, described it, she had struggled to find words to pay proper tribute to a woman she knew as “open, honest,” and “unflinching in her ability to listen and empathize.”

“We shared a lot, and I was never in any doubt of her discretion or sincerity in her support and kindness,” Ms. Rose said on Facebook.

where the staff remembered “how lovely she was to teach,” in a tribute posted over the weekend. Steve Lewis, the school’s head teacher, said her family and friends were a valued part of the community, and described Ms. Everard as bright, vibrant and caring.

“Her joy, intelligence and positive spirit shone within the school,” he said in a statement.

After graduating in 2005, Ms. Everard attended Durham University, where she studied geography. In a statement, Stuart Corbridge, the vice chancellor, said the community was devastated. Ms. Everard was a “popular and lively” student who retained a large group of friends after her graduation in 2008, he said.

spoke to the BBC when she first went missing, describing her as an “exceptional friend, dropping everything to be there to support her friends, whenever they need her.”

In a news release for a sports event she worked on in 2019, Ms. Everard said her organization was “determined to find as many opportunities during the event to tell the fantastic stories of pioneering women over the last century.”

On Ms. Everard’s Facebook page, photos offer glimpses of faraway travels and of London, the city she called home in recent years. In one picture were the tattered and windswept prayer flags of the Himalayas. In another was the unmistakable London skyline, the River Thames glistening in sunset. Images from an unfinished life.

She was an introvert who could still draw others close because of her rare skill for listening, but she could also be silly and irreverent, friends said. She was curious, active and adventurous, but also humble and private.

“There are those moments where it’s like love at first sight, but with a friend,” Ms. Morgan said of the first time she met Ms. Everard. “You meet a fellow woman and go, ‘I love you, and I don’t know you yet properly, but I know that I’m going to love you. And it was one of those things.”

described her on Facebook as a “smart, talented marketer” who got along with even the most difficult people she encountered.

“Sometimes you meet a person with a beautiful soul and it shines through,” she wrote.

Another former co-worker, Peter McCormack, shared a photo of a night out at an 1980s themed party with Ms. Everard. “Crap at karaoke, brilliant at everything else,” he wrote in the Facebook post.

“Our clients loved her, the team loved her, everyone loved Sarah,” he wrote. “For that moment she came into our lives, she made it better.”

Ms. Morgan said that it has been hard to comprehend the national uproar her friend’s death has caused, but the immediate outpouring of love had been heartwarming.

“Everyone has a Sarah in their life,” she said, describing the magnetism of women who are smart, determined and humble. “That’s why there’s been such an ongoing tide of pain and rage, because other people feel like they knew her, without knowing her at all.”

Asbestos in the home can be downright scary. This extremely dangerous material has been linked to all kinds of health problems, including … END_OF_DOCUMENT_TOKEN_TO_BE_REPLACED

ATLANTA — Before the three men convicted of murdering Ahmaud Arbery were sentenced on Monday on federal hate crime charges, they asked a judge to … END_OF_DOCUMENT_TOKEN_TO_BE_REPLACED