A striking lack of affordability held steady for first-time home buyers in the final quarter of 2021. After a slight uptick in listings in the third quarter, the number of homes on the market fell further into a hole to close out the year.

In last quarter’s first-time buyer analysis for Q3, we cautioned buyers against getting overly optimistic in the face of small improvements. With fourth quarter list prices up 14% nationwide over the last few years even after adjusting for inflation, and inventory depleted, an interlude of price stability with a small listings bump was unable to change the dynamics of this seller’s market.

By and large, any inventory improvements in the third quarter (up 31% across the most populous metropolitan areas) were buffered as listings fell 14% in the fourth quarter. For buyers, incremental price improvements aren’t enough to make homes affordable, and still-falling inventory only further complicates matters.

Affordability across the nation’s biggest metros

Average affordability remained stable from the third to the fourth quarter of 2021 in the nation’s largest 50 metropolitan areas. Homes were listed at 5.5 times median first-time home buyer income in these metro areas, on average, and 5.3 times across the nation as a whole.

As a reminder, home buyers have historically been advised to look at homes listed at roughly three times their income. For first-time buyers, staying within budget is particularly crucial, as they are less likely to have wiggle room in their monthly expenses. But as this analysis has shown over the past few years, the “three times your income” adage may be as outdated as dial-up internet.

The most affordable metros for first-time buyers remained in the Rust Belt and Midwest. Detroit joined this lineup, nudging out Minneapolis and Baltimore. Inaugural buyers in the fourth quarter would see their money go the furthest in Pittsburgh, where homes were listed at 2.9 times median first-time buyer income, Cleveland (3.1), St. Louis (3.3), Buffalo, New York (3.5), and Detroit (3.5).

For the first time since early 2020, the least affordable metros included one outside of California, as Miami had a similar affordability ratio to Riverside. Los Angeles, perennially at the bottom of the affordability list, found homes priced at 11.2 times first-time buyer income, compared with 12.1 last quarter. Others at this end of the list include San Diego (9.2), San Jose (8.3), Sacramento (7.7), Riverside and Miami, both 7.6.

First-time buyer guidance: Even more important than adhering to a generalized guideline is understanding your personal financial picture and how much home is realistic, given your budget and the location you’re shopping in. Home buyers should take ample time before they begin shopping to establish their homebuying budget. This step doesn’t mean accounting for only the purchase price of your home, but also how much you’ll pay in mortgage interest — rates are already rising in 2022 — homeowners insurance, taxes, and home maintenance and upkeep, not to mention considering other financial obligations such as debt. A home affordability calculator can help with this process.

After a tiny bump, inventory falls again in Q4

The number of monthly active listings on the market in the nation’s largest metros fell 14% from last quarter. This drop came on the heels of a hint of relief, as listings rose 31% from Q2 to Q3. But that relief was modest, at best, and — as we see now — temporary. Nationally, listings fell 9% from last quarter. The chart below shows just how deep in a housing shortage we are. It would take many quarters of considerable growth to get inventory back to pre-pandemic levels. 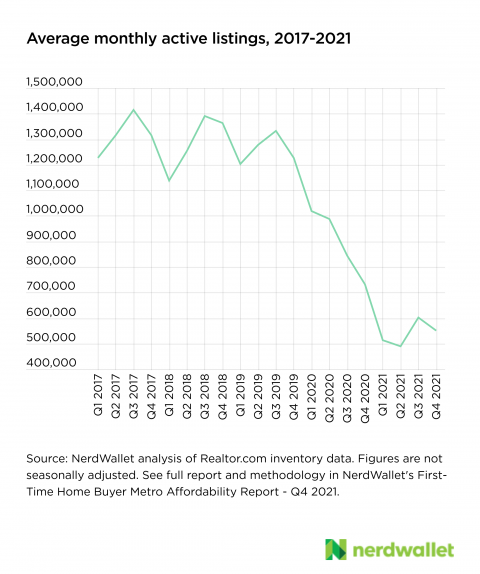 Some of the most unaffordable markets saw the biggest drops in average monthly inventory. Sellers in these locations may be apprehensive about listing, knowing they’d find themselves on the buyer’s side in a pricey and unfavorable market. In San Diego, average monthly listings fell 48% in the fourth quarter, along with 39% in San Jose and 37% in Los Angeles. In all, eight metros saw inventory fall 20% or more quarter over quarter.

Nationally, listings fell 25% compared with the fourth quarter of 2020. And year-over-year decreases were even more dramatic in a handful of metros. In Hartford, Connecticut, active listings fell 60% year over year; in Miami, they fell by 51%; and in Raleigh, North Carolina, the number of homes on the market fell by half.

First-time buyer guidance: Shopping for a home when there are so few available makes the purchasing process even more complex. Your budget isn’t all that you need to be concerned about; your wish list and desired location may carry just as much weight. If you can be flexible about these things, you’re better suited to buying in the current market, where listings are scant.

However, if you’re fully committed to a specific type of home in a certain neighborhood, you may have better luck waiting for it to hit the market than chasing homes that won’t delight you. In this case, let an agent know exactly what you’re looking for so they can tip you off if they see a listing that checks your boxes. This approach takes some inevitable disappointment off the table, as you’re less likely to waste your time going to showings and open houses that just don’t fit the bill. But it does mean it will take you longer to become a homeowner.

Average prices relatively stable, but some metros stand out

As in the third quarter, prices among the nation’s largest metro areas fell 1% quarter over quarter and 2% year over year, on average, again. The seemingly endless upward climb has slowed, but these modest decreases are too small to mean that prices are on their way down. And within those averages are some pretty significant changes.

From the previous quarter, the biggest price decrease came in Detroit, where prices fell 13%. The biggest boost was seen in the New York City metro area, where prices climbed 8% over the quarter.

Typically, the fourth quarter marks a housing market slowdown, as the weather cools and the holiday season captures everyone’s attention. During this time, prices generally begin creeping down to reach their lowest points in January and February. But the current housing market is anything but typical, and seasonal patterns aren’t as dramatic or predictable as they once were.

First-time buyer guidance: Prices aren’t expected to climb as much in 2022 as they have over the past two years. However, if typical seasonal trends hold even slightly, they will rise later this spring as the weather warms. As a hopeful buyer, you shouldn’t get too optimistic when you see prices leveling in the fourth and possibly first quarters. Instead, it’s best to prepare for sustained high prices in most large markets across the country. That said, there are areas where your homebuying dollar goes further, and prices haven’t grown as much. Less populous cities and rural areas are often insulated from the steepest price increases, so if you have the flexibility to look for homes in less crowded markets, you may have better luck staying within budget.

Pittsburgh: The only ‘affordable’ metro

If finding a house three times your income is the threshold to meet, the Pittsburgh metro area holds the most promise for first-time buyers. It’s the only metro analyzed where homes were priced less than three times that city’s typical first-time buyer income in the fourth quarter. This is only the second time a metro dipped below this threshold in the history of this analysis — dating to the first quarter of 2020, before the pandemic took hold. And back then, it was Pittsburgh too.

In the fourth quarter, homes were listed at 2.9 times first-time buyer income in Steel City, at about $219,000, on average. There were about 3,800 homes on the market in any given month of the quarter, and while this is a 33% decline since the first quarter of 2020, it’s a far more modest drop than other metro areas.

AUSTIN, Texas--(BUSINESS WIRE)--As the first multifamily management company to be recognized in the Public Relations and Marketing Excellence Awards, … END_OF_DOCUMENT_TOKEN_TO_BE_REPLACED

There have been whispers of cooling housing and rental prices in the San Francisco Bay Area, but that hasn't yet translated into practical, noticeable … END_OF_DOCUMENT_TOKEN_TO_BE_REPLACED

Cars pass in Independence Square at twilight in Kyiv, Ukraine, Monday, Oct. 31, 2022. Rolling ... [+] blackouts are increasing across Ukraine as the … END_OF_DOCUMENT_TOKEN_TO_BE_REPLACED