The listing doesn’t elaborate on what kind of work was performed by the legendary architect, but his imprint is easy to see in the listing photos.

Key architectural features that are eye-catching from the curb include the porte-cochere, circular sunroom, and wide front porch.

The historic home last sold in 2010 for $1.05 million, and another round of renovations in 2012 brought it into the 21st century. The work was done by John Thorpe—an architect who also worked on a restoration of Wright’s home and studio.

Additions include a new kitchen with high-end appliances, a mudroom, as well as an extended family room featuring surround sound, hardwood flooring, automatic shades, and new windows. A new basement entry was also added, and cedar siding was installed on the back of the house.

Once home to baseball Hall of Famer Ty Cobb, this estate rests on the eastern shores of Lake Tahoe. Now, 1472 Flowers Ave. is on the market asking … END_OF_DOCUMENT_TOKEN_TO_BE_REPLACED 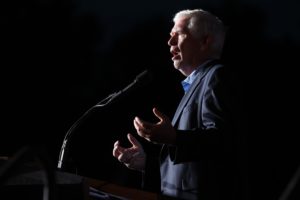