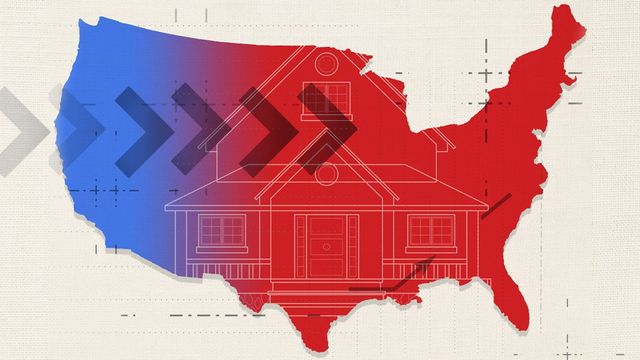 The summer temperatures are sizzling, but America’s once-hot Western real estate markets are on ice.

While the warmer months generally see a decline in homebuyers making the move to temperate Western regions, a new report by Realtor.com® reveals that westward areas are altogether missing from June’s 20 hottest real estate markets for the first time in the data’s history. (The rankings factor in a combination of demand—measured by the number of unique views per home listing—and how quickly homes are selling in that area.)

Instead, the East Coast dominates because it’s simply more affordable. In another first for the data’s annals, a new hottest market nabbed the top spot in June: Concord, NH.

This picturesque New England town saw homes linger on the market a scant 13 days before being snapped up by buyers. That’s almost a third less time than the already speedy national average of 32 days.

Concord’s hotness might be a head-scratcher at first glance. The median listing price in the state capital of New Hampshire is high—$457,000—compared with the new national average of $450,000 (which is up 16.9% from the past year).

Yet Concord’s home prices are about $20,000 less than the city it displaced for the hottest market title—Manchester, NH, which held the top spot for nine of the past 12 months.

In the past, homebuyers were drawn to Manchester due to the nearby Boston metro’s high median home prices, which spiraled to $759,000 in June.

But now, with Manchester home prices at $478,000, cash-strapped homebuyers are searching for affordable alternatives nearby. And, like Manchester, Concord is within driving distance (about an hour away) of Boston. Plus, home sellers who cashed in on Manchester’s hot streak need somewhere to go.

“What’s happening is that in-state sellers are moving,” says real estate broker Pamela Young, of Re/Max Insight, who sells homes in both Concord and Manchester. “Concord is north of Manchester, and the prices are better. You get more house for a better price.”

Young also says she has buyers flocking to New Hampshire from Tennessee, Georgia, Texas, Oklahoma, and Hawaii. Plus, both Manchester and Concord enjoy the “Live Free or Die” state’s lack of state income and sales taxes. Still, these New Hampshire–bound homebuyers will need to act fast, particularly in Concord.

“You’ll see multiple offers on a property in Concord within a week,” warns Young. “My clients made an offer on a home that had been on the market for three days—and were declined. It already had seven offers.”

Indeed, California’s fall from grace might seem sudden, given the Golden State had a whopping five metros in the top 20 hottest markets back in January. (Metros include the central city and the surrounding suburbs, towns, and smaller urban areas.)

By April, there were no California metros on the list. And now the homebuying sun hasn’t just set on California, but the entire Western region.

“When we look at the West Coast market, whether it’s Oregon, Washington, California, Arizona, or Nevada, their home prices have continued to rise even as mortgage rates jumped,” says George Ratiu, manager of economic research for Realtor.com.

Back at the beginning of this year, mortgage rates were 3.55% for a fixed-rate 30-year mortgage. That rate shot up to 5.3% for the week ending July 7, according to Freddie Mac. And still-rising mortgage rates (and home prices) might be the driving force behind the push to find a home in a decent price range.

Topeka, KN, metro area, with the lowest listing prices hovering at $225,000. While it’s the cheapest place on the list, homes still sold in 23 days.

Topeka is not only extremely affordable, it’s also in the heart of the Midwest and the state capital. The city’s unemployment rate in May, which is the latest data, was 2.5% well below the national average of 3.6%. But the Manchester-Concord dynamics are also at play in Kansas.

“When I look at who’s shopping on Realtor.com in Topeka, interestingly 25% of home shoppers are from the state, with the No. 1 viewers coming from Kansas City,” adds Ratiu.

So do homebuyers have to keep migrating from one city within a state to another to find a bargain?

“If buyers can wait a few months, they’re going to find a better market with more options and more approachable prices,” says Ratiu. “Particularly as we move into fall and winter. We’re seeing new listings hit the market in much larger numbers. … And to me, that’s really encouraging. Because that’s been the missing ingredient in the market of the last few years.”

There were no arrests in three quarters of last year’s fatal shootings, according to statistics provided by Mr. Krasner’s office, even as arrests for … END_OF_DOCUMENT_TOKEN_TO_BE_REPLACED