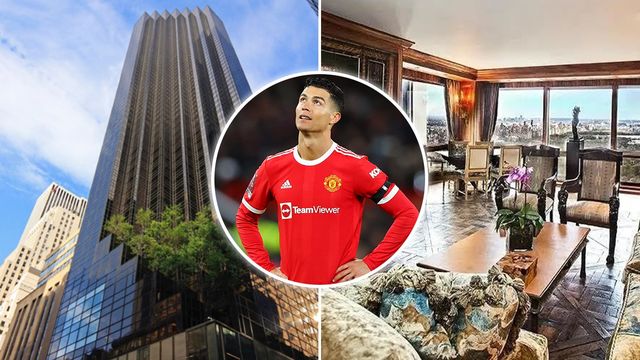 The soccer superstar Cristiano Ronaldo has had less luck in the real estate game. He recently unloaded his Trump Tower condo in Manhattan for $7.18 million, a whopping $11.32 million less than he paid in 2015.

The Manchester United forward shelled out $18.5 million for the three-bedroom, high-floor loft with Central Park views in 2015.

At the time of the transaction, rumors swirled that perhaps the legendary Portuguese player would eventually wind up in the United States and join Major League Soccer. That never happened.

Instead, the part-time New Yorker has moved on from his apartment—at a huge loss.

We can’t feel too bad for Ronaldo, given that Forbes has ranked him as the third-highest-paid athlete in the world, with $120 million in earnings in 2021 alone.

Even so, no one likes to lose money. So how did this happen?

From the get-go, the sky-high purchase price added to the challenge.

Initially, the player listed the lavish aerie for just under $9 million in 2019, less than half of what he had paid four years before.

In 2020, the price dropped to $7.99 million, and remained there until selling last November, at the even lower amount.

Part of the issue could have been the timing of the pandemic, which at first put a damper on the housing market, as well as on interested buyers.

“He definitely paid way too much. So that answers part of the question as to what the loss is,” says one luxury real estate specialist, Dolly Lenz, CEO and founder of Dolly Lenz Real Estate.

“Then, the perfect storm of COVID and bad luck,” Lenz adds, noting that New York real estate brokers were locked down and couldn’t show the property.

Some fans urged the forward to move out, even collecting signatures for a petition in 2017. Other units in the building also struggled to sell in Trump Tower during Trump’s term.

Quite apart from the politics surrounding Trump, logistical issues were involved.

Jenny Lenz, a real estate expert with Dolly Lenz Real Estate, notes that Trump Tower, where Donald and Melania Trump keep a residence, became a huge hassle to show to prospective buyers, because of the presence of the Secret Service and the protocols involved with security.

So perhaps the signs pointed for the player to let it go, no matter what the financial loss.

Ronaldo, 37, isn’t likely to feel the financial pain in the way others might.

“He could afford to be done. Sometimes the headache isn’t worth it,” Dolly Lenz adds.

The five-time FIFA player of the year is reported to be the first active team-sport athlete to surpass $1 billion in career earnings.

The post Why Did Cristiano Ronaldo Sell His Trump Tower NYC Condo for a Loss? appeared first on Real Estate News & Insights | realtor.com®.

MUSCATINE, Iowa--(BUSINESS WIRE)--HNI Corporation (NYSE: HNI) announced today its Board of Directors declared a quarterly dividend of 32 cents per … END_OF_DOCUMENT_TOKEN_TO_BE_REPLACED

Tokyo (CNN) — The Japan Tourism Agency announced on Tuesday, May 17 that it would start allowing small group tours in May as part of a "test tourism" … END_OF_DOCUMENT_TOKEN_TO_BE_REPLACED

If you’re superstitious, today is your day.That's because it's Friday the 13th (the only one of the year, in fact). It's a day when bad juju reigns … END_OF_DOCUMENT_TOKEN_TO_BE_REPLACED