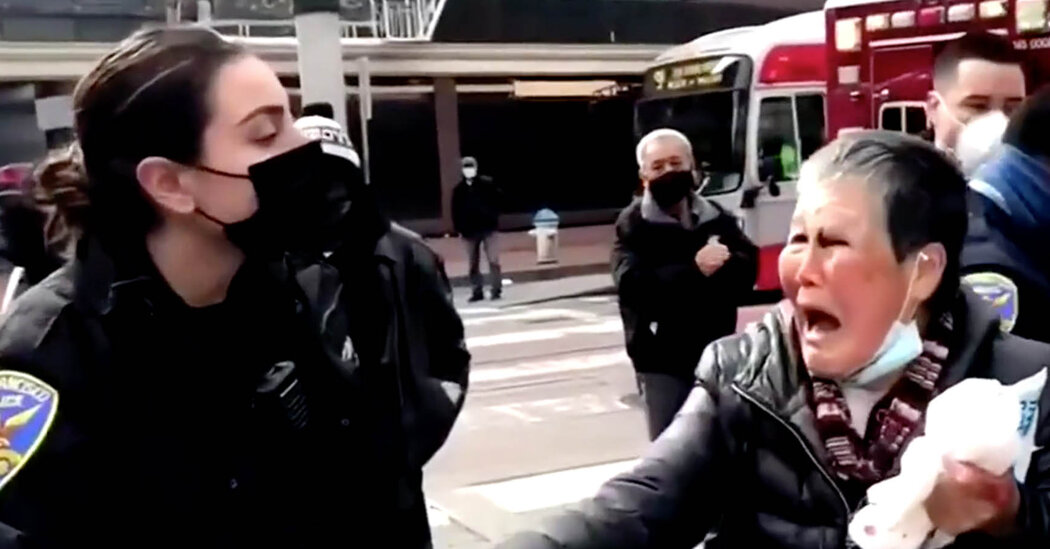 The attack against Ms. Xie was one of several that have been captured, at least in part, on video.

Her assailant, whom the police identified as Steven Jenkins, 39, first attacked an 83-year-old Vietnamese man, Ngoc Pham, who had been grocery shopping on March 17. According to the police, the attacker was then chased by a security guard; he punched Ms. Xie while being pursued.

Video footage from the immediate aftermath of the assault shows Ms. Xie holding an ice pack to her face and telling officers and bystanders about her attacker. “One big punch came down on me,” she said in Cantonese, wailing in distress.

“Investigators are working to determine if racial bias was a motivating factor in the incident,” the San Francisco Police Department said in a statement last week. The police did not immediately respond to a request for comment on Thursday.

Mr. Jenkins has pleaded not guilty to the charges against him, which included elder abuse and assault, according to his lawyer, Eric McBurney. Mr. Jenkins is being held without bail.

“It’s been difficult on the Asian-American community — of course I understand,” Mr. McBurney said Thursday. “These elderly, first-generation immigrants who give up the world to give their kids the American experience — there should be an award for people like this.”

Mr. McBurney added that he would provide more details about Mr. Jenkins, and about what happened on March 17, in the near future. “As more information is shared,” he said, “I think that people will see that this is more complex.”

The day after the attack, Mr. Chen set up the fund-raiser on GoFundMe. He wrote that Ms. Xie “has been severely affected mentally, physically, and emotionally,” adding that she said she was “afraid to step out of her home from now on.”

On a landlocked street corner at the entrance to the South Street Seaport stands a shabby, rust-streaked old lighthouse, its lantern dark, dwarfed by … END_OF_DOCUMENT_TOKEN_TO_BE_REPLACED

Kohl's announced Friday that it is terminating talks to sell its business, saying that retail environment has significantly deteriorated since the … END_OF_DOCUMENT_TOKEN_TO_BE_REPLACED