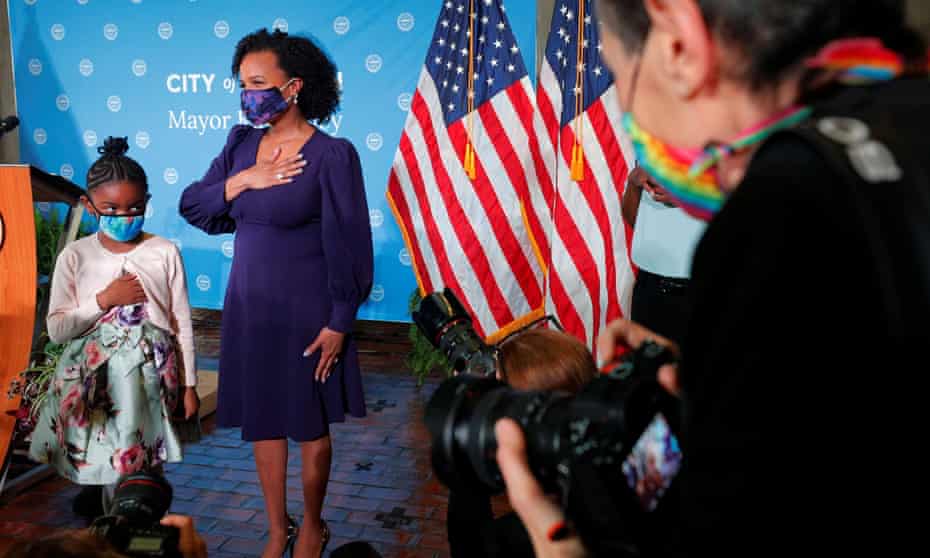 Earlier this week, Kim Janey, the first woman and Black person to lead the city of Boston, became acting mayor.

That’s a lot of firsts for a city that was central in the abolition movement and educational home of civil rights leaders such as Martin Luther King Jr, who studied at Boston University.

Fifty-four white men have led Boston since it was incorporated as a city in 1822, most described as being of “New England Yankee” or Irish descent, and before that numerous white selectmen from when it was settled in 1630.

That changed this week with the rise of Janey to the position of acting mayor, with the strong prospect she will run for election this November in hopes of cementing her position.

The outgoing mayor, Martin Walsh, just left to become Joe Biden’s labor secretary. As council president, Janey was next in line, with the title of acting mayor bestowed by the city’s charter.

The ascension is a far cry from when she was an 11-year-old being bussed from the predominantly Black neighborhood of Roxbury to a middle school in much whiter, grittier neighborhood of Charlestown in 1976, watching angry white faces protesting the effects of a court-mandated effort intending to desegregate the school district.

“For months I saw them throw rocks, bottles, sticks, yell racial slurs … ‘Go back to Africa’, ‘You don’t belong here’,” she told the Guardian.

Janey went back to that school on her first day as acting mayor, stopping by a classroom of students learning about desegregation.

“To be able to hear their thoughts on it, and then talk to them as someone who has lived through it, and is now standing in their classroom as the first Black mayor is pretty powerful,” she said.

Janey’s ancestors escaped slavery through the Underground Railroad to Nova Scotia, with some settling in Boston seven generations ago, as described by the Massachusetts genealogist and author Chris Child.

Janey became a mother at 16, and attended community college while supporting her daughter, Kimesha.

She transferred to Smith College, where she cleaned bathrooms to pay for her degree. Her studies were interrupted to care for a relative, but she eventually earned her Smith degree in 1994.

Before entering politics, she worked as an activist and project director at Massachusetts Advocates for Children, promoting educational equity.

Janey won a city council election in 2017 and went on to represent parts of the wealthier neighborhoods of the South End and the Fenway, and the more racially diverse neighborhoods of Dorchester and Roxbury.

Many of her constituents fall under the oft-quoted statistic from the 2015 report by the Federal Reserve Bank of Boston – that the median net worth for Black families in the city is just $8, compared with $247,500 for white families.

That, she said at her first mayoral address, is “not an accident. It’s a product of the discriminatory policies that we have all inherited. We need to call it out.”

Her tenure starts at a time when racial and financial inequalities were laid bare by the coronavirus pandemic surging through Boston’s communities of color, especially among essential workers.

Janey’s stated immediate goals are fair vaccine distribution, especially getting more shots to underserved Black communities, returning children to school safely, and centering disadvantaged workers in the city’s economic recovery. But she has inherited a set of additional challenges.

Janey will be the key facilitator in a budget battle that may mirror the fight she led last year. Shortly after the death of George Floyd under the knee of a white police officer, Janey led a group of councilors to demand Walsh cut the $414m police budget by 10%, and infuse social programs with $300m in city funds.

While she didn’t commit to the same budget cut, in an interview with the Guardian this week, Janey did say she was reviewing police reform and plans to hire a director to lead the city’s new police accountability office, a measure signed by Walsh in January.

Beyond that, she wants to “think bigger on issues beyond police overtime” and reimagine how residents can respond to crises.

“If a resident is calling 911 when they see someone who may be battling eviction or if they see someone sleeping on the front stoop at a store front, are police the right response?” she said, adding alternatives like clinicians and housing experts might be better responders.

She said she wants to tackle economic struggles and inequality.

“The same communities hardest hit by the public health crisis are experiencing the highest rates of housing and food insecurity” Janey wrote in an op-ed, saying she will take on the issue with “new urgency”.

Segun Idowu, executive director of the Black economic council of Massachusetts, worked with then councilor Janey on issues faced by Black small businesses and cannabis shops hard hit by the pandemic, and hopes that she will improve support.

“What’s important about this is, in Boston’s 200-year history, the person in the corner office doesn’t need a crash course to understand the experiences of half of the city’s population,” said Idowu.

Janey has not announced whether she will run for mayor in November but two individuals close to her told the Guardian she is seriously considering it.

But right now, Janey is relishing her historic moment.

“A hundred and ninethy-nine years is long enough. Madam. Mayor. Kim. Janey,” reads a video posted on her Twitter account, showing all of Boston’s mayors’ white male faces, ending in her own.

A detail of Janssen Johnson & Johnson COVID-19 vaccine that is not currently being given out because it has been put on hold.Allen J. Schaben | … END_OF_DOCUMENT_TOKEN_TO_BE_REPLACED