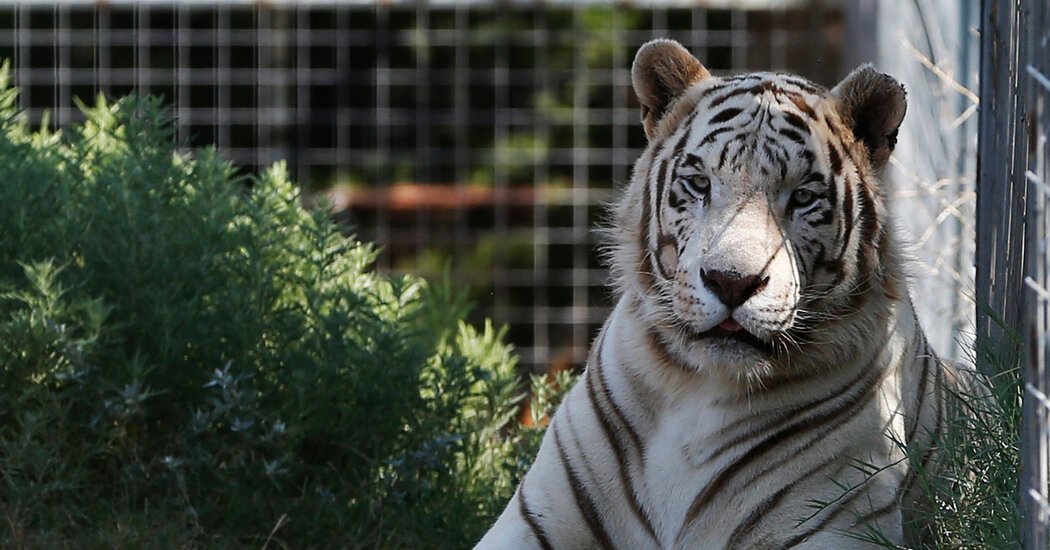 The federal authorities have confiscated 69 big cats from an Oklahoma animal park run by Jeffrey Lowe, the man who took control of an exotic-animal complex at the center of the popular Netflix documentary “Tiger King,” the Justice Department announced on Thursday.

Prosecutors said in a 52-page affidavit that they believed a jaguar, seven lions, 46 tigers and 15 lion-tiger hybrids owned by Mr. Lowe and his wife, Lauren Lowe, had been sold, purchased or transported — a violation of the Endangered Species Act that protects the animals and makes them subject to seizure. The affidavit stated that the animals, kept at Tiger King Park in Thackerville, Okla., had been “harmed and harassed.”

The Lowes are the latest figures from the documentary, about feuding exotic-animal owners and animal-rights activists, to face accusations of wrongdoing by the government.

Bhagavan Antle, who is known as Doc, was charged in October with two felony counts related to wildlife trafficking and 13 additional misdemeanors.

In November, the Lowes were accused of violating the Endangered Species Act and the Animal Welfare Act in a 110-page civil complaint. The Justice Department accused the couple of exhibiting the animals without a license and of jeopardizing their health.

Mr. Lowe’s lawyer, James M. Wirth, did not immediately respond to phone calls and emails seeking comment on Thursday. In November, he supported the couple, saying they were “consistently caring and kind stewards of animals in their care” and that the government had constructed a “fictional interpretation” of the Animal Welfare Act.

Until August, Mr. Lowe and his wife operated a Wynnewood, Okla., animal park that used to be owned by Joseph Maldonado-Passage, who is better known as Joe Exotic. Mr. Maldonado-Passage was sentenced last year to 22 years in prison for trying to hire a hit man to kill Carole Baskin, an animal-rights activist who criticized him.

In June, after a seven-year legal battle, a judge gave the complex, the Greater Wynnewood Exotic Animal Park, to Ms. Baskin, who quarreled with exotic tiger keepers in the documentary. In a statement on Thursday, Howard Baskin, another animal-rights activist who appeared in the show and Ms. Baskin’s husband, said that “the Lowes have neither an interest in properly caring for big cats nor the competence to do so even if they had the interest.”

Since mid-December, the U.S.D.A. has inspected Tiger King Park three times, prosecutors said, and issued citations for failing to provide the animals with adequate or timely veterinary care, appropriate nutrition or shelter that protected them from the weather.

The Lowes were also found in contempt of court orders that required them to establish and maintain a veterinary care program that met the standards set by the Animal Welfare Act.

Fourteen big cats seized by the government on Jan. 24 were underweight, and some had worms, according to the federal affidavit. Most of them also had problems with their paw pads, including raw and irritated pads, lesions and ulcers that investigators believed had resulted from the animals’ being housed in wet, abrasive environments, like sand, that were found at the park.

AUSTIN, Texas--(BUSINESS WIRE)--As the first multifamily management company to be recognized in the Public Relations and Marketing Excellence Awards, … END_OF_DOCUMENT_TOKEN_TO_BE_REPLACED

There have been whispers of cooling housing and rental prices in the San Francisco Bay Area, but that hasn't yet translated into practical, noticeable … END_OF_DOCUMENT_TOKEN_TO_BE_REPLACED

Cars pass in Independence Square at twilight in Kyiv, Ukraine, Monday, Oct. 31, 2022. Rolling ... [+] blackouts are increasing across Ukraine as the … END_OF_DOCUMENT_TOKEN_TO_BE_REPLACED