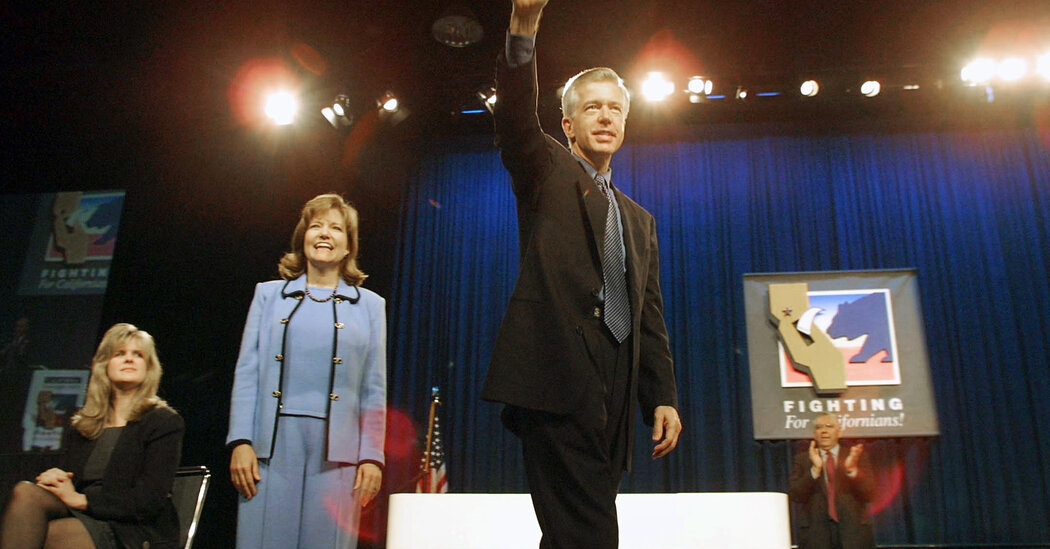 This evening, Gov. Gavin Newsom is set to give his State of the State address from a nearly empty Dodger Stadium.

The speech, he hinted on Monday, will be a moment to recognize the “bright light” at the end of the tunnel.

“We are very close to turning a proverbial page,” the governor said, speaking at a news conference in Tulare County, part of his tour highlighting efforts to bring vaccines to California communities hardest hit by the pandemic.

Nearly two decades ago, another governor spoke to a California enveloped in crisis — much of it stemming from another national trauma. But on Jan. 8, 2003, as Gray Davis, the governor at the time, gave what would be his last State of the State address, the path was less clear through a painful recession in the wake of Sept. 11, 2001, and fixes for recent catastrophic failures in the state’s energy system had been obscure.

to be removed from office by voters.

Mr. Davis was the first. So I asked him to reflect on the pandemic, Mr. Newsom’s performance and what it’s like to be recalled — then replaced by Arnold Schwarzenegger.

Here’s our conversation, edited and condensed for length and clarity:

Hi Governor Davis, thanks so much for taking the time to talk. So you’re at your condo in Westwood, I hear?

Yes, I can show you! (He turns the camera to show a cluster of office towers in the near distance outside the high-rise window.) You see those buildings? That’s where I work. So I have a relatively short commute.

vaccine by the end of May as opposed to the end of July may spur businesses to open a little earlier than they were planning.

I mean, it’s amazing what adults in the room can do. Trump had 400 million vaccine doses. But he kind of dumped them on states, and said, “That’s your problem now.”

So it’s been good that Biden has been working with Gavin on setting up vaccination sites in Oakland and Cal State L.A. Their interests are aligned.

What about everything before that? Do you think that criticisms of Governor Newsom — for abruptly changing directions and confusing messaging around restrictions, for example, or his French Laundry dinner — have been unfair?

The simple answer is I really believe he’s done a very good job under very trying circumstances. I can’t remember a governor since World War II who’s had so many things to deal with at the same time.

The pandemic, keeping people alive, shutting down the economy to do that, wildfires, social unrest — there was no precedent to point to. There have been some midcourse corrections but at the end of the day, people understand we are essentially in a war.

So given that, you just have to look at the numbers. Most states have lost more lives per capita.

The governor is seeing a credible recall effort. I have to ask how you think this moment compares with 2003 and your experience being recalled. Do you think political division is more intense now?

this recall project is no more than an expensive vanity project pushed largely by political consultants who want to get another job.

Californians want their governor to spend all his time making sure they can get their jobs back, they can pay their rents, their kids can go to school — things people want.

There is an absolute right to put a recall on the ballot, but it is clearly not the right time to do it in California.

[Read more about the recall process in California.]

What is it like, day to day, to govern during a major national crisis? Although we certainly had some big challenges, Governor Newsom started his term with relative stability. That has obviously changed.

Every governor comes into office with an agenda in his or her mind, and they want to implement those ideas. Then, sort of out of the blue comes this humongous problem. You kind of have to drop everything you campaigned on and solve that problem.

We reduced class sizes, produced more scholarships. But it was not important when the energy crisis was happening.

running for office in 1998, we had an open primary and nobody thought I could win. We ended up winning by 20 points.

Then a recall at the end of the process also didn’t seem fair. But it’s part of the process. Californians for over 100 years have had the right to initiate a recall election. It’s a contact sport. If you don’t like it, run in some other state or find another profession. If you lose the recall, part of your job is to help the next governor.

Arnold Schwarzenegger — we actually have a pretty good relationship, and it’s in part because we worked closely on the transition. We see each other. We keep in touch.

Do you have any advice for Governor Newsom as he confronts a similar prospect? Is there anything you think he should say in the State of the State to communicate with Californians?

much more Democratic than it was in 2003.

Read more about whether America’s infrastructure is ready for a transition to electric vehicles. [The New York Times]

An affordable center-chimney Colonial in Glastonbury, CT, is the oldest property to hit the market this week on Realtor.com®.Offered at a steep … END_OF_DOCUMENT_TOKEN_TO_BE_REPLACED

Nissan was one of the early pioneers of the electric car. The Leaf has now sold over 600,000 units worldwide since its launch in 2011 and is still … END_OF_DOCUMENT_TOKEN_TO_BE_REPLACED

RUDNE, Ukraine — Yurii Brukhal, an electrician by trade, didn’t have a very dangerous role when he volunteered for Ukraine’s territorial defense … END_OF_DOCUMENT_TOKEN_TO_BE_REPLACED