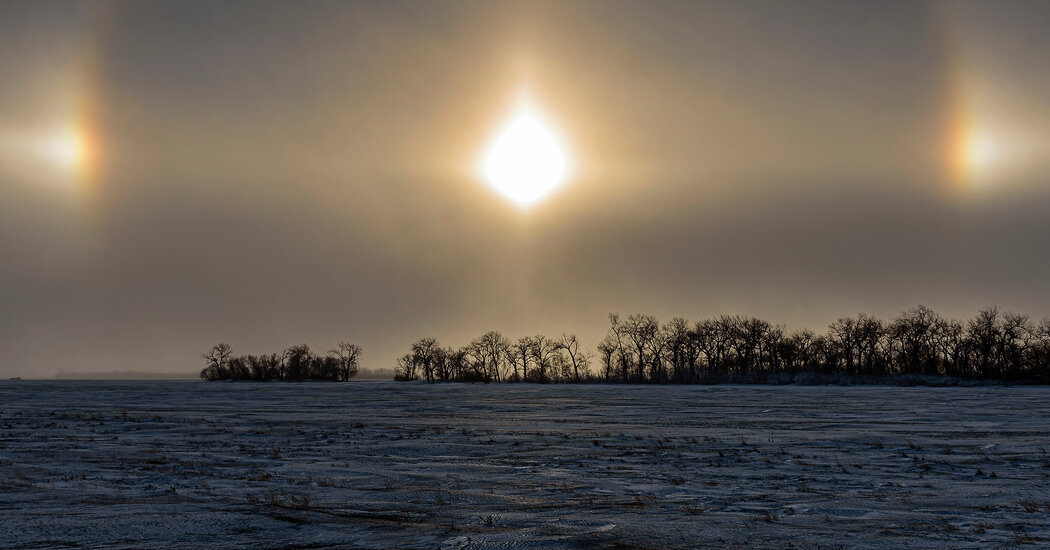 PEMBINA, N.D. — The air temperature was pushing 20 below zero and howling winds were whipping up blinding snow one morning in January when U.S. Border Patrol agents in North Dakota spotted five human forms moving through the barren borderland where America and Canada meet.

They were migrants from India: listless, disoriented and determined to reach the United States along one of its most desolate frontiers. They had been trudging through knee- to waist-deep snow for 11 hours in whiteout conditions, and two had to be rushed to a hospital.

But what felt like a heroic rescue quickly turned ominous when agents found among the migrants’ belongings a backpack with toys and diapers: A family with children, the migrants said, was still out there somewhere in the unforgiving blizzard. An urgent search, involving drones, a plane, all-terrain vehicles and agents on both sides of the border, led to the discovery several hours later of the ice-encased bodies of a family of four, lost in the snow just 15 yards short of the United States.

Jagdish Patel, 39, and his wife, Vaishali, 37, had been teachers in the Indian state of Gujarat until Covid-19 shuttered schools. With few options in their home village, they had paid to be smuggled, along with their 11-year-old daughter and 3-year-old son, into the United States. But the smugglers had abandoned them in the treacherous terrain along the border.

As security has tightened in popular southern crossing points like the Rio Grande Valley in Texas, hundreds of migrants a year are trying their luck along the less-fortified border with Canada, where there are no National Guard troops, no blazing desert heat, no towering border wall.

But the inhospitable northern plains along the North Dakota and Minnesota border can be especially perilous in the winter, when blizzards sometimes reduce visibility to zero. There is no cellphone signal to allow a call for help. There is nowhere to take shelter. Hypothermia can set in within minutes.

“I doubt this family had the first clue where they were walking,” said Sgt. Mike Jennings, a police detective in nearby Grand Forks, N.D. “You can’t see the hand in front of your face when snow is blowing so hard.”

In the area around Pembina, N.D., just two miles from the Canadian border, the Indians were not the first to make the trek this winter. The previous week, the Border Patrol intercepted an Eritrean man who had plodded through the snow from Canada. Twice in December and on Jan. 12, agents found boot prints in the snow — migrants who had passed through and slipped away.

The Patels, as best as Canadian and U.S. officials could reconstruct it later, were part of a group of 11 Indian migrants who had assembled in the tiny Canadian town of Emerson and were given instructions on how to cross the border on foot.

They expected to meet a smuggler on the American side who would deliver them to their final destination, most likely Illinois, where they had family or friends. But the family, perhaps trailing with two children, got separated from the rest as the migrants fought their way through the snowy darkness.

More fascinating tales you can’t help but read all the way to the end.

An autopsy determined they had died from exposure to the cold, an outcome that appeared predetermined as soon as they lost their way.

“At negative 29 degrees wind chill, you can get frostbite within minutes,” said Scott Good, the Border Patrol’s chief patrol agent in the area. “There is nothing that is going to protect you for 11 hours.”

Gujarat state has a long history of immigration to the United States, a trend that has only intensified during the pandemic, creating brisk demand for smuggling enterprises that masquerade as travel agencies.

The Patels left the state capital, Gandhinagar, after losing their teaching jobs during the pandemic. They moved to Dingucha, a farming village of 3,000, where Mr. Patel worked on his father’s plot of land and at his brother’s wholesale garment business.

But he had greater ambitions.

Former residents of Dingucha who have emigrated to the West have prospered and funded construction of a school, temple and community center in the village.

The travel agencies’ ads, affixed to lamp posts in the village, tout visas for immigration and study in Canada, a country that sometimes offers easier access for immigrants than the United States.

“Free Application. Spouse Can Apply. Offer Letter in 3 days,” one of them offers.

Some guarantee admission to study programs, even for those without the English-proficiency test that is normally required.

It is not clear whether the agencies deliver on such promises, but it has become common for migrants like the Patels to use the agencies to obtain visas, sometimes under false pretenses, such as by seeking student or tourist visas when their actual intent is to slip into the United States.

“The agents guide the people, or misguide them, into going illegally,” Anil Pratham, director of the anti-human trafficking unit of the Gujarat police, said in a telephone interview.

The Patels, a family friend said, decided to try to go to the United States, where they had family. They would fly to Canada, and once there, they would be met by guides who would help them cross the border.

“Jagdish got the visa. They left to build a new life,” said Amrit Vakil, who during a visit to the village in January congratulated Mr. Patel’s parents for their son’s determination to improve the family’s lot.

The Patels arrived in Toronto on Jan. 12.

Six days later, they were among the group of 11 Indians dropped off in Emerson, with instructions to walk south until they spotted the lights of a natural gas plant on the other side of the border, the only landmark for several miles. There, near the Red River, a van would be waiting for them.

The National Weather Service on Jan. 18 issued a blizzard warning. Blowing snow was expected to limit visibility to one-quarter of a mile or less, it said, with travel advised for “emergencies only.”

The migrants set out some time after dark.

It was a straight shot from the edge of the little town, about five miles to the border.

Several in the group donned matching winter coats with fur-trimmed hoods, gloves, balaclavas and rubber boots. But soon after their departure, 35-mile-per-hour gusts would begin blasting snow everywhere, and the Patels became separated from the group.

Perhaps the couple stopped to tend to their children, whose smaller bodies were more sensitive to the cold. Even if they wanted to turn back, they would not be able to see where they were going, said Dan Riddle, senior meteorologist at the National Weather Service in Grand Forks.

“The family probably got disoriented, became lost and perhaps stopped and didn’t know what else to do,” he said.

Instead of continuing south toward the United States, the family stumbled eastward — further from where they left, further from the meeting point.

A Van in a Ditch

Pembina, a speck of a town on the border, boasts one bar, one school, one grocery store and four churches that cater to the sugar beet farmers and Customs and Border Protection employees who live there.

In the summer, the sole motel, Red Roost, welcomes catfish anglers who cast their lines in the Red River. During the winter, it is mainly a refuge for travelers stranded by severe weather, said Lyndi Needham, the owner.

“People who have never lived in the North and seen subzero temperatures for weeks on end really have no concept,” she said. “This place is colder than your kitchen freezer.”

Around sunrise on Jan. 19, a man the authorities identified as Steve Shand, a 47-year-old former Uber driver from Florida, drove a white 15-passenger van into a snow-filled ditch a few miles outside of Pembina, on the Minnesota side of the river.

A snow plow operator who happened to drive by pulled the vehicle out. He later tipped off the Border Patrol that there had been two passengers in the van, who looked Indian or Pakistani, and that Mr. Shand had told him that he was on his way to visit friends in Winnipeg, about 70 miles north.

The Border Patrol started a search, and at around 8:30 a.m., intercepted the van, arresting Mr. Shand when an agent determined that the two Indians sitting in the back had entered the United States unlawfully.

In the van were several cases of bottled water, juice and snacks, with receipts from Walmart in Fargo from just the day before.

As the driver and the passengers were being transported to the Pembina station, other agents were dispatched to sweep the area. They encountered the five Indians staggering along the road, heading south. A woman in her 20s, apparently suffering from frostbite and hypothermia, leaned on two other people.

“They wanted to be rescued,” said Kathryn Siemer, the deputy patrol agent in charge in Pembina, whose team found them.

At the station, one of the migrants revealed that the group had been walking for more than 11 hours.

He also said that he had spent a large sum of money to enter Canada with a student visa he had obtained under false pretenses — he had no intention of studying in Canada. After crossing into the United States, he had expected to be met and transported to Chicago.

It was when Border Patrol agents searched the migrants’ belongings that they found the children’s items in a backpack and queried about them. A family of four had originally been with them, the migrants said. They didn’t know where they were.

At around 9:20 a.m., the Royal Canadian Mounted Police in Emerson received a call from the U.S. Border Patrol alerting them about the missing family, and immediately deployed a team to the nearby fields.

Waist-deep snow made the terrain impassable with a four-wheel-drive truck, forcing the search party to return for extreme-terrain vehicles fitted with tracks that can traverse snow.

At 1:30 p.m., they saw what looked like human footprints in the snow. Not far away, they found what they dreaded: three bodies, a man, woman and toddler, frozen in the snow in the contorted positions in which they died. Several feet away was the stiff body of an 11-year-old girl, huddled into a ball.

Did the children succumb first, and the parents waited at their sides? Did the family simply give up and lie down in the windy darkness?

The other seven Indian migrants were placed in deportation proceedings and released with orders to check in with Immigration and Customs Enforcement in Chicago.

Mr. Shand, a naturalized citizen from Jamaica, was released without bond pending his trial.

The bodies of the Patel family were taken to a morgue in Winnipeg.

Dilip Patel, a relative in Illinois, organized a GoFundMe campaign that raised more than $80,000 for funeral services.

On Feb. 6, nearly a dozen relatives from the United States and India gathered at a funeral home, and a local Indian priest performed final rites. The ceremony was livestreamed to villagers in Dingucha.

Mourners filed past four open caskets adorned with red-and-white flower arrangements. A toy truck and stuffed animal poked out of the tiny casket of 3-year-old Dharmik. A stuffed unicorn rested alongside his sister, Vihangi, whose hair was adorned with a shiny pink bow.

The Patels were cremated later that day.

“It was the saddest funeral for me,” said Bhadresh Bhatt, former president of the Hindu Society of Manitoba, who attended. “Such a young family. Especially the two young kids, they had not seen the world yet.”

AUSTIN, Texas--(BUSINESS WIRE)--As the first multifamily management company to be recognized in the Public Relations and Marketing Excellence Awards, … END_OF_DOCUMENT_TOKEN_TO_BE_REPLACED

There have been whispers of cooling housing and rental prices in the San Francisco Bay Area, but that hasn't yet translated into practical, noticeable … END_OF_DOCUMENT_TOKEN_TO_BE_REPLACED

Cars pass in Independence Square at twilight in Kyiv, Ukraine, Monday, Oct. 31, 2022. Rolling ... [+] blackouts are increasing across Ukraine as the … END_OF_DOCUMENT_TOKEN_TO_BE_REPLACED