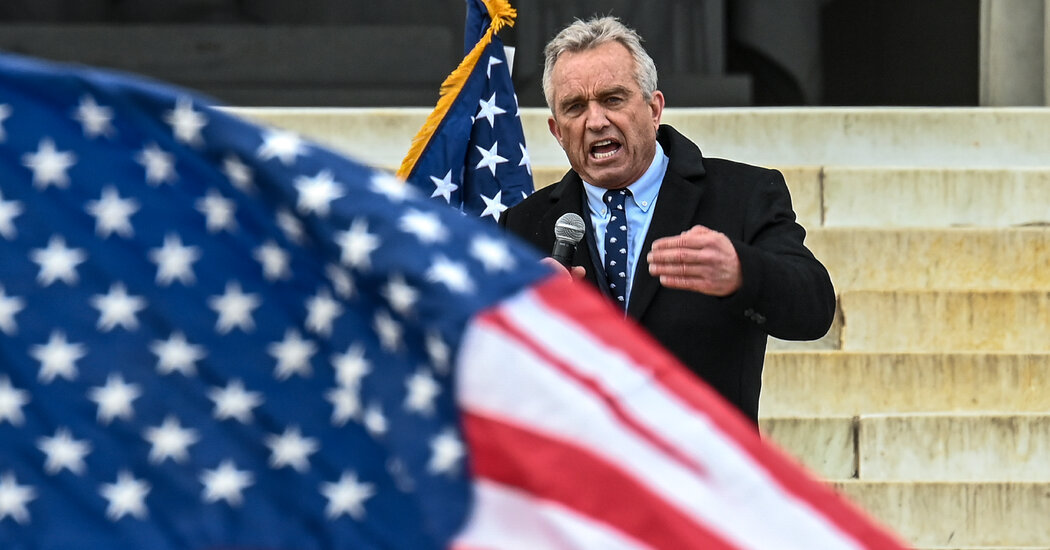 Blake Fleetwood, a writer who calls Mr. Kennedy “an inspiration” and has been a friend and skiing companion since 1971, said he could not understand why Mr. Kennedy was “risking his whole life” of activism by “taking on this crusade.”

“Why is he blowing his whole life’s work?” he asked.

Mr. Kennedy, 68, began inveighing against vaccines well before the arrival of the coronavirus, contending that they cause autism — a notion that has been soundly rejected by medical experts. But the tenor of his attacks intensified with the arrival of Covid vaccinations and brought new scrutiny not only to Mr. Kennedy’s positions on vaccines, but to other unorthodox causes he has gravitated to over the years.

Mr. Kennedy now says Sirhan B. Sirhan did not kill Mr. Kennedy’s father and has urged California parole commissioners to free him. He has repeated a popular conspiracy theory that 5G high speed transmission towers are being installed across the nation “to harvest our data and control our behavior.”

In a best-selling new book, he claimed that Dr. Anthony S. Fauci, who is President Biden’s top medical adviser for the coronavirus pandemic, and Bill Gates, the co-founder of Microsoft, were in cahoots with the pharmaceutical industry to profiteer off dangerous vaccines.

He has amassed a significant following on social media, where he circulates what is often false information on the coronavirus and vaccines. Last year he was barred from Instagram, where he had 800,000 followers, for pushing misinformation in his attacks on the vaccine. His Facebook page, with more than 300,000 followers, remains online, as does his Twitter account, with over 405,000 followers.

Mr. Kennedy declined a request for an interview, saying he was busy in a trial about vaccine damages in Jackson, Tenn. He also said he thought The New York Times had not given a fair airing of his concerns about the vaccine and had ignored his book on Dr. Fauci, despite its brisk sales. But he responded to some questions by email, saying he was drawn into this issue when the mother of a child with autism brought stacks of studies purporting to show a link between vaccines and the condition to his Cape Cod home and stayed there until he reviewed them.

AUSTIN, Texas--(BUSINESS WIRE)--As the first multifamily management company to be recognized in the Public Relations and Marketing Excellence Awards, … END_OF_DOCUMENT_TOKEN_TO_BE_REPLACED

There have been whispers of cooling housing and rental prices in the San Francisco Bay Area, but that hasn't yet translated into practical, noticeable … END_OF_DOCUMENT_TOKEN_TO_BE_REPLACED

Cars pass in Independence Square at twilight in Kyiv, Ukraine, Monday, Oct. 31, 2022. Rolling ... [+] blackouts are increasing across Ukraine as the … END_OF_DOCUMENT_TOKEN_TO_BE_REPLACED