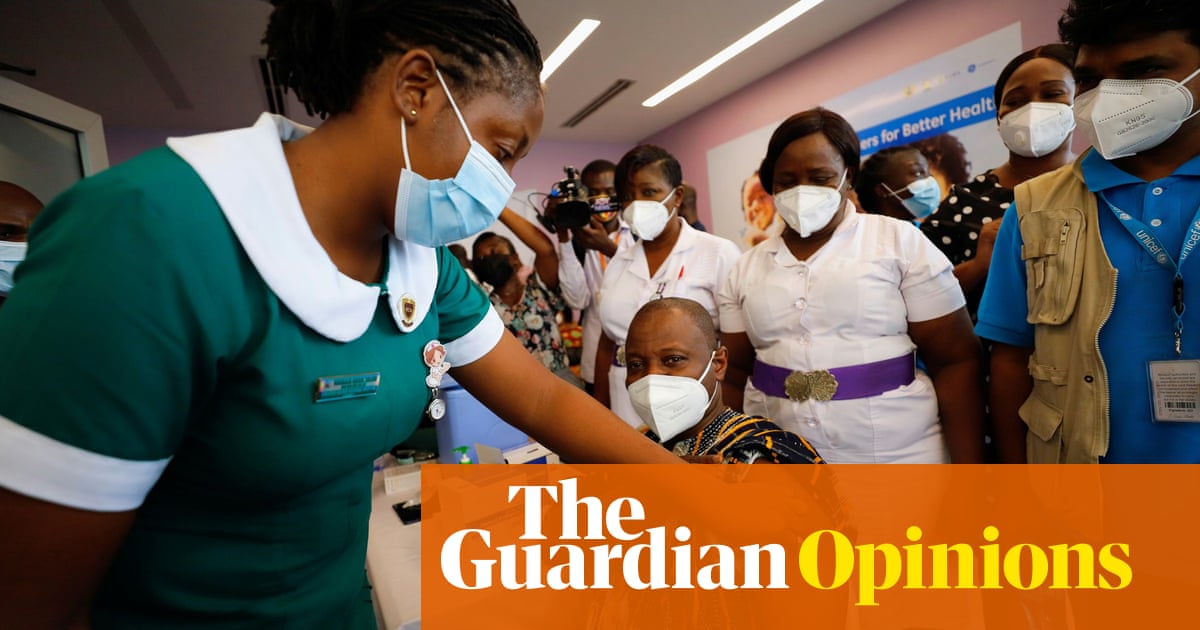 Vaccines manufactured in India for the global vaccine access programme, Covax, have reached Ghana, Ivory Coast and Colombia over the past 10 days. This was undoubtedly a moment of celebration that the miracle of science was being shared – but it was offset by the shame that many countries hit hard during the pandemic have still not received any vaccines.

Safe and effective vaccines have been developed and approved at record speed, giving us a crucial new way, in addition to traditional public health measures, to protect people from the virus. Now we must ensure they’re available to everyone, everywhere. Sharing doses, boosting manufacturing by removing barriers and ensuring that we use data effectively to target left-behind communities is key to ending this crisis.

I appreciate that India is sharing doses now, and also welcome G7 countries committing to sharing a portion of their vaccines, as well as pledging significant amounts of new funding to Covax.

However, of the 225m vaccine doses that have been administered so far, the vast majority have been in a handful of rich and vaccine-producing countries, while most low- and middle-income countries watch and wait. A me-first approach might serve short-term political interests, but it is self-defeating and will lead to a protracted recovery, with trade and travel continuing to suffer.

Any opportunity to beat this virus should be grabbed with both hands. New variants are appearing that show signs of being more transmissible, more deadly and less susceptible to vaccines. The threat is clear: as long as the virus is spreading anywhere, it has more opportunities to mutate and potentially undermine the efficacy of vaccines everywhere. We could end up back at square one.

Heads of state, international agencies and civil society groups have already signed up to a vaccine equity declaration that calls on governments and manufacturers to speed up regulatory processes and boost manufacturing.

But boosting manufacturing won’t happen by itself. We are living through an exceptional moment in history, and must rise to the challenge. Whether it’s dose sharing, tech transfer or voluntary licensing, as the WHO’s own Covid-19 Technology Access Pool initiative encourages, or waiving intellectual property rights, as South Africa and India have suggested, we need to pull out all the stops.

Flexibilities in trade regulations exist for emergencies, and surely a global pandemic, which has forced many societies to shut down and caused so much harm to business – both large and small – qualifies. We need to be on a war footing, and it’s important to be clear about what is needed.

First, we need sustainable vaccine manufacturing and production across the globe. This will be useful in this pandemic and critical for future ones. Some companies, like AstraZeneca, have shared their licences so that vaccines can be manufactured at multiple sites. Others, like Pfizer and Sanofi, have made agreements to transfer technology, such as the finishing of vaccine vials. Some governments, such as Canada, have also made deals with individual companies and are setting up entirely new manufacturing units, which will produce new doses in a matter of months.

These are significant steps but we cannot rest until everyone has access, and we need to ensure sustainable vaccine supply chains for the long term that are vastly bigger than what we have now. This will become even more important if we have to vaccinate people with boosters or reformulate vaccines to tackle variants. Waiving patents temporarily won’t mean innovators miss out. Like during the HIV crisis or in a war, companies will be paid royalties for the products they manufacture.

There are some things that the private sector does really well and there are other areas where governments need to step in. I don’t believe that globally we’re exercising our full manufacturing muscle at present. For example, some manufacturers have not been able to produce successful vaccine candidates, which is to be expected, but their production facilities could be repurposed for those vaccines that have been proven to work. To this end, I’m pleased to see President Biden announce that Johnson & Johnson and Merck will now form a partnership to increase vaccine production.

It’s also important for low- and middle-income countries to build on their domestic manufacturing capacity. Just as the yellow fever vaccine is now produced in Dakar, Senegal, an investment in manufacturing could see the same done with Covid-19 vaccines.

Vaccinating all the world at once has never been done. But if we can put a rover on Mars, we can surely produce billions of vaccines and save lives on earth.

While governments and pharmaceutical groups are key to equitable vaccine rollout, everyone has a role to play. For multinational corporations that rely on trade and travel, for example, donating to Covax is the fastest way to speed up the effort to end the pandemic and get humans moving again. For individuals, especially those who have been lucky enough to be vaccinated already, you can show also your support by donating to Covax, which in itself sends a powerful message to governments that vaccine equity is the right thing to do.

It’s not just about defeating Covid medically. The reality for millions of people is that this pandemic has stymied the job market and made it even harder to put food on the table. Children’s development and education have stalled. These effects are as serious as the pandemic itself and a further reason why, through vaccination and other health tools, we must recover together.

And in terms of global security, the faster we can vaccinate, the faster we will be able to focus on fighting other threats such as the climate crisis, which has not disappeared while our attention has been consumed by the virus.

The future is ours to write. Let’s not be held back by politics, business as usual or those who say we can’t. This is the biggest crisis of our lifetimes, but seeing vaccines rolling out in Ghana should only buoy our collective enthusiasm to make sure that no country is left behind. While the virus has taken advantage of our interconnectedness, we can also turn the tables by using it to spread life-saving vaccines further and faster than ever before.

If not now, when?

A century-old mansion in Pittsburgh has undergone a serious overhaul. The end result is one of the most expensive single-family homes in the Steel … END_OF_DOCUMENT_TOKEN_TO_BE_REPLACED

ATLANTA, GEORGIA - OCTOBER 16: Ozzie Albies #1 of the Atlanta Braves celebrates after scoring the ... [+] winning run on a walk-off RBI single by … END_OF_DOCUMENT_TOKEN_TO_BE_REPLACED

Mr. Amess was also a vocal supporter of the Iranian opposition group Mujahedeen Khalq, or M.E.K., which campaigns for the overthrow of Iran’s … END_OF_DOCUMENT_TOKEN_TO_BE_REPLACED