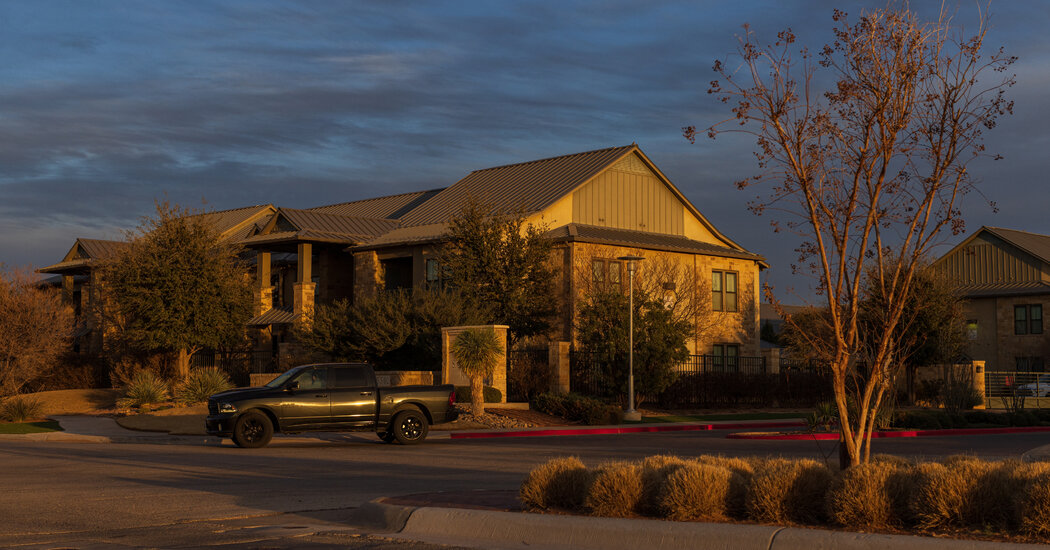 On the afternoon of March 3, Dora Vela was in the middle of her shift as a mail carrier when a message on her phone popped up with news about her 14-year-old son. Ms. Vela immediately called back.

“Juan is dead,” a woman’s voice told her, referencing her son, Juan Herrera, who had run away from home late last year.

“How do you know this?” Ms. Vela recalled shouting back. “What happened? Where is my son? I freaked out.”

The caller, who said she had been sheltering Juan as well as at least four other youths, went on to tell her that her son was fatally shot after a local sheriff’s deputy responded to a call about a burglary in progress at an upscale apartment complex in Midland, a midsize city in West Texas.

his remains in Dallas, some 330 miles away, where his body was sent to facilitate the identification of his dental records, she said.

“I have so many questions,” Ms. Vela, who also has three daughters, said last week at her modest home. “And no one’s telling me what happened.”

The result is both a fog, with a 14-year-old youth dead, and a reminder of the struggles that many families, particularly those without means, can face in finding out even the most basic facts about officer-involved deaths.

identified via dental records. He was not carrying identification at the time of his death, which might help explain why his remains were sent to a medical examiner in a bigger city, Ms. Vela said.

But the mystery surrounding the case is eating away at Ms. Vela and others in Midland, in the heart of the West Texas oil patch. While the case has received little attention outside Texas, state civil rights activists have raised questions about the use of police force during encounters with Black and Latino people and the lack of information that often follows fatal encounters with the police.

Rodolfo Rosales, a state director with the Texas branch of the League of United Latin American Citizens, the oldest and one of the largest Latino civil rights organization in the United States, urged the authorities to release any relevant footage and details about the shooting.

Sgt. Steven Blanco of the Texas State Police said no further information will be released to the public until the case has been presented to a Midland County grand jury.

Sitting in her living room, Ms. Vela reflected on her son’s brief life. She turned to a large photo of Juan wearing a white T-shirt and matching headphones.

At a young age, he found it difficult to concentrate and was later diagnosed with attention deficit hyperactivity disorder, she said.

Medication helped at first, but she terminated his treatment after he turned 11 because he complained of severe stomach aches. Ms. Vela had hoped that having him play football might keep his busy mind occupied. “He would get bored easily, but sports wasn’t for him,” she said.

His grades and behavior took a turn for the worse, and he was assigned to an alternative program for troubled youth, Ms. Vela and family members said. “It is there when he fell into the wrong crowd,” his mother said.

Ms. Vela said Juan ran away after what seemed like a routine argument between mother and son. Later, she learned he was living with a group of teenagers in another part of town. She eventually tracked some of their TikTok accounts that showed him sitting on the floor, looking distant and distraught, as seemingly older teenagers taunted him.

“Maybe he did not know how to get out of there,” she said. “Maybe he was afraid.”

With very little communication between her and the authorities, Ms. Vela and other relatives like Melanie Melendez, Juan’s aunt, have gathered bits of information talking to people on the streets and viewing social media.

On the early hours of March 3, they learned, Juan and four other friends had gone to the Sandstone Ridge Apartments, an upscale complex with a pool and a tanning deck, to do “car hopping,” in which young people commit thefts as opportunities arise and then speed away in a car, Ms. Vela said. That’s where the shooting took place, the police statement said.

It is unclear if the teenagers were armed or if the deputy was wearing a body camera.

Two weeks after his death, Juan’s body was mourned at a funeral home in Midland surrounded by heartbroken relatives.

Grief did not stop Ms. Vela from looking for clues about her son’s last moments. She wasn’t told where on his body he was shot or by how many bullets. But during a rosary prayer service, Ms. Vela stood over Juan’s open brown wooden coffin and noticed heavy layers of makeup on the top part of his face and that his hair was combed downward, as if to obscure an injury. A black rosary was placed on his folded hands.

In the background, the song “Un Dia a La Vez” — “One Day at a Time” — by Los Tigres del Norte, a norteño band, played as a photo slide showed Juan as a newborn staring curiously at the camera. Later slides showed him smiling next to his three sisters and goofing around with friends at school.

A day later, a small group of relatives attended his funeral at Our Lady of Guadalupe Parish and Shrine. The Rev. Timothy Hayter pointed at a statue of a crucified Jesus at the altar and tried to console them.

He asked the somber crowd to remember Juan as a shy teenager who loved music and drawing and who had said a prayer before riding a roller coaster.

“He was legitimately really afraid, and what did he do? He asked God to help him,” Father Hayter said. “And I have no doubt that in those darkest moments for him, that he did exactly what his mother taught him, to reach out to God.”

Some in the pews gasped loudly and others held one another tightly.

“Hang on to those moments,” the priest told them.

After the funeral, Ms. Vela and her oldest daughter, Esmeralda Herrera, 18, who moved back home from Arizona after her brother died, held on to remnants of his life. Ms. Herrera remembered that Juan had sent her a song he had recorded recently and pressed play on her phone. Mother and daughter took in every word.

AUSTIN, Texas--(BUSINESS WIRE)--As the first multifamily management company to be recognized in the Public Relations and Marketing Excellence Awards, … END_OF_DOCUMENT_TOKEN_TO_BE_REPLACED

There have been whispers of cooling housing and rental prices in the San Francisco Bay Area, but that hasn't yet translated into practical, noticeable … END_OF_DOCUMENT_TOKEN_TO_BE_REPLACED

Cars pass in Independence Square at twilight in Kyiv, Ukraine, Monday, Oct. 31, 2022. Rolling ... [+] blackouts are increasing across Ukraine as the … END_OF_DOCUMENT_TOKEN_TO_BE_REPLACED