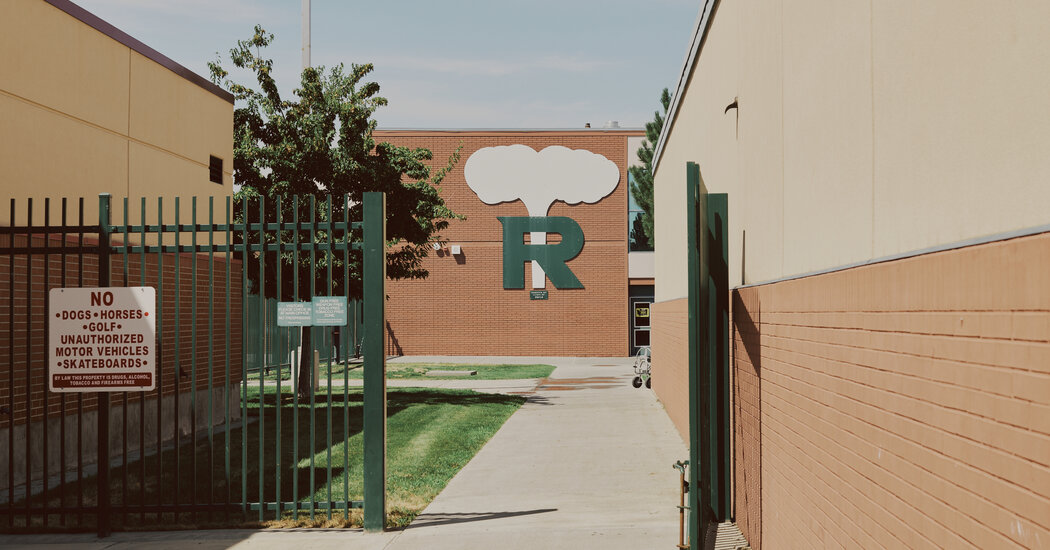 A high school in Richland, Wash., is emblazoned with a mushroom cloud. But some are asking for better ways to recognize the city’s history-altering past.

We’re exploring how America defines itself one place at a time. In Richland, Wash., residents are wrestling with their connections to the atomic bomb and World War II.

RICHLAND, Wash. — In the arid shrublands of southeastern Washington state, a small agricultural outpost underwent a covert transformation during World War II. Thousands of workers converged next to the Columbia River, rushing to produce the material needed for the ultimate weapon.

These days, decades after a nuclear bomb destroyed Nagasaki, Japan, the engineers and scientists who enriched the radioactive material for it have a legacy. Diners at a brewpub in this company town can wash down a Reactor Core pizza with a Plutonium Porter. Nearby, when I visited recently, teenagers were mingling at the Atomic Bowl bowling alley. Across the way sits Richland High School, home of the Bombers, where flags, walls and the school basketball court feature a mushroom cloud.

“Proud of the cloud,” many students declare.

That boisterous civic pride has at times become a point of contention between those who see the city’s history-making heritage as one deserving of overt celebration and those who find the current motifs far too cavalier for commemorating an event that killed tens of thousands of people. Those conversations have resurfaced as communities around the nation consider how best to show history without alienating residents and visitors who do not view the past with the same reverence.

Last month, down the street from the high school, I went to a ceremony for the 77th anniversary of the bombing at Nagasaki. There, Adrienne Fletcher stood to tell her family’s story: Her grandmother was at a boarding school just outside Nagasaki when the bombing occurred, and she saw the mushroom cloud from her classroom window.

Ms. Fletcher, now a resident of Richland, said that her grandmother survived but has dealt with lifelong health issues.

“Tonight, I ask you to remember the humans — the humans — who have lost their lives or have suffered through daily, excruciating pain from radiation exposure,” she told attendees, some of whom worked in the region’s nuclear industry. “I ask you to remember the children taken away from their parents. I ask you to remember the families torn away from their homes. I ask, as you move through this community with its numerous reminders of radioactive destruction, that you take time to reflect — that you reflect on the consequences of war and violence, that you reflect on the impact that these daily reminders of this violence mean to an entire group of people, and how it affects them.”

Before the Manhattan Project, the secret U.S. plan that produced the first nuclear weapons, Richland was a village of about 250 people who had settled to farm next to the Columbia River. But the federal government swooped in to acquire the land, ousting residents from homes and farms in the area in order to use the remote location to build nuclear reactors and hundreds of associated buildings at what is now known as the Hanford Site, along with neighborhoods in Richland to house the many workers. The town soon had 11,000 people.

By 1945, the United States and its allies were preparing for a grueling invasion of Japan that was expected to lead to mass casualties on both sides of the conflict. But with the Manhattan Project demonstrating success, President Harry Truman instead chose to deploy the nation’s new nuclear weapon.

The bombs dropped on Hiroshima (with uranium enriched in Oak Ridge, Tenn.) and Nagasaki in August that year killed an estimated 200,000 people, many instantly and many others from radiation exposure in the days and decades that followed. Soon after the Nagasaki bombing, and with the Soviet Union also declaring war on Japan, the Japanese government said it would surrender.

While the making of the bomb is central to how Richland came to be, it is also at the heart of how today’s community was shaped. (The population is now roughly 60,000.) The Hanford project that enriched the plutonium was also critical during the Cold War era before ceasing production at the end of the 1980s. The site remains a major employer but is now focused on a huge decommission and decontamination effort.

Del Ballard, 92, a longtime Hanford worker who began at the site in 1951, said the employees had a lot of patriotic pride about their technological accomplishments and role in supporting national security. And as the U.S. government moved to decommission the Hanford buildings, Mr. Ballard helped lead efforts to preserve the reactor that produced the Nagasaki plutonium. Today, people can tour the reactor site.

“It was so important to the nation and the world’s history,” he said. “It was the start of the nuclear age and it was the end of World War II.”

In 1945, as the war was concluding, students at the local high school changed their name from the Beavers to the Bombers. Later, the mushroom cloud logo arrived, with many recent classes proudly adding versions of the logo around campus, even as some students challenged whether the symbol was appropriate.

Parjot Pawar, who recently graduated as Richland High’s salutatorian, said she had never liked the mushroom cloud logo or the “proud of the cloud” phrase. Last year, she said the school’s Diversity, Equity and Inclusion Committee held a meeting with the school’s principal, pressing to replace the school’s logo. But many people remained proud of the symbol and its representation of the city’s heritage.

“However, I have noticed that as the years go by and discussions on monuments and statues become more popular, there is more and more support for a change in this school’s image,” Ms. Pawar said.

Ms. Fletcher said she had first had a jarring encounter with Richland’s pride when she arrived in town and went to the high school to audition for a job with the local symphony, which was founded in 1945, largely by Hanford workers. The school’s “Bombers” name was emblazoned on a building.

At the recent “Lights for Peace” program commemorating the anniversary, Ms. Fletcher’s choir group, the Mid-Columbia Mastersingers, performed a Japanese children’s song. Then an event organizer with the National Park Service invited people to ring a bell and walk a path lined by illuminated paper bags that featured messages of peace and remembrance.

As people circled the park and rang the bell, Ms. Fletcher said in an interview that the community in many ways had been disconnected from another side of this history: the bomb’s impact. But as the nation has had more conversations in recent years about how to view its past, she has found people in Richland also more willing to hear her family’s story, more willing to hear why the city’s atomic-themed emblems prompt her to think about death and suffering.

She also learned that some of the students in her youth symphony had been advocating change at the high school.

“I think this is just the beginning of the process,” she said. “There is quite a ways to go. It’s such a big part of this community and has been for so long. I think there are many more conversations yet to be had.”

Soon after Herschel Walker, the former football star, announced he would run for U.S. Senate in Georgia as a Republican, his son Christian appeared … END_OF_DOCUMENT_TOKEN_TO_BE_REPLACED

SpaceX launched four people to the International Space Station from Florida on Wednesday, as Elon Musk's company keeps up a steady pace of crewed … END_OF_DOCUMENT_TOKEN_TO_BE_REPLACED