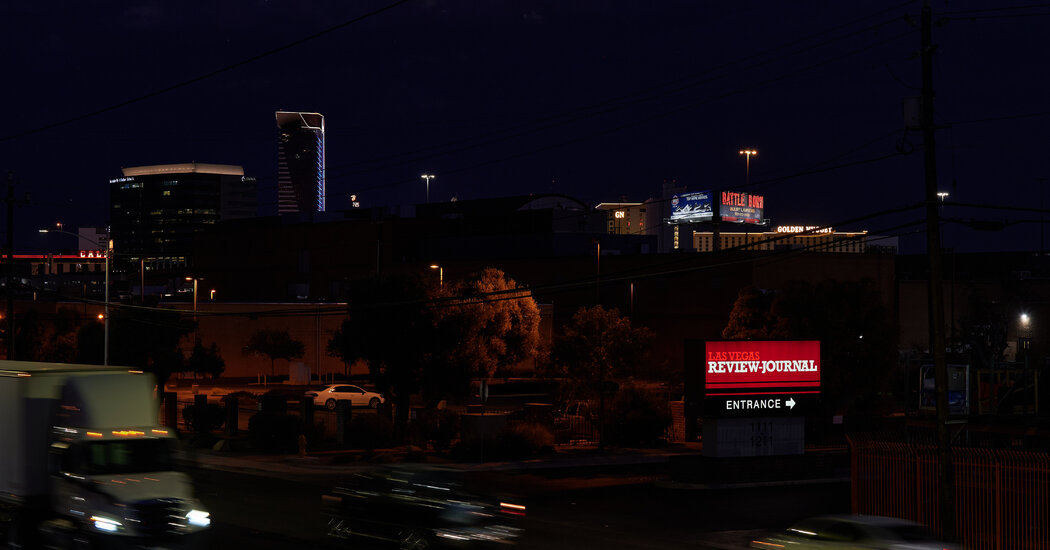 LAS VEGAS — As one of four reporters on the investigative team of Las Vegas’s main newspaper, Jeff German wrote stories that reached nearly every sordid corner of Sin City.

Even as old-school reporting jobs dwindled, Mr. German’s watchdog articles and columns pried back the curtain on mobsters, crooked politicians, casino titans and just about anyone who misused wealth or power in the city. In the last few years, he had scrutinized lavish spending by the city’s tourism agency, claims of sexual harassment at the coroner’s office and allegations that the Las Vegas Raiders football organization had violated discrimination and labor laws.

After four decades of surviving reporting on the most unsavory characters in a city with a reputation for mob-linked murders, there was little reason to think that Mr. German, 69, would be in danger when he turned his attention earlier this year to an obscure government office where some employees claimed their boss was a bully. The article didn’t even run on the front page.

he wrote a book called “Murder in Sin City” about the killing of the casino magnate Ted Binion. After the mass shooting in Las Vegas in 2017, Mr. German published an exclusive report detailing how the gunman had fired at jet fuel tanks on the ground — seemingly in hopes of causing an explosion — before opening fire on a concert below him. Last year, he co-wrote an investigation about troubles in the coroner’s office, where there were allegations of sexual harassment, retaliation and delays in autopsies.

produced a story in May that was far from a blockbuster — the agency was so obscure that few in town knew what it did — but was the kind of impactful work he was known to produce. In the story, current and former employees of Mr. Telles’s office said he had been such a bad boss that some of them had suffered headaches; they said he had played favorites, given some employees unreasonable assignments and prohibited them from using their phones. They also said he had been having an “inappropriate relationship” with an employee and that it had made the office dynamic worse.

Mr. Telles denied the claims and criticized the article in statements on Twitter and his website, but the county went on to hire a consultant to try to resolve the turmoil in the office. Mr. Telles then lost a Democratic primary campaign to Ms. Reid. Online, Mr. Telles continued to rail against Mr. German, accusing him of writing a “lying smear piece.” Mr. German discussed the online posts with his editor.

“He brushed it off and said ‘I’ve had much worse than that,’” said Rhonda Prast, an assistant managing editor at The Review-Journal who worked closely with Mr. German in recent months. “He wasn’t nervous about it. He wasn’t concerned. Neither was I.”

In recent weeks, Mr. German had continued to report on the public administrator office, recently filing a records request for text messages and emails that Mr. Telles had sent. Ms. Reid said Mr. Telles remained infuriated by the scrutiny.

The authorities said that on a Friday morning this month, Mr. Telles, who lived about a 15-minute drive from Mr. German, went to the reporter’s house and got into some altercation with him.

The man pictured on the surveillance video was wearing an orange construction vest, gloves and a large straw hat that hid his face. The police said Mr. Telles had been trying to conceal his identity. A series of road construction projects were taking place near Mr. German’s home last week, and many workers wore similar outfits.

Before he was arrested, Mr. Telles ignored reporters’ questions outside of his home.

Mr. Telles’s former wife, Tonia Burton, said she had been stunned to see that Mr. Telles had been accused of the murder.

“I’m just watching and in shock and not sure of anything,” said Ms. Burton, who was married to Mr. Telles until 2008. “I don’t think that there’s any explanation that we can come up with until he either confirms or denies that this happened.”

Ms. Burton said that two of Mr. Telles’s children had been at his home when the police showed up to search the house but had left before he was arrested. The police said Mr. Telles had hurt himself before he was taken into custody. He appeared in court on Thursday with bandages on both of his arms, and a judge ordered him to remain in jail as the case proceeded.

At The Review-Journal, Mr. German’s desk is now covered with flowers and a framed copy of a front page featuring one of the articles he wrote about irresponsible spending by the tourism agency.

Mr. German’s colleagues at the newspaper now face the difficult task of covering his murder while mourning a friend. They were among the journalists at Mr. Telles’s home, peppering him with questions in the hours before he was arrested.

The coverage of Mr. German’s death has dominated the front page of the paper that used to carry his byline. “RJ reporter is killed,” read the first headline about the crime, followed by “Suspect’s image released” and “New details in stabbing.” And then, finally, on Thursday: “Stunning arrest.”

Soon after Herschel Walker, the former football star, announced he would run for U.S. Senate in Georgia as a Republican, his son Christian appeared … END_OF_DOCUMENT_TOKEN_TO_BE_REPLACED

SpaceX launched four people to the International Space Station from Florida on Wednesday, as Elon Musk's company keeps up a steady pace of crewed … END_OF_DOCUMENT_TOKEN_TO_BE_REPLACED