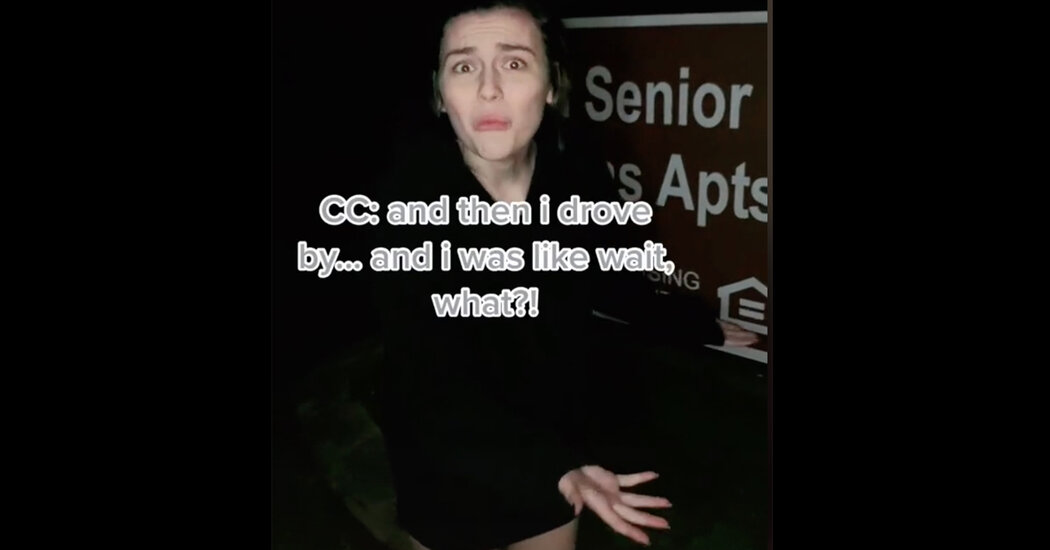 When Madison Kohout, 19, moved into her new apartment complex, she didn’t think much of the average age of her neighbors.

After all, she had scored a nice apartment in the northeast Arkansas City of Piggott after moving there from Oklahoma. About a week in her new home, however, Ms. Kohout saw a sign outside the 10-unit complex that she hadn’t noticed before.

“I was looking around at my surroundings to see what there was I could do here, and I saw the sign that said ‘Senior Living Apartments,’ and I realized I moved myself into a retirement community,” Ms. Kohout said in an interview. “Once I saw the sign, all the things clicked. I was like, ‘Oh, my goodness, I can’t believe I did this.’”

Ms. Kohout’s arrival at the apartment complex came after a connection she made over the past year through TikTok with Lori Parker of Piggott, who describes herself to her more than 65,000 followers as “a Preacher’s wife, Mom and Nonna.” The two followed each other on the social media platform, and they quickly developed a rapport by commenting back and forth on the videos they shared.

one TikTok post, she said she grew up supporting herself. After she said in one video that it had been a long time since she celebrated Thanksgiving with family, Ms. Parker invited her to Arkansas. Those plans fell through, but Ms. Kohout later met the Parker family in February.

“I just fell in love with her family, and they were so good to me,” Ms. Kohout said.

Ms. Parker eventually suggested that Ms. Kohout move to Piggott, about 100 miles north of Memphis, so she could be closer to the family. Ms. Parker and her husband, Shawn, have four children — the oldest is 31 and the youngest, 17, lives with them.

Ms. Kohout moved to Piggott from Norman, Okla., in March and started looking for apartments online.

There was not a lot of information about apartments in Piggott, so when she finally found a place and signed a month-to-month lease, she said, she had no idea she was going to be moving into a complex for older adults.

“She knew I was 19 but never said anything,” Ms. Kohout said of the landlord, who could not be reached for comment. “The landlord really liked me.”

Ms. Kohout has documented on TikTok.

Before moving to Arkansas, Ms. Kohout said she had about 30,000 followers on the social media app. Since then, as her TikTok updates from the apartment complex have drawn widespread attention, her follower count has increased to more than 92,000.

Ms. Kohout said that she had shown some of her TikTok videos to some of her neighbors, and that she enjoyed bonding with them and hearing their stories.

“It’s like having extra sets of grandparents,” Ms. Kohout said, adding that some of them check up on her, invite her over for dinner and even leave snacks at her door.

Ms. Kohout said she had connected with one neighbor in particular who had a similar experience growing up.

“It’s fun to see how she persevered through her life challenges,” Ms. Kohout said. “We relate a lot, even though she’s, like, 50 years older than I am.”

For now, Ms. Kohout plans to continue living in the complex and sharing her experiences with her TikTok followers. She hopes to write a book, she said, and would consider writing about what she’s learned from her new neighbors.

“They have a lot of stories that have definitely shaped my heart and have touched my heart, and I think a lot of people would benefit from them,” she said. “I got lucky enough to be able to hear them all.”

The Seattle Seahawks are very much still in the running for Baker Mayfield. (Photo by Stacy ... [+] Revere/Getty Images) Getty Images The Seattle … END_OF_DOCUMENT_TOKEN_TO_BE_REPLACED

LANSING, Mich. — At least 357 sitting Republican legislators in closely contested battleground states have used the power of their office to discredit … END_OF_DOCUMENT_TOKEN_TO_BE_REPLACED