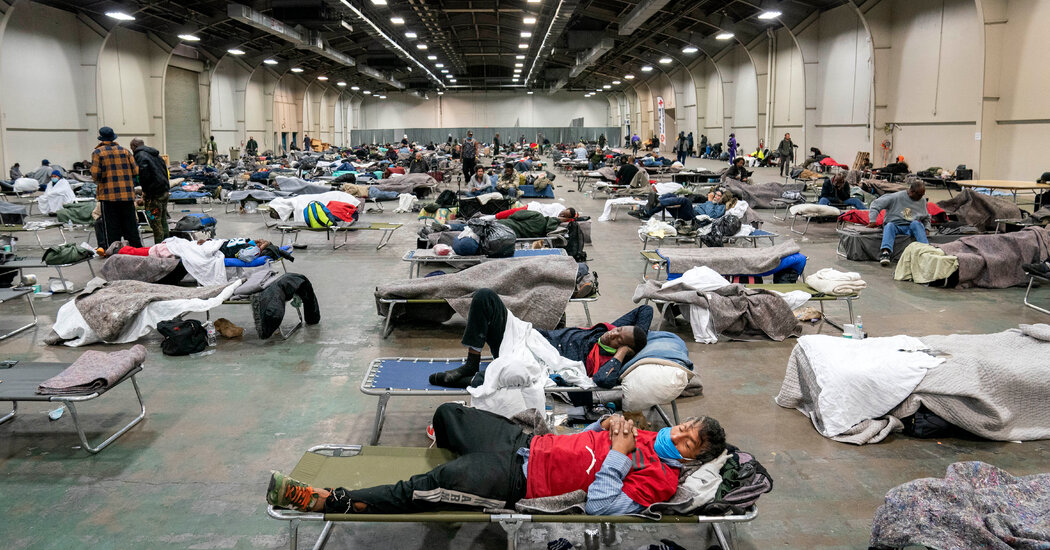 A tenacious winter storm that has already canceled flights, closed schools and created slick roadways across the South and the Midwest was expected on Friday to dump snow, sleet and ice upon the Northeast.

The Weather Service said on Friday that between 4 and 8 inches of snow had accumulated so far in pockets of New York State. Its office in Albany, N.Y., said early Friday morning that the city had started to see some sleet and freezing rain, and advised people to avoid driving if they could.

Buffalo and northern Vermont could see snow accumulation of up to 14 inches, according to the Weather Service, with six to 12 inches expected across central North Hampshire.

Continuing cold temperatures over the coming days will keep the roads icy. More than 2,800 flights into, out of and within the United States had been canceled on Friday, with the highest number of cancellations at Dallas Fort Worth International Airport, Boston Logan International Airport and La Guardia Airport in New York, according to Flight Aware.

“That sleet is going to be a bit more difficult to clean up because were not going to get much help from warm temperatures,” said Sarah Thunberg, a meteorologist with the Weather Service in Portland.

The winter storm warnings this week have affected more than 54 million people across the country, the Weather Service said. By Friday morning, the storm had knocked out power to more than 300,000 homes and businesses, primarily in Ohio and Tennessee.

told local reporters that eight people had been injured, including three critically.

In Memphis, ice began accumulating from a continuous freezing rain on Thursday, leading to traffic crashes, downed trees and power outages. Ice storm warnings were issued farther east, including in parts of western Tennessee and Kentucky.

The situation on the highways was more dire in Illinois, where a portion of Interstate 57 was blocked for several hours on Thursday after several tractor-trailers jackknifed.

In Texas, Gov. Greg Abbott called the storm “one of the most significant icing events that we’ve had in the State of Texas in at least several decades.” As of Friday morning, three to five inches of snow had fallen on some areas north and west of Fort Worth, Texas, according to the Weather Service.

The arrival of single-digit temperatures, snow and sleet in North Texas came nearly a year after an eight-day freeze caused widespread power outages, plunging the state into darkness and claiming the lives of more than 240 people.

AUSTIN, Texas--(BUSINESS WIRE)--As the first multifamily management company to be recognized in the Public Relations and Marketing Excellence Awards, … END_OF_DOCUMENT_TOKEN_TO_BE_REPLACED

There have been whispers of cooling housing and rental prices in the San Francisco Bay Area, but that hasn't yet translated into practical, noticeable … END_OF_DOCUMENT_TOKEN_TO_BE_REPLACED

Cars pass in Independence Square at twilight in Kyiv, Ukraine, Monday, Oct. 31, 2022. Rolling ... [+] blackouts are increasing across Ukraine as the … END_OF_DOCUMENT_TOKEN_TO_BE_REPLACED