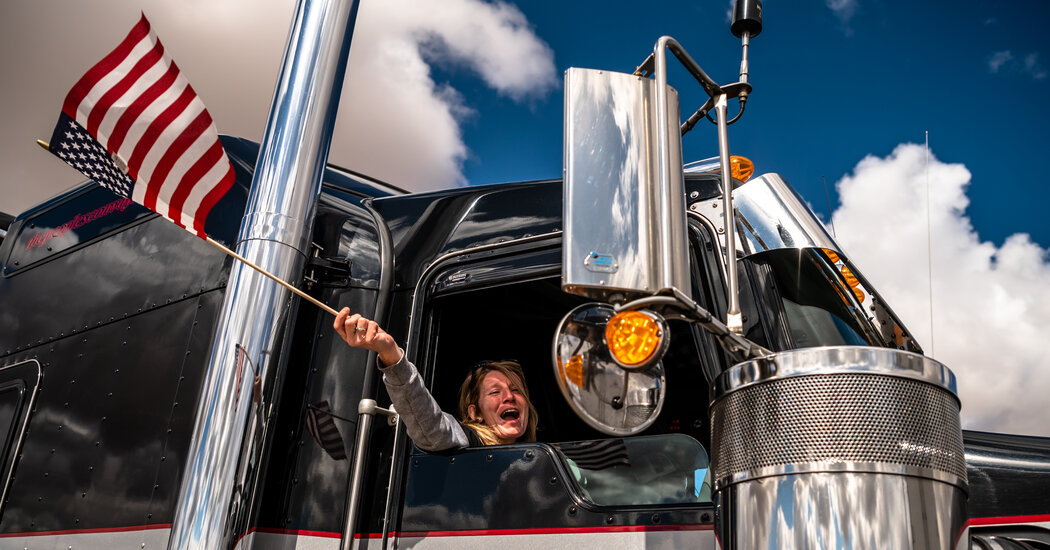 ADELANTO, Calif. — Though it was billed as a grass-roots, nonpartisan event intended to oppose government Covid-19 mandates, a trucker demonstration that left California for Washington, D.C., on Wednesday appeared to be tightly aligned with far-right organizations and activists.

Many of those behind the demonstration, which was planned as an American version of the past month’s chaotic Canadian protest, have connections to the violent attack on the Capitol in January 2021, or supported the lie that fraud in the 2020 presidential election was to blame for Donald J. Trump’s loss.

“We’re just trying to show what the people who back us believe — and our own beliefs — of what our country needs to go back to,” said Jeff Sandberg, a Republican truck driver from Texas whose vehicle was hauling a massive banner covered in slogans such as “We Will Not Comply!!” and “Let’s Go Brandon,” a meme created to insult President Biden.

Brian Brase, a convoy spokesman and Ohio-based truck driver, said the motorcade was expected to grow as the trucks wended across the country. “We believe tens of thousands will join in,” he said.

national emergency, meant to streamline the government response to the pandemic, that was first declared by Mr. Trump in March 2020 and recently extended by Mr. Biden. The protesters also want congressional hearings into the origin of the pandemic and an end to government health rules requiring masks and vaccinations, a move that has already begun as new cases have ebbed.

defending Representative Matt Gaetz, a Florida Republican and ally of Mr. Trump who is being investigated by the Justice Department, issued a call for participation in an American convoy that would start in Ohio and California and reach Washington on March 6.

videotaped the day before the riot rallying pro-Trump crowds with calls to kill any “alleged Americans” who might have helped undermine the 2020 elections.

Two hours northeast of Los Angeles, Adelanto is known chiefly for its prisons. Gabriel Reyes, the city’s part-time mayor — a Republican who operates a small currency trading and marketing business — said the city-owned stadium, which once hosted minor league baseball, was little used except for an annual cannabis festival, “Kushstock.”

discouraged use of the anti-parasitic drug ivermectin as a Covid-19 treatment, and Rob McCoy, a Republican politician and Southern California evangelical pastor who has gained prominence flouting pandemic rules and calling the state’s governor, Gavin Newsom, “Governor Newssolini.”

Ms. Dundas, who was the event’s M.C., said, “It’s been two years, and it is time to open this darn economy with no more restrictions on it.”

a bizarre plot to persuade the former president to use the military to seize voting machines in a bid to stay in power.

Yet another group, the American Foundation for Civil Liberties and Freedom, which is raising money for the truckers, hosted an event in Los Angeles last summer at which participants promoted baseless claims that there were widespread irregularities in the presidential voting results in Michigan.

Outside Adelanto, Mario Acevedo, who had stopped to wash the tires of his big rig on the way to Nevada, said he did not “have that time or luxury, unfortunately,” to skip work for the convoy.

“I got to provide for my family,” he said.

AUSTIN, Texas--(BUSINESS WIRE)--As the first multifamily management company to be recognized in the Public Relations and Marketing Excellence Awards, … END_OF_DOCUMENT_TOKEN_TO_BE_REPLACED

There have been whispers of cooling housing and rental prices in the San Francisco Bay Area, but that hasn't yet translated into practical, noticeable … END_OF_DOCUMENT_TOKEN_TO_BE_REPLACED

Cars pass in Independence Square at twilight in Kyiv, Ukraine, Monday, Oct. 31, 2022. Rolling ... [+] blackouts are increasing across Ukraine as the … END_OF_DOCUMENT_TOKEN_TO_BE_REPLACED