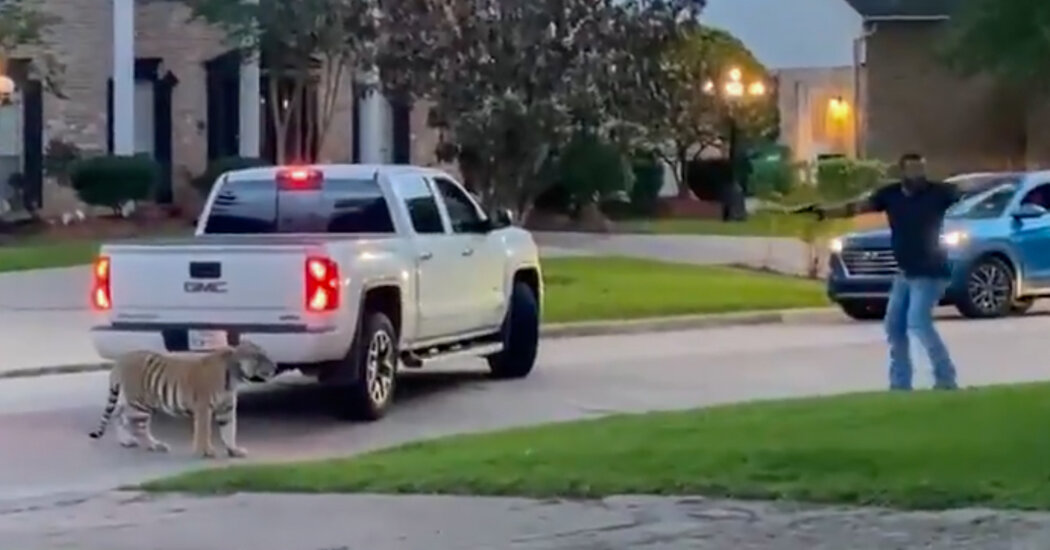 A Bengal tiger wandered through a residential neighborhood in Houston on Sunday, startling homeowners — at least one of whom drew his gun — and setting off a hunt for a man who drove off with the animal, and who the authorities said had been charged with murder and released on bond in a 2017 killing.

The man, Victor Hugo Cuevas, 26, was taken into custody on Monday night and charged with evading arrest, but the whereabouts of the tiger were still unknown, the Houston Police Department said on Twitter.

“Anyone with information on the tiger is urged to contact HPD Major Offenders,” the police said in a tweet.

Eyewitness videos taken on Sunday show the tiger sprawled on the lawn of a home on Ivy Wall Drive in West Houston.

classified as an endangered species, then got up and roamed into the street as onlookers took videos of it from a distance, and one off-duty sheriff’s deputy who lives in the neighborhood drew a handgun.

Mr. Cuevas, who the authorities said was the tiger’s owner and who had been leasing the home, emerged from the residence to corral the tiger. He kissed it as he led it away, a video shows. A lawyer for Mr. Cuevas said on Monday that he was not the tiger’s owner.

When the police arrived, Mr. Cuevas was in a Jeep Cherokee with the tiger, according to the authorities, who said the driver got away after a brief pursuit.

“Obviously, if you see a Cherokee with a big tiger in it, it would be good to call us,” Ronald Borza, a commander with the Houston Police Department, said at a news conference on Monday afternoon before Mr. Cuevas was taken into custody.

Commander Borza said that a city ordinance bars Houston residents from owning tigers, and that a violation is a misdemeanor.

The Houston Chronicle that his client did not own the tiger. He said that he could not elaborate on Mr. Cuevas’s connection to the animal.

“He was the one who captured the tiger, and that’s all we know right now,” Mr. Elliott told the newspaper.

Jose Ramos, who lives next door to the home where the tiger was spotted, said that he called 911 after seeing the exotic animal, the television station KPRC reported.

World Land Trust, which said that they are typically solitary animals and use the “stalk and ambush” method to track and attack prey.

“This is a small circle of folks that deal in exotic animals,” Commander Borza said. “Most of them know each other, from my experience.”

It’s a property that offers a unique open floor plan—plus a hot tub with a view.“It was a Methodist church located in a historic little area of St. … END_OF_DOCUMENT_TOKEN_TO_BE_REPLACED