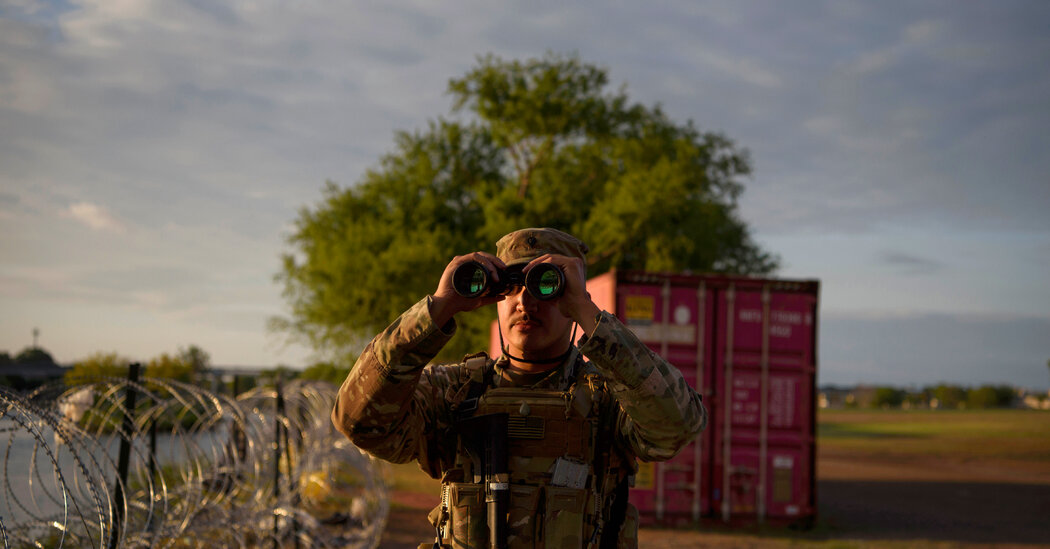 EAGLE PASS, Texas — From a camouflage Humvee at the edge of the Rio Grande, a Texas National Guard soldier on the front lines of Gov. Greg Abbott’s campaign to secure America’s southern border was watching a man with a crutch crossing the river from Mexico.

“Señor! Are you there?” the soldier called out as the man disappeared into a thicket of towering reeds. No one answered.

Downriver, four other soldiers stood by as a U.S. Border Patrol team detained dozens of newly arrived migrants in a pecan orchard. An agent with a crowd counter recorded 135 people, mostly men but also families from Cuba, Peru and Venezuela who were seeking asylum in the United States.

“This is it, every day,” said Hal Bowles, a Maverick County deputy constable who has been hired with new state funding to work on border security. “The governor is trying,” he said, but still, “everybody is coming in.”

The Biden administration has been dismissive of Mr. Abbott’s actions on the border, at times calling them a “political stunt,” and has not taken steps to intervene, despite calls from Texas Democrats to do so. Any attempt by Texas to enforce federal immigration laws would almost certainly end up in court.

Even as Mr. Abbott has directed more than $3 billion to border security, and approved an additional $500 million on Friday, he has little to show for it beyond drug seizures and arrest figures. The overlapping state actions have not held back the rush of arrivals.

Federal agents recorded nearly 129,000 crossings into Texas in March, about 11,000 more than during the same month last year, when Mr. Abbott began the effort known as Operation Lone Star. The biggest increase occurred in an area of the border that includes Eagle Pass, a sun-faded city of 28,000 people, numerous stray cats and dogs and few resources to spare.

Costs have been mounting. Just maintaining the National Guard deployment through the summer will require another $531 million, state officials said this month. A 22-year-old soldier assigned to the mission drowned last week while attempting to rescue two migrants in swift water.

And now officials in Texas are bracing for an even larger influx of migrants, who are expected to come when the Biden administration ends a pandemic policy of turning back many asylum seekers under the public health rule known as Title 42.

recent negotiations with leaders of Mexican border states that have resulted in promises of more aggressive policing on the Mexican side. The nonbinding agreements came after safety inspections ordered by Mr. Abbott snarled truck traffic for days, causing by some estimates as much as $4 billion in economic damage to Texas.

but told Congress on Wednesday that despite inheriting “a broken and dismantled system,” the administration had “effectively managed an unprecedented number of noncitizens seeking to enter the United States.”

According to Glenn Hegar, the Texas state comptroller, the increase in state police has helped ranch owners, who have complained of property damage from migrants. The police discouraged passing migrants from ransacking his ranch house near Eagle Pass when he was not there, as they did last year.

“Yes there’s still people,” he said. “But I feel as though people are passing through quicker and leaving less trash on the ground.”

Clusters of unauthorized migrants can still be seen wandering around town. Some find shelter in unoccupied homes.

Earlier this year, the town’s mayor, Rolando Salinas Jr., said he came upon a Nicaraguan couple and two children who had been staying in a home he was in the process of remodeling. “What are you doing here? This is my house,” he recalled saying. The man said they were waiting for someone to pick them up. Mr. Salinas called the Border Patrol and the police chief.

“It’s a sad situation,” Mr. Salinas said. “Nobody is saying that these people are criminals, but still you don’t know who they are.”

While some residents complain of an increase in panhandlers, crime has not worsened and those who come do not generally stay, said the city manager, George Antuna. “Most of the folks that come here are going north — D.C., Chicago, New York, Miami,” he said.

But it is the sheer number lately that has been overwhelming. “We’re not equipped for this,” Mr. Antuna said.

It has even strained smuggling networks, said Mr. McCraw, the state police director. “They’re running out of drivers,” he said, pointing to interviews with those charged with smuggling and Spanish-language TikTok videos seeking drivers to shuttle migrants from the border to cities like Houston.

“My view is what we’re succeeding at is securing zones” along the border, particularly in the Rio Grande Valley, where the number of illegal crossings has declined, Mr. McCraw said. “It’s like hot spot policing.”

In Eagle Pass, Border Patrol buses with asylum seekers now arrive in a constant stream at the main respite center, which had to move from its small downtown space to a cavernous, warehouse-like building. The number of migrants seeking services, said Valeria Wheeler, the director of the center, Mission: Border Hope, has ballooned to as many as 500 a day, from about 20 a day two years ago.

Still, many migrants who arrived there this week walked away frustrated at the lack of space. Some said they had to sleep on the concrete floor.

“Where are we all going to fit?” Diego Carmona, 28, wondered after he arrived at the end of a grueling five-month journey from Venezuela with his wife, 8-year-old son and 7-month-old baby.

Mr. Carmona said that as he crossed the river he feared his older son might be swept away. He said he could still hear him screaming, in Spanish, “Daddy, I don’t want to die,” as they traversed the unpredictable current. “It was the worst moment of my life,” he said — but they made it.

It was at a bend in the river, north of downtown, that a National Guard soldier from outside Dallas, Specialist Bishop Evans, had been stationed with a partner when he spotted a man and a woman struggling in the river as they crossed from Mexico. He rushed to help them, jumping several feet off the high banks into the fast-moving water.

Specialist Evans drowned. The two migrants, whom state officials have said were involved in drug trafficking, survived and were taken into Border Patrol custody.

No National Guard members were posted on the high flat ground on a recent overcast day. Below, the river churned near a path littered with discarded clothes and other items from migrants who had recently passed through.

Daniel Acker | Bloomberg | Getty ImagesHome prices are softening in most markets across the nation.Yet home prices are still higher compared with a … END_OF_DOCUMENT_TOKEN_TO_BE_REPLACED

Joel Silver has been responsible for some of Hollywood's biggest franchises, including "The Matrix," "Die Hard," "Predator," and "Lethal Weapon."So … END_OF_DOCUMENT_TOKEN_TO_BE_REPLACED