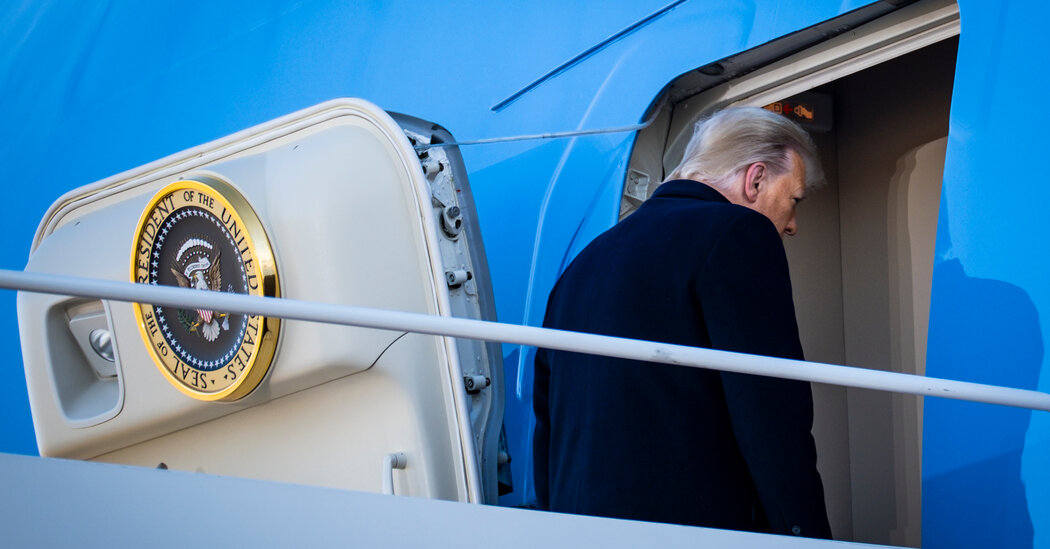 WASHINGTON — One hacked the computers of business rivals. One bribed doctors to win referrals for his nursing homes.

Another fled the country while he was on trial for his role in a fraud that siphoned $450 million from an insurance company, leading to its collapse. Still another ran a Ponzi scheme that plunged a synagogue into foreclosure.

They also had something else in common, an investigation by The New York Times found. The efforts to seek clemency for these wealthy or well-connected people benefited from their social, political, or financial ties to a loose collection of lawyers, lobbyists, activists and Orthodox Jewish leaders who had worked with Trump administration officials on criminal justice legislation championed by Jared Kushner.

That network revolved around a pair of influential Jewish organizations that focus on criminal justice issues — the Aleph Institute and Tzedek Association — and well-wired people working with them, including the lawyer Alan M. Dershowitz, Brett Tolman, a former U.S. attorney for Utah, and Nick Muzin, a Republican operative.

her own drug conviction pardoned by Mr. Trump, was credited by the White House for championing 13 clemency grants, many of which went to drug offenders and African-American defendants given disproportionately long prison terms.

sentenced in 2005 to two years in prison for tax evasion, witness tampering and lying to the Federal Election Commission.

When Charles Kushner, a donor to Aleph, received a pardon from Mr. Trump in December, the White House cited Mr. Tolman’s support for the decision.

nearly $6.9 million for the 12 months ending in fall 2019, the spokesman said, adding that neither money nor religious affiliation played any role in its decisions about clemency cases.

Aleph minimized its connection to Tzedek’s clemency work and said it was misleading to describe the organizations as part of a clemency network, while noting that clemency was only a small part of the group’s work.

Ari Weisbrot, a New Jersey litigator, said he had seen both sides. The humanitarian work Aleph did in prisons, Mr. Weisbrot said, was overshadowed by the advocacy it offered to people like Eliyahu Weinstein, who was convicted of running a Ponzi scheme that stole millions of dollars from clients represented by Mr. Weisbrot — money that has never been returned.

Aleph had sought leniency for Mr. Weinstein at his sentencing in 2014. When Mr. Trump commuted Mr. Weinstein’s 24-year sentence in January, the White House credited Mr. Tolman, Mr. Dershowitz and the Tzedek Association as well as an array of lawmakers and activists for the decision.

“I have dealt with groups like Aleph in other situations where they have been amazing and unbelievably helpful,” Mr. Weisbrot said. “But once you turn from helping people who need help to helping people who have proven themselves unworthy of help, you are no longer a public service, but rather an instrument that enables wrongdoing.”

taught that incarceration is inhumane, and worse than death in certain respects, because it deprived prisoners of the ability to contribute to society, though he acknowledged the need to incarcerate people who were dangerous to others.

Aleph has worked for years to limit jail time in specific cases.

Some of that work has drawn criticism from crime victims, legal experts and some prosecutors.

Aleph urged a judge to impose an intensive program of “rehabilitative public service” — rather than a lengthy prison sentence — for Sheldon Silver, the disgraced former leader of the New York State Assembly and one of the country’s most prominent Orthodox elected officials, after Mr. Silver’s conviction on corruption charges.

Rabbi Margaretten of the Tzedek Association would later be among the influential figures who urged Mr. Trump to grant clemency to Mr. Silver; Mr. Trump abandoned plans to do so after reporting by The Times.

Over the years, Aleph also built a powerful network of prominent supporters and allies in the legal world. Its website features testimonials from the former F.B.I. director Louis Freeh and the former attorney general Michael B. Mukasey — both of whom have supported clemency applications brought by the group.

Mr. Dershowitz, one of the country’s best-known criminal defense lawyers, began volunteering his legal services to the group in the 1980s, he said. When Mr. Dershowitz turned 80 in 2018, Aleph reportedly honored him with a star-studded dinner party in Manhattan.

laundering money for a Colombian drug cartel in the 1990s, was among those pardoned by Mr. Trump in January. Aleph said it did not push for Mr. Adjmi’s pardon. Harry Adjmi declined to comment.

“Virtually every clemency case I’ve dealt with, I had some contact with Aleph,” Mr. Dershowitz said.

Mr. Dershowitz also began working with the Tzedek Association in the final weeks of Mr. Trump’s presidency. While he had sought clemencies under several presidents, Mr. Dershowitz had more success under Mr. Trump than under every past president combined.

reportedly donating to a lobbying effort by Rabbi Margaretten to change federal sentencing laws after meeting with him in 2012.

The Kushner family’s charitable foundation, where Mr. Kushner was a director, donated more than $188,000 to Aleph from 2004 to the end of 2017, according to the foundation’s tax returns. The foundation also donated more than $254,000 — primarily to benefit the needy — to the Shul of Bal Harbour, Rabbi Lipskar’s synagogue in Surfside, which shares an address with the Aleph Institute.

convicted in 2009 of bank fraud after hundreds of undocumented immigrant workers were arrested in a raid the year before at the meatpacking plant he oversaw.

Mr. Muzin arranged a call for Mr. Dershowitz, Jewish leaders in Texas and others to win support for the White House sentencing overhaul from Mr. Cruz, a key Republican holdout. He came out in support of the bill, known as the First Step Act, which was signed into law by Mr. Trump in late 2018, and led to the release of thousands of nonviolent drug offenders, as well as some white-collar criminals supported by the network.

arrested in Austria and extradited to the United States to serve an 845-year sentence.

“The case had been discussed for years in the White House and was a key priority for criminal justice advocate groups, but it had met some resistance and wasn’t moving,” Mr. Muzin said. He brought the request to the White House chief of staff, Mark Meadows.

With hours left in his term, Mr. Trump commuted Mr. Weiss’s sentence, and, when Mr. Weiss was released after serving 18 years in prison, he was greeted by Rabbi Margaretten.

Mr. Weinstein still had years to serve when Barry Wachsler, a Long Island businessman, paid Mr. Muzin and a colleague at least $75,000 to begin lobbying the Trump administration for his release. Mr. Wachsler said that after getting to know Mr. Weinstein during visits to the prison where Mr. Weinstein was serving, he grew incensed by what he regarded as Mr. Weinstein’s unfair treatment.

Mr. Wachsler said he became part of a broad group of supporters who worked to help Mr. Weinstein, but said he did not want to name others without permission.

“Collectively, people put together the money and it was paid,” he said.

But Mr. Wachsler acknowledged that one of the people helping out was a friend of his from Long Island named Yitz Grossman, a businessman with his own record of white-collar fraud convictions. Late last year, Mr. Grossman began approaching victims of Mr. Weinstein to see if they would consider writing letters to support his clemency petition.

Ruth Brandt, a Los Angeles philanthropist who lost $1 million to Mr. Weinstein, said that Mr. Grossman presented himself as someone who had served in prison with Mr. Weinstein and believed his lengthy sentence was unjust.

reporting by The Times — that Mr. Dershowitz was also involved in the effort to help Mr. Weinstein win clemency. She emailed him in January to complain.

Mr. Dershowitz defended his work, according to emails viewed by The Times, saying that he had been asked to help Mr. Weinstein and that “In Europe and Israel his sentence would have been 5 years.”

largest health care fraud case charged by the Justice Department, his father, himself a rabbi, donated $65,000 to the Aleph Institute over several years. The father, who also made smaller donations to the Shul of Bal Harbour, said during his son’s sentencing in 2019 that he would make additional contributions to a mental health organization with which Aleph had planned to team up, and at which Mr. Esformes’s lawyers suggested he could perform community service instead of a long prison sentence.

The Aleph spokesman said the donations to the group ended before it began pushing for his son’s clemency. Mr. Trump commuted Mr. Esformes’s sentence just before Christmas.

After Ariel Friedler was released in 2014 from a two-month prison sentence for conspiring to hack into computer systems of competitors of his education software company, he donated to funds at the Shul of Bal Harbour for scholarships and the needy. He also donated to the Aleph Institute and volunteered his time and software management expertise.

An Aleph official wrote to the Florida bar association in 2017 to get Mr. Friedler’s law license reinstated, explaining that Mr. Friedler had recommended changes that had allowed “the organization to grow exponentially,” and later wrote a letter to the White House supporting a pardon for him. When the pardon came, in February 2020, White House officials credited Aleph.

The poshest place in California's Coachella Valley is The Madison Club. This exclusive gated community in La Quinta is where A-listers and tycoons … END_OF_DOCUMENT_TOKEN_TO_BE_REPLACED

KOROPY, Ukraine — Four men tugged at long strips of fabric to lift a coffin out of the gaping hole in the backyard of a small house. They flung the … END_OF_DOCUMENT_TOKEN_TO_BE_REPLACED