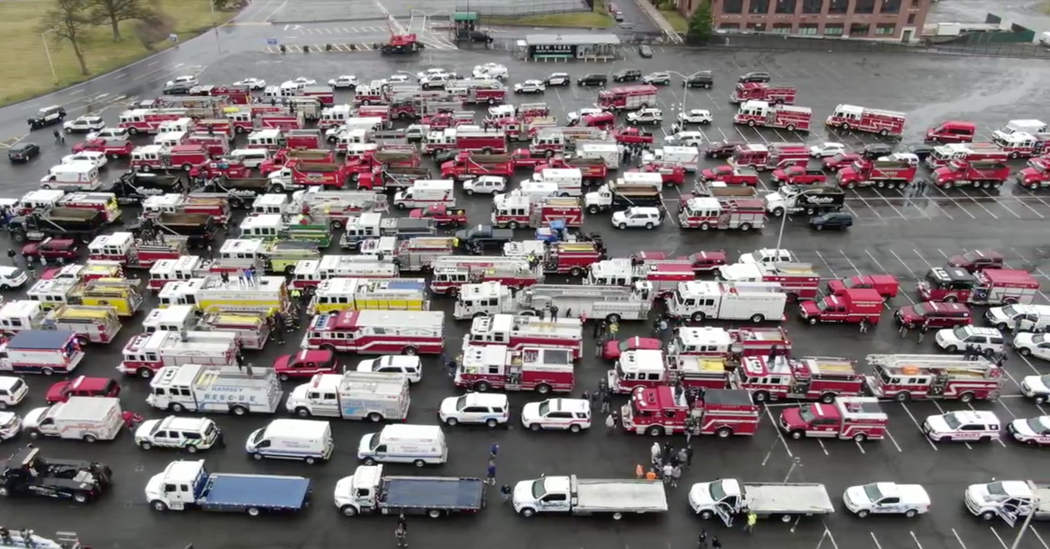 Mr. Lloyd, who had been a Rockland County firefighter for more than 15 years, radioed a call for help from inside the Evergreen Court Home for Adults in Spring Valley, N.Y., before the building collapsed on Tuesday, the authorities said.

Logan, who was still absorbing his father’s death, didn’t know if any fire truck was coming for his birthday, Chief Conjura said. But as the huge procession of vehicles left the lot and headed to the boy’s street, Chief Conjura told Logan to come outside.

It was gray and rainy, and the sound of the sirens came first.

Then the vehicles arrived, a long, snaking river of flashing red, white and blue lights through the streets of Nanuet.

The vehicles seemed to stretch for miles — fire engines from Monsey, police cars from Orangetown, ambulances from Stony Point, dump trucks from MCM Paving & Excavation from West Haverstraw — and so many more from so many places.

Logan watched as the vehicles rolled by his house for more than 40 minutes, stopping occasionally so firefighters could hand him presents.

“It was unbelievable,” Chief Conjura said. “He was super excited. He was very happy.”

On a day of mourning and loss, the procession, Chief Conjura said, was about answering a call to service.

Whether you optimistically hope that mortgage rates will decline or are resigned that rates will stay elevated above the historic lows of 2021, you … END_OF_DOCUMENT_TOKEN_TO_BE_REPLACED