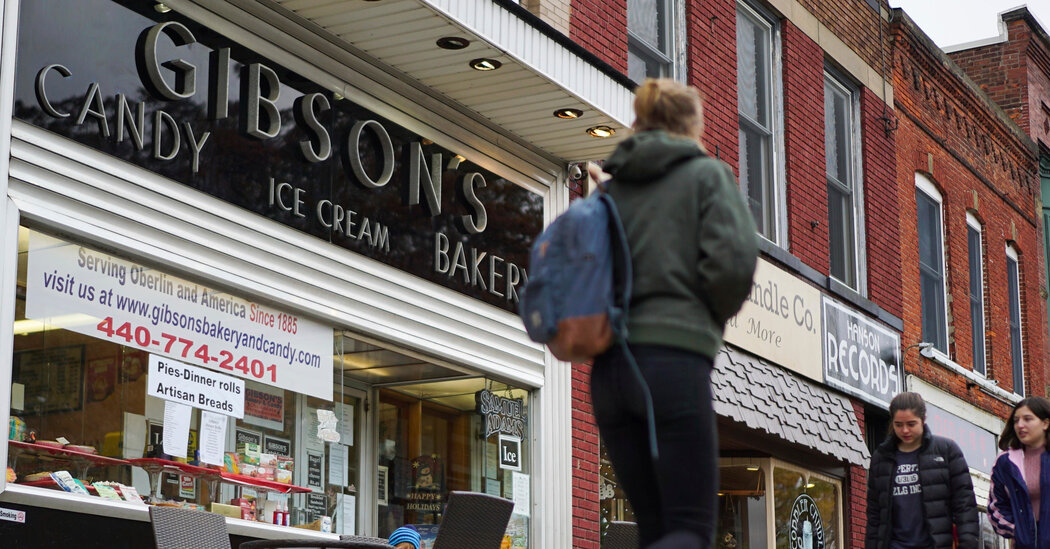 Oberlin College, known as a bastion of progressive politics, said on Thursday that it would pay $36.59 million to a local bakery that said it had been defamed and falsely accused of racism after a worker caught a Black student shoplifting.

That 2016 dispute with Gibson’s Bakery resulted in a yearslong legal fight and resonated beyond the small college town in Ohio, turning into a bitter national debate over criminal justice, race, free speech and whether the college had failed to hold students to account.

The decision by the college’s board of trustees, announced Thursday, came nine days after the Ohio Supreme Court had declined to hear the college’s appeal of a lower-court ruling.

overall cost of attendance tops $80,000 a year. The college is also very much part of the town, which is economically dependent on the school and its students. The bakery, across the street from the college, sold donuts and chocolates, and was considered a must-eat part of the Oberlin dining experience.

The incident that started the dispute unfolded in November 2016, when a student tried to buy a bottle of wine with a fake ID while shoplifting two more bottles by hiding them under his coat, according to court papers.

confirmed the jury’s finding, after a six-week trial, that Oberlin was liable for libel, intentional infliction of emotional distress and intentional interference with a business relationship — that it had effectively defamed the business by siding with the protesters. The original jury award was even higher, at $44 million in punitive and compensatory damages, which was reduced by a judge. The latest amount consists of about $5 million in compensatory damages, nearly $20 million in punitive damages, $6.5 million in attorney’s fees and almost $5 million in interest.

In its ruling, the Court of Appeals agreed that students had a right to protest. But the court said that the flier and a related student senate resolution — which said that the store had a history of racial profiling — were not constitutionally protected opinion.

“The message to other colleges is to have the intestinal fortitude to be the adult in the room,” Mr. Plakas said in an interview after the jury had awarded damages in June 2019.

After the 2019 jury award against Oberlin, Carmen Twillie Ambar, the college president, said that the case was far from over and that “none of this will sway us from our core values.” The college said then that the bakery’s “archaic chase-and-detain policy regarding suspected shoplifters was the catalyst for the protests.”

But in its statement on Thursday, Oberlin hinted that the protracted and bitter fight had undermined its relationship with the people and businesses in the surrounding community.

“We value our relationship with the city of Oberlin,” its statement said. “And we look forward to continuing our support of and partnership with local businesses as we work together to help our city thrive.”

Hometown Deli, Paulsboro, N.J.Mike Calia | CNBCThree men were charged with fraud and other crimes in a scheme involving a company that was worth $100 … END_OF_DOCUMENT_TOKEN_TO_BE_REPLACED

The childhood home of "The Morning Show" actor Nestor Carbonell recently hit the market in Greenwich, CT, for $4.4 million.Fans will appreciate that … END_OF_DOCUMENT_TOKEN_TO_BE_REPLACED