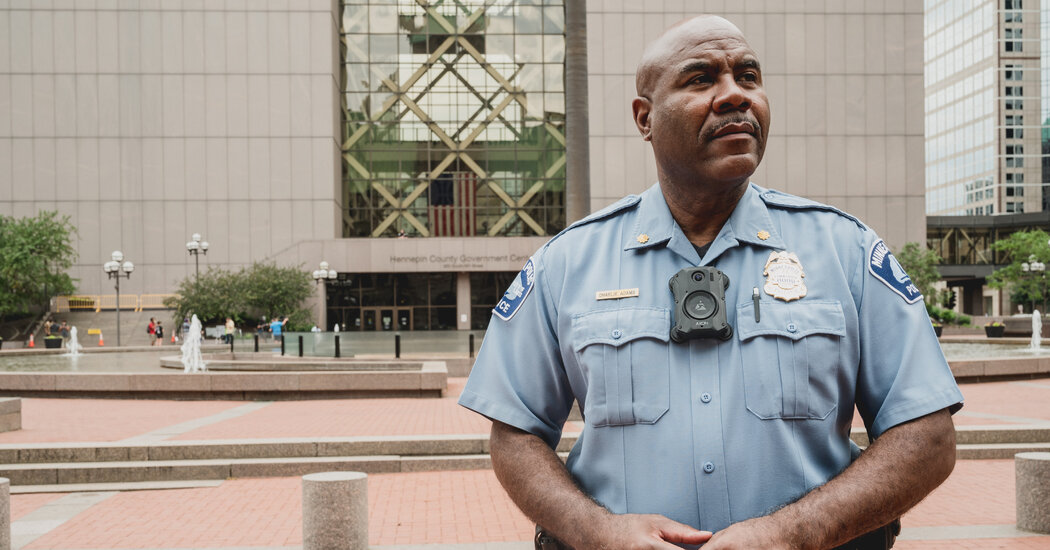 MINNEAPOLIS — It was shortly after 4 p.m. on Tuesday, and all chatter ceased in the roll-call room for the Fourth Police Precinct in North Minneapolis. Everyone’s attention was glued to the television on the wall.

Then came the verdict: Derek Chauvin was guilty on all counts, including murder, for killing George Floyd last May. The station house stayed silent, the officers processing what the verdict meant after a year of tension and conflict, said Inspector Charles Adams, the precinct’s commanding officer.

For him, it was a relief — he felt that Mr. Chauvin had been wrong and that his actions, kneeling on Mr. Floyd’s neck for more than nine minutes, cast a negative light on policing.

But the verdict did little to end months of upheaval and anxiety in his profession.

“So much is being thrown at us as law enforcement officials,” Inspector Adams said. “We’re unsure how we’re going to police in the future.”

Inspector Adams said that several officers were now hesitant to perform even some of the most basic duties like traffic stops, worrying that such situations might escalate and get them in trouble.

In New York, a union leader seemed to play on such anxieties.

“It is hard to imagine a tougher time to be a member of the law enforcement profession,” Ed Mullins, the president of the Sergeants Benevolent Association, wrote in a letter after the verdict was announced. He warned members that their every action was being recorded and that “scores of attorneys” were eager to sue them.

“Our elected officials are complicit in perpetuating the myth that we are the enemy,” he added.

Attitudes like that, activists said, speak to the resistance of law enforcement to be held accountable and allow police abuses to continue.

Some police officials said the backlash to Mr. Chauvin’s actions actually provided an opportunity to improve.

“I think it takes us a step closer toward reform,” said Michael S. Harrison, Baltimore’s police commissioner. “It doesn’t make it harder to do our jobs. It makes it where we have to train better, and use best practices and we have to do our job the right way.”

The guilty verdict was a significant reminder for officers to stay within their training, said Rick Smith, the police chief in Kansas City, Mo.

“I think officers understand that going outside the norms leads to potential issues,” he said. “And this one highlighted that in the hundredth degree across the nation.”

Inspector Adams said he believed that the judicial process ultimately helped the profession regain some of its credibility. Nine current and retired members of the Minneapolis Police Department testified against Mr. Chauvin at trial, including the police chief.

That testimony, Inspector Adams said, showed the public that Mr. Chauvin was not representative of the Minneapolis police. The prosecution’s assertion during closing arguments that its case was against Mr. Chauvin, not the police, also helped, he said.

After Chief Medaria Arradondo testified that Mr. Chauvin acted outside of department policy, Inspector Adams said he texted him to say he was proud to belong to his staff.

Three men were indicted in the death of the notorious gangster James (Whitey) Bulger, who was beaten to death four years ago in a West Virginia … END_OF_DOCUMENT_TOKEN_TO_BE_REPLACED

Dr. Connolly and Dr. Mott live in the North Baltimore neighborhood of Homeland, known for its strong public schools and colonial architecture, which … END_OF_DOCUMENT_TOKEN_TO_BE_REPLACED